No wonder India stands on top in the global list of whiskey consuming countries. Traditionally, most whisky consumption is of lower end Indian whiskies. However, with better standard of living, Indian consumers are also opened to best whisky brands in world such as Johnnie Walker, Chivas Regal and Black Dog. They are now appreciating the varied nuances taste and complexity profiles these premium whiskies have to offer. So, let’s talk about whisky market in India by analysing India import statistics of whisky recorded between April and June 2017. 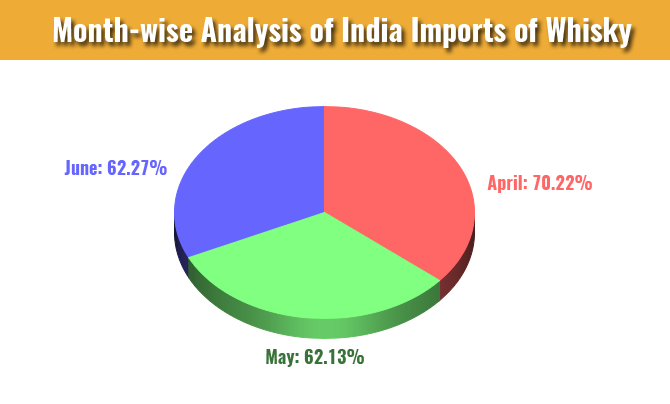 India recorded highest whisky import figures of Johnnie Walker brand between April and June 2017. The total share in value of this brand stood at 20.84%. Chivas Regal and Black Dog stood as 2nd and 3rd largest brand of whisky imported by India in the said period. The chart and table below shows 5 largest whisky brands imported into India in Q2 of 2017. 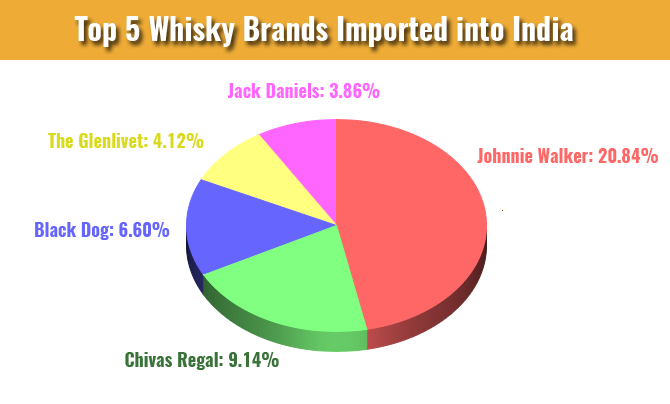 India’s imports of whisky were the highest from the United Kingdom in Q2 of 2017. From 62.10% total share in value of all exporter countries of whisky to India, UK shared 55.32% value. United States and United Arab Emirates stood as the 2nd and 3rd largest supplier country of whisky to India.

As per whisky customs data, India registered maximum import shipments from Nhava Sheva port, which is located in Maharashtra. Among all types of alcoholic drinks, whisky shared 62.10% shipments from all ports in India, in which 31.83% shipments were from Nhava Sheva port only. Tuglakabad ICD and Chennai Sea port stood as 2nd and 3rd largest Indian port were maximum shipments of whisky arrived between April and June 2017. Their share in value recorded 15.66% and 5.45% respectively. Total USD 43916120 shipments of whisky entered into all ports of India in the said period. Below are the import values of these three Indian ports.

How to import whisky in India? After GST (Goods and Services Tax) implementation in India, tax structure of the country has changed. Few custom duties such as CVD and SAD have been subsumed, while new import duty like Integrated Goods and Services Tax (IGST) has been put in place. So, for importing whisky in India, having answers of some questions such as how to calculate import duty on whisky in India after GST and how to find foreign suppliers of whisky is important. All these and much more about whisky import in India can be found at Export Genius, a leading market research and business intelligence source. It provides 100% authentic whisky import data of India, besides customs data of multiple products and countries.

Besides whisky, calculate import duty on foreign liquor in India and other alcoholic drinks imported into India by click on India Custom Duty on Alcoholic Drinks.