Which Countries are the Largest Buyers of Indian Banana?

India is the largest producer of banana, which contributes around 28% share in the world’s banana production. Despite this fact, India still ranks 20 in the list of largest banana exporting countries globally. Why? It is because India is also one of the biggest banana consuming countries. A new market research report on banana export from India in 2017 shows that it exported bananas valued USD 48 million to countries around the world, especially to the Middle-East countries. In fact, India gives maximum banana supplies to the United Arab Emirates, followed by Oman, Saudi Arabia, Iran, Kuwait, Qatar, Bahrain and Iraq. How much export business of banana India did in these countries during 2017? Let’s find out by making a list of 10 largest countries to which India supplied bananas with the help from India export statistics of bananas recorded in the year 2017.

India’s target point to export bananas is Middle East. In 2017, the country exported bananas worth USD 48 million to this region. Among largest buyers of bananas from India, the United Arab Emirates stood on the top, which shared 31.58% value. Here is check on biggest Middle East countries to which India supplied bananas in 2017. 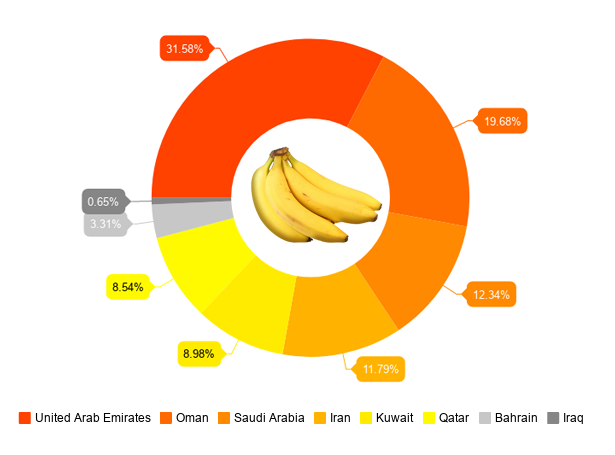 India exported bananas worth USD 15381297 million to the United Arab Emirates in 2017, which was the largest among countries. It shared 31.58% value to total exports. India’s banana export company, Fair Export India Pvt. Ltd. supplied bananas mostly to UAE, which did 5.24% export business of bananas in UAE.

Oman stood as India’s 2nd largest export partner of bananas, which purchased bananas worth USD 9586085 million from the country in 2017. Its share in value recorded 19.68%. Among top banana suppliers in India, INI Farms did maximum business in Oman, which registered 2.59% share in value during this year.

In Middle East region, Saudi Arabia held 3rd position in the India’s exports of banana (HS Code 0803). The country purchased bananas worth USD 6012705 from India in 2017 with 12.34% share in value. In the list of banana sellers in India, Mayi Industries gave maximum banana supplies to Saudi Arabia.

Iran shared 11.79% value to India’s total banana exports in 2017. The country supplied bananas of USD 5741004 worth to Iran in this year. In this list of fresh banana exporters in India, White Globe did the highest business of banana in Iran.

India’s 5th largest export partner of banana was Kuwait in 2017. Between Jan and Dec 2017, India supplied bananas valued at USD 4376288 to Kuwait, which registered 8.98% share in value. Among top banana exporters in India, Bandhan Agritech Private Limited gave the highest supplies of bananas to Kuwait importers.

Qatar stood at sixth position in the list of 10 largest foreign countries of India’s banana exports during. It purchased bananas valued USD 4158076 million from India in 2017. Its share in value recorded 8.54%. Fair Export Pvt. Ltd., banana export company India, also did good banana export business in Qatar, besides in the United Arab Emirates.

Among top foreign countries of India banana exports, Bahrain stood at seventh position, which recorded 3.31% share in value during 2017. The country purchased banana valued USD 1612558 from India in the said year. In the list of leading exporter of bananas in India, Original Foods supplied bananas the highest to Bahrain buyers.

Besides Middle East countries, Maldives stood as the top foreign country of India’s banana exports. According to India export data of banana, Maldives purchased bananas worth USD 647698 million from India in 2017. Its share in value recorded 1.33%. Among largest exporter of bananas in India, Finesse Market Link registered the highest exports of banana to Maldives during 2017.

Iraq ranked 9 in the world’s top importer countries of India’s bananas during 2017. It recorded USD 314228 value and 0.65% share in value in the said year. Apart from Kuwait, Indian supplier of bananas, Bandhan Agritech Private Limited also did banana business in Iraq as well.

If you want to buy India export data of bananas with authentic shipment records, refer to Export Genius, a leading market research company. It provides import export data of 60+ countries and research-based reports of 20+ countries.