Which are India’s Top Export Destination Countries of Honey?

India is one of the largest honey producers and exporters in the world and plays an important role in the world honey products and trade. The change of global honey production and trade affects the development of Indian agriculture. Honey Exports from India 2017 is a market research report, prepared by Export Genius, providing a wider and clear picture of India’s export market of honey. As per this report, India’s exports of honey valued at USD 80 million in 2017, which increased from 2016’s USD 70 million. India largely exports honey to the Unites States of America. Let’s have a look at top 5 countries to which India supplied honey in 2017.

Honey is a natural product that has no substitute. It is defined as a sweet liquid prepared by honey bees from nectars of plants. India has been known as ‘land of honey’ since centuries as it is used to treat a variety of ailments through a wide range of applications. Major honey producing states in the country include Punjab, Tamil Nadu, Bihar and West Bengal. However, good quality honey in India reportedly comes mainly from the states of Jammu and Kashmir and Himachal Pradesh.

China is the largest producer of honey, followed by Argentina and the United States of America. Despite the fact that USA is the 3rd largest producer of honey, it is also the top importer of honey. In exports, China supplies honey the most to the world. Talking about India, which is the 13th largest exporter of honey in the world, the country gives the highest honey supplies to the United States of America. Here is the list of countries to which India exported honey in 2017. 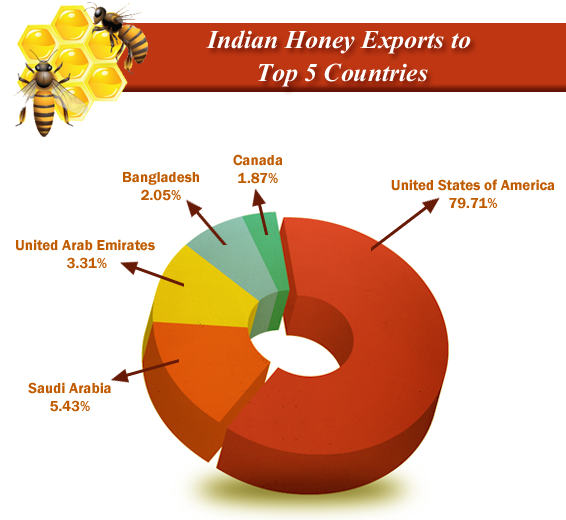 A host of institutions have been set up both by the government of India and the state government to promote export of honey. Agricultural Products Export Development Authority (APEDA) under the aegis of the Ministry of Commerce and Industry, government of India is the nodal agency to promote exports of honey. A lot of work has been done on honey related issues like Indian bees and beekeeping by individuals and agricultural institutions. For example, the Central Bee Research and Training Institute, Khadi and Village Industries Commission (KVIC) not only contributed to the science of bees, bee plants and beekeeping but also developed several appropriate technologies suited to Indian beekeeping.

India Exports Honey to US 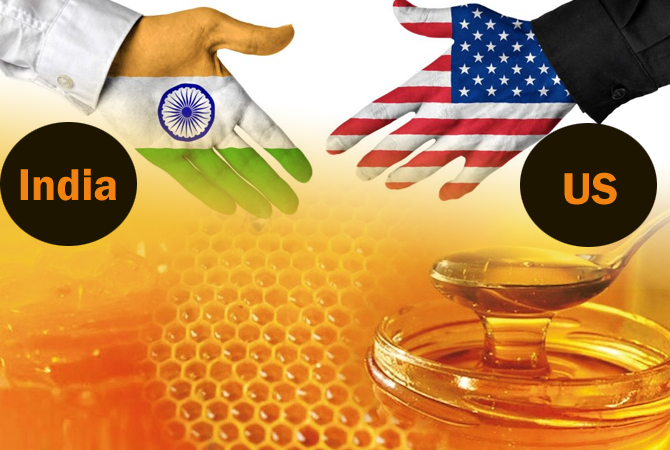 According to Export Genius report on honey export data of India, the country supplied honey mostly to the United States of America. India’s exports of honey to US valued at USD 64 million in 2017 with 79.71% market share. From India’s Delhi region, the highest honey shipments amounted to USD 48 million departed for USA. Its share in value recorded 59.7%. Among pure honey suppliers in India, Kejriwal Bee Care India Private Limited maximum supplied honey to the US buyers, which contributed 22.92% to total India’s honey exports. Get full list of honey companies in India from our report.

For Indian suppliers of honey and US importers of honey, our report can help in finding the best companies to do honey export business. Our data is loaded with India export statistics of honey 2017 received by various customs and other authentic sources. So, if you want to export honey to the US, you can buy our data at the best possible prices. Thus, US importer of honey can do business with the best honey company in India A sample given below shows data fields of a honey shipment, which departed from India to the US in 2017. 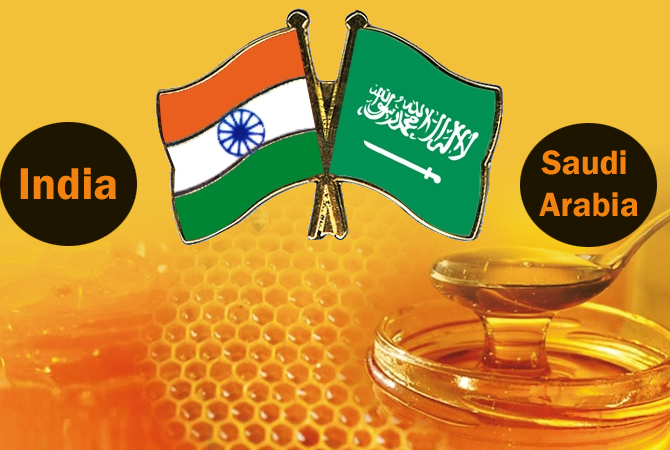 For honey importers in Saudi Arabia, our report can help in finding the trusted honey exporters in India with their contact details and thus, they can have best honey business opportunity in India. Look at the sample below to know which columns are covered in honey export data of India to Saudi Arabia.