Vietnam’s tuna exports in 2017 valued at US$ 322 billion, which rose sharply from the previous year. As per Export Genius report on tuna export data of Vietnam, country largely supplied tuna products to the United States of America and the European Union. Tuna, which comes under HS Code 030487, is concentrated mainly in the Central Vietnam and the center of East Sea. The main varieties of tunas in Vietnam are – Yellowfin Tuna, Big-eye Tuna and Skipjack Tuna. Yellowfin tuna and big-eye tuna have average stock of more than 45 thousand MT, with annual catch of 17,000 to 21,000 MT.

Yellowfin tuna and big-eye tuna are caught in the 6 month period from December to June of the next year. While skipjack tuna can be caught all year round. Tuna output in the EEZ of Vietnam is estimated at 27,000 MT. Binh Dinh is the top tuna catching province with 9,400 MT, followed by Khanh Hoa with 5,000 MT and Phu Yen with 4,000 MT. 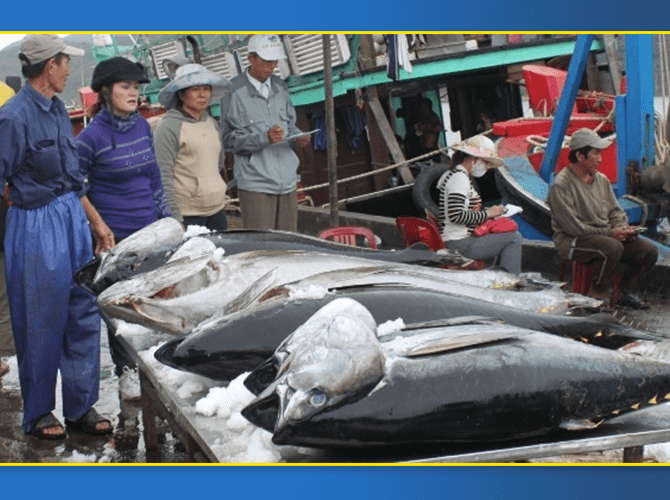 As per report on Vietnam seafood industry, the country supplied tuna products worth US$ 322558 million in 2017. The country exported tuna to 111 markets during this year, up 16.3% compared to 2016. Top 8 markets of Vietnamese tunas are – USA, EU, Israel, ASEAN, Japan, China, Mexico and Canada, which accounted for 88.2% of the total export value. Basically, tuna falls under two Harmonized System Codes, i.e. 03, which is fresh & frozen tuna and other is 16, which is canned & other processed tuna.

Major Importers of Vietnamese Tuna in 2017

Vietnam exports tuna to 79 countries and territories across the globe, among which, the major eight Vietnamese tuna importers are the US, the EU, Israel, ASEAN, Japan, Canada, Mexico and China. The United States of America stood as the largest buyer of Vietnamese tunas, which shared 38% value in total exports in 2017. Here are top countries that imported tunas from Vietnam in the said year. 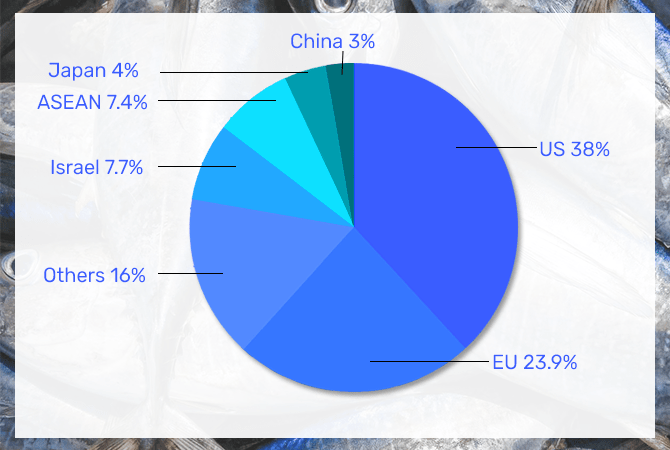 How to Get Complete Shipment Records of Tuna Exports from Vietnam?

Apart from Vietnam customs data with shipment records, we also provide market research reports on product specifications. For instance, we can provide customized report on Vietnam exports tuna, which includes analysis of country’s tuna market with graphical presentation. So, whether you want tuna shipment data of Vietnam of a particular year or business intelligence report on tuna exports from Vietnam or both, simply connect with our sales representatives and let us know your data requirements.] 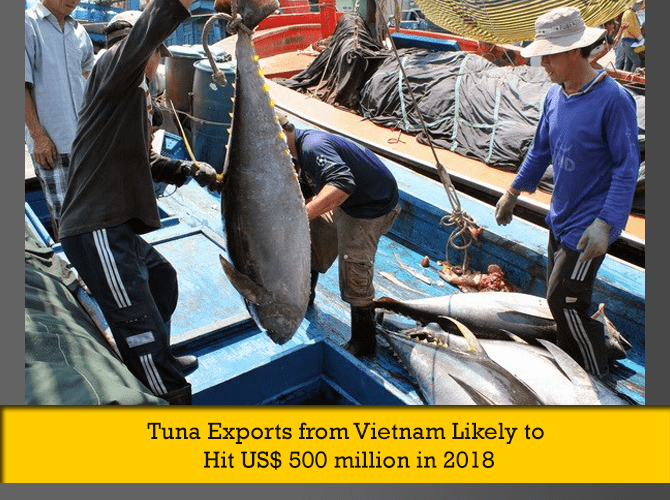 According to the Vietnam Association of Seafood Exporters and Producers (VASEP), revenue of Vietnam’s tuna exports is likely to reach US$ 500 million in 2018 as figure has already reached US$ 351 million in the first seven months of this year. Vietnam shipped US$ 116.3 million worth of tuna in the said period, which registered a down of 8.9% year on year. The European Union recorded a rise of 23.7% to US$ 82.71 million and a surge of 55.7% in the Israeli market to US$ 42.35 million.

The US-China trade war is escalating as both sides implement taxation policies on imported goods. Is this an opportunity for Vietnam to supply tuna to both countries? At present, China is the 5th largest tuna exporter to the United States. In 2017, USA purchased 23,500 tonnes of tuna products from China, worth US$ 127 million, up 16% in volume and 28% in value over the same period in 2016. In early September 2018, the US government has levied tax on more than 6,000 commodities importing from China. Among them are fresh and frozen tuna products, pushing tuna products on the trade dispute between the two countries.

China and Vietnam have changed place to take the lead in exporting tuna to the United States of America. Accounting for 70% total canned tuna import of the US; China has become the 2nd largest supplier of the US, making it a weighty competitor of Vietnam and Thailand. The import tax rate for fresh and frozen tuna of China in the US will increase sharply and creating favourable conditions for other countries in order to boost tuna export market. So, it will be a good opportunity for Vietnamese companies to promote export of commodities such as frozen tuna to the US market.