Electronics industry of Vietnamese economy is growing rapidly. The vast majority of the electronics industry in Vietnam is dominated by foreign companies. Foreign companies looking to invest in Vietnam can take advantage of many of the free trade agreements. Currently, domestic electronic enterprises are not adding to the supply chain since most materials are imported. Electronics include phones, hard disk, hard drives etc. Hard Drive is used to read from and write to a hard disk. It is a non-volatile memory hardware device that permanently stores and retrieves data on a computer. Vietnam import report of hard drive provides essential market intelligence for all sizes of the company.

According to Vietnam import data of hard drive, a total of 4964834 pieces with the value of USD 90.87 imported between January and June 2017. Let’s, go through the analytical report of Hard Drive which comes under electronics. This article describes the month wise analysis, brand wise analysis, top exporting countries of Vietnam etc.

Vietnam registered highest import value of USD 22.33 million in the month of May 2017 which is 24.57% of total hard drive imports. It shows a growth in imports from January to May and then declined in June 2017. In January, the country did lowest imports of hard drive and recorded value of USD 7.8 million i.e. 8.61% of total imports. 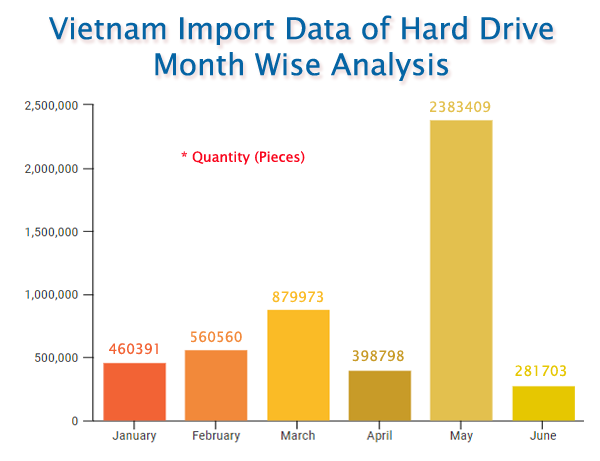 Seagate, Toshiba, Kingmax and HP are next in the list of most importing hard drives brands in Vietnam. Seagate brand recorded second highest value from imports i.e. USD 10.69 million while it stood on top in the terms of quantity. Vietnam has imported 2421908 pieces of Seagate hard drives during Jan-June 2017. The 550 GB hard drive of this brand has imported majorly which recorded 41% of total quantity with the value of USD 1.57 million. Also, the 4 TB hard drives of Seagate brand registered highest import value of USD 2.66 million from 82571 pieces of hard-drives.

Toshiba is the one of the most demanded brand in Vietnam as well as in Asian countries. Vietnam has imported hard drive with the value of USD 7.05 million while it imported 170283 pieces of hard drives during 1st half year of 2017. Go through the below table to check the most exported brands of hard drives in Vietnam. 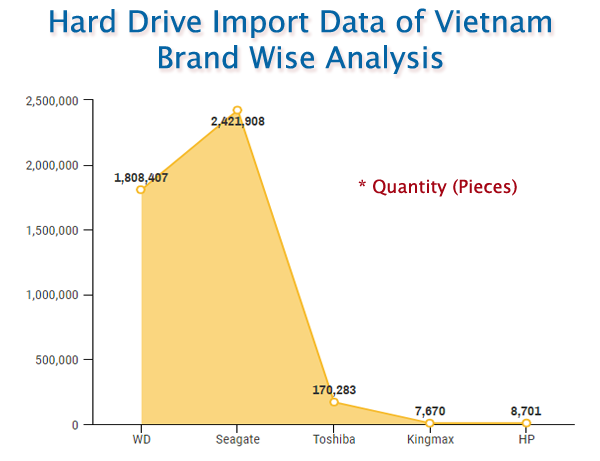 *Above stats are based on Jan-June 2017 report

There are nearly 500 hard drive importers in Vietnam. Greystones Data Systems Vietnam Ltd stood as largest importer in Vietnam which recorded 26% of the total’s value. Here is the list of Vietnam Importers of Hard Drive.

Are you looking for Vietnam buyers of electronic equipment like hard drive? In our Vietnam Import data of hard disk drive, you will find the list of active importers in Vietnam and also will know at what rates they are importing from foreign countries.

Vietnam is majorly importing hard drives from Hong Kong as it is the Vietnam’s top exporter country of hard drives. It recorded the value of USD 38.13 million from Hong Kong between January and June 2017. Thailand, United States, Singapore and Malaysia are next largest hard drive exporting countries of Vietnam. Vietnam did hard drive imports of USD 16.82 million from Thailand during Jan-June 2017. In terms of quantity, 277945 pieces of hard drives imported Thailand during the same period. Here is the table representing top hard drive exporting countries of Vietnam. 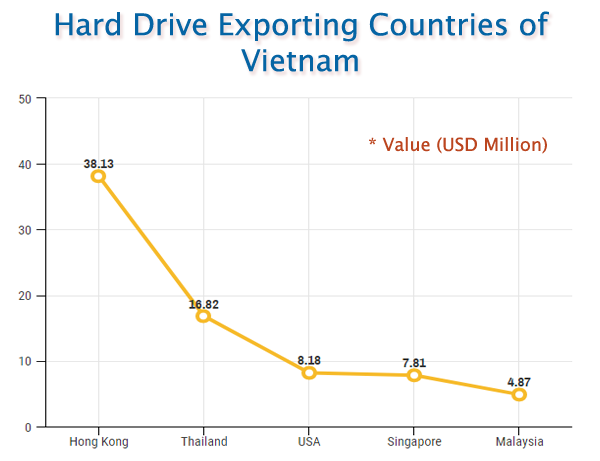 *Above stats are based on Jan-June 2017 report

Want to sell electronic equipment like hard drive in Vietnam? Well, it depends on the companies in Vietnam as who are the majorly importing these products. What will be the unit price of your product in Vietnam? Let’s check the sample of Vietnam import data of Hard Drive with the complete shipment details.

Subscribe to get Vietnam Import Data of Hard Drive

We have mentioned above the sample of our report from which you will get an idea about shipments. Here are the points that what you will gain from our Vietnam Import report of Hard Drive.

Subscribe our Vietnam Import report of hard drive and get the complete trade statistics which are analysed on the basis of brand, storage, exporting countries, importers etc.