The agriculture sector is large, diversified and heavily integrated with the United States, making it a best prospect industry for the U.S. companies in Mexico. The U.S. serves as the main exporter and supplier of soybeans to Mexico, after China. According to Export Genius US export data, the United States shipped soybeans to China (48%) and Mexico (7%) in 2020.

Soybean is a species of legume native to East Asia and widely grown for its edible bean. Traditional use of soybeans includes soy milk and fermented soy foods include fermented bean paste and soy sauce. Fat-free soybean meal is a significant and cheap source of protein for animal feeds and many packaged meals. Soybean contains significant amounts of B vitamins, dietary minerals and phytic acid.

Similar to many countries around the world, economically the United States and Mexico are grappling with the effects of the coronavirus (Covid-19) pandemic. However, America is positively fulfilling Mexico’s demand of soybean with marginal decline in soybean exports to Mexico in March & April months of 2021.

The United States’ second-most export destination of total goods and soybeans is Mexico. U.S. shipped goods worth USD 212.6 billion to Mexico in 2020, among which US soybean exports to Mexico valued USD 1,895 million. The year 2021 started on a promising note for the United States soybean industry as the country supplied soybeans to Mexico worth USD 238.7 million in January. Below given chart shows dollar amount of US soybean exports to Mexico recorded from Jan to May 2021. 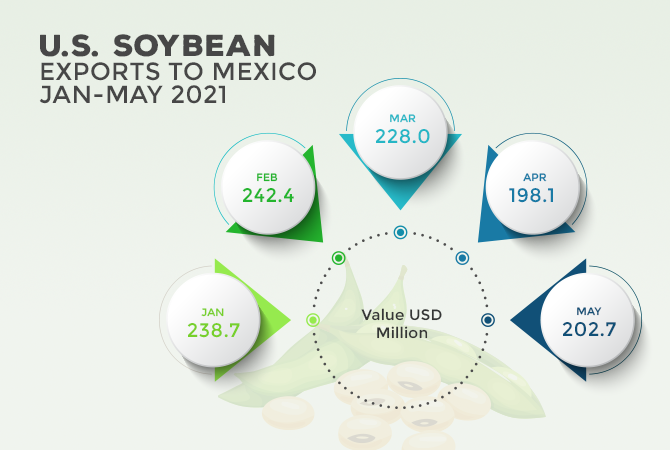 According to a report of U.S. Department of Agriculture (USDA), one bright spot for the U.S. soybean industry is higher soybean shipments to Mexico. About 96% of soybeans supplied for crushing in Mexico originate in the United States. Due to lower freight costs, the US is expected to maintain market dominance.

US Soybean Exports to Mexico by Year

Mexico is the United States’ second-largest agricultural partner and export destination of soybeans. Mexico shared 7.3% value to total US soybean export shipments in 2020. Soybean remains the primary oilseed imported into Mexico and is crushed domestically. Analyse export values of soybean shipments which depart from the United States to Mexico during 2017 to 2021. 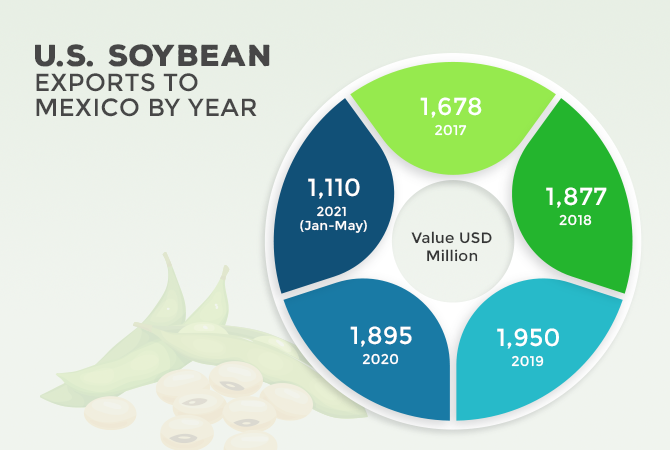 With expected higher prices but lower volumes and new variants of Covid-19, it is unclear whether 2021 can overtake last year’s record export value. Irrespective of this, 2021 is shaping up to be another stronger year in terms of growth for U.S. soybean exports.