The United States of America is the top importer of shrimps in the world. Shrimp, which comes under HS Code 030617, is purchased by the US mostly from India. As per Export Genius report on US shrimp imports, the country purchased shrimps at a value of USD 5183 million in 2017, which increased from the previous year. And from Jan-Apr 2018, US imported total 202729 metric tons of shrimps from the global countries. Let’s have a wider look at US import market of shrimps.

We provide extensive and accurate details on shrimp industry in the US with shipping information. Our shrimp import data of US covers wide-ranging fields including company information, HS Code, product description, port, value, quantity, etc. So, before you buy our data, just check shipment records of US import shrimps and find shrimp importers in USA right @ Search Live Data.

US Shrimp Imports during Jan-Apr 2018

The United States of America continued to build on its epic shrimp inventory in April 2018, as its imports of shrimp increased 13% in first four months of the year as compared to the last year. The country purchased total of 47,589 metric tons of shrimp during April, which represented a 4% increase over the same month in 2017. But that’s not the same pace of growth in US imports of shrimp that was kept during the first three months of the year. Let’s have a look at shrimp imports into the US during Jan, Feb, Mar and Apr 2018. 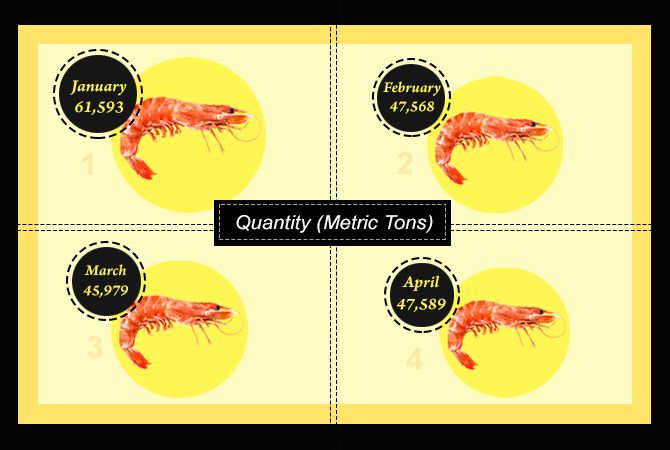 Imports of Shrimp into the US in Last 5 Years 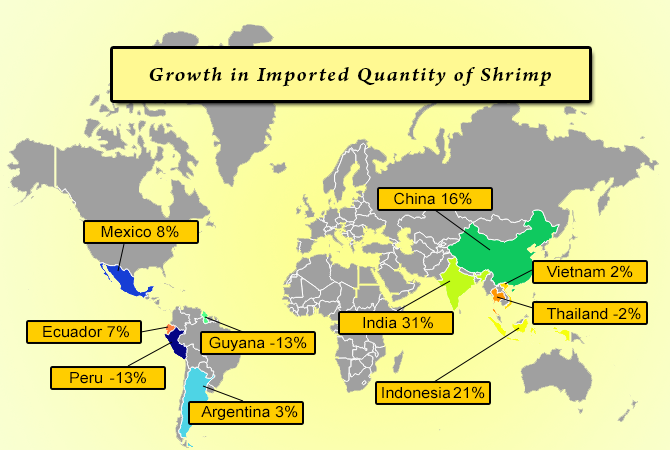 As per media reports, Indian shrimp industry leaders have suggested that if downward trend in shrimp prices continues for the next two months, a 20% drop in production could be expected this year. In India, prices of shrimp were at close to an all-time low for week 21, but increased in week 22 (May 28-Jun2, 2018). For 100 count shrimp, prices went from INR 165 per kilogram to INR 180 per kilogram, which increases of between INR 10-15 across all sizes.

Similar reports of pressure to reduce production have come from Vietnam, where Vietnam Association for Seafood Exporters and Producers has advised shrimp farmers to ease up. The prices for a kilogram of Vannamei shrimp in the first quarter of 2018 dropped by 10% compared to the same period last year. In April this year, shrimp prices dropped to VND 110,000-120,000 per 70-unit kilo by VND 20,000 per 70-unit kilo. Still, the United States purchased 3,708 metric tons of shrimp from Vietnam in April 2018, 13% more than that of 3,291 metric tons in April 2017. 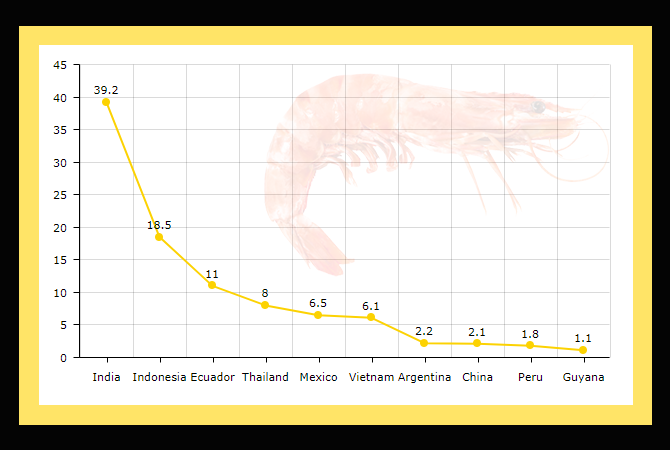 US Anti-Dumping Duty on Indian Shrimps

Indian shrimp exporter, Apex Frozen Foods Ltd. doesn’t see the preliminary anti-dumping on the seafood suggested by the US Department of Commerce impacting trade. The United States of America, which is the largest market of Indian seafood, has determined that a certain type of shrimps, particularly frozen warm-water shrimps have been sold at less than normal value, due to anti-dumping duties imposed by the US on Indian shrimps. In lieu of this, the Indian government has suggested an increase in rate of shrimp to 2.34% from earlier 0.84% finalised in September last year. According to the shrimp industry experts, this scenario would not lead to any major disruption in export volumes or impact margins of Indian shrimp processing companies.

According to Export Genius data, India’s shrimp exports to the US rose nearly 49% year-on-year. To meet the expected rise in demand of Indian shrimps in the US, Indian supplier of shrimp, Apex Frozen Foods Ltd. is supposed to increase its capacity by 20,000 million tons of shrimp per annum by the end of June 2018.

Among top shrimp importing countries, the United States is the net importer of shrimps and it majorly purchases shrimps from India. For complete report on US shrimp imports with wider coverage of data columns including shrimp buyers in USA, buy our data now.