US-Japan Bilateral Trade – US Major Imports from & Exports to Japan

Both in terms of imports and exports, the United States of America’s 4th largest buyer and supplier was Japan in 2017. According to Export Genius market research report, US total exports to Japan valued at $ 67695 million and US total imports from Japan valued at $ 139860 million in the said year. We keep a close eye on every shipment, which departs from US & to Japan or arrives into the US from Japan via sea, air or road. Our customs data of the US and Japan is covered with comprehensive data columns including importer & exporter name, HS Code, product description, value, quantity, port, etc. Let’s begin analysing US-Japan bilateral trade relations from the US import-export statistics and Japan import-export statistics recorded in the year 2017.

>> Search Live Data of US Trade with Japan

The tenor of US-Japan relations has been positive since US President Donald Trump came into office, no doubt aided by the concerted efforts of the Prime Minster Abe to build a good relationship with his American counterpart. But, trade is one area, which plays a crucial role in strengthening the bilateral relations between both the countries. Across Asia, there is a concern over the Trump administration’s trade policy towards the region. Trade war between the United States and China and US imposing tariffs on certain commodities are one of the major concerns that could have ripple effects on the trade across the region.

Now that Japan has emerged as a potential leader in maintaining the liberal economic order, it must carefully consider the future of trade relations and policies with the United States, not only for the viability of its own domestic economic strategy but for regional economic stability as well.

On 2nd May 2018, the Center for East Asia Policy Studies at Brookings hosted a panel of distinguished Japanese politicians for a discussion on the US-Japan bilateral trade relations and East Asian regional economic issues. The topics addressed in the meeting included US-Japan trade issues such as steel tariffs & prospects for bilateral trade negotiations, alternatives to the Belt and Road Initiative, rising trade tensions between US & China and Comprehensive and Progressive Trans-Pacific Partnership (CPTPP).

In April 2018, Japan has started talks with the US on a Free Trade Agreement that would benefit both the countries in terms of trade. This agreement will lead to Japan importing more agricultural goods and automobiles from the US. This deal could also force Japan to open its competitive and thoroughly protected agricultural sector to cheaper imports from the US. This could hinder inflation and mar Japan’s GDP growth prospects. This comes and concerns about disruptions in global trade ties, caused by the ongoing trade disputes between the world’s two biggest economies, China and the US. At the same time, Japan is putting stress on the US to re-join the Trans-Pacific Partnership (TTP) talks. The International Monetary Fund has welcomed the Japan’s move, which could more efficiently tackle the issue of trade imbalances than bilateral trade deals.

Japan is currently running a significant trade surplus with the Washington, particularly in automobiles, electronics and other technologies and industrial metals as well. Japan also is one of the world’s largest holders of the US government debt, which makes it exposed to possible negative developments within the American economy. Let’s have a look at trade between US and Japan in the last 5 years. 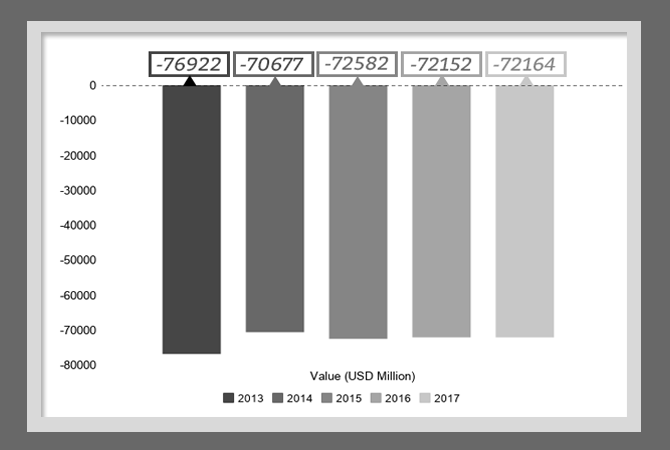 As per US export data, the country supplied machinery, mechanical appliances and other products of Chapter 84 the most to Japan in 2017. Here is a look at top 5 US exports to Japan with trade statistics at 2-digit level HS Code. 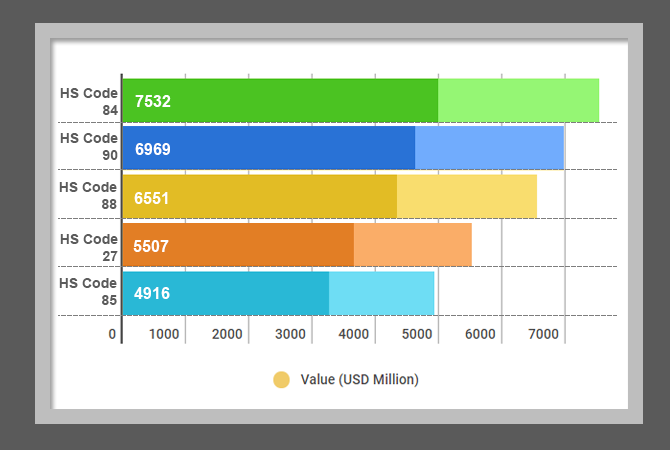 Major US Imports from Japan in 2017

Since 2013, the US imports from Japan have been declining and recording similar values. Except 2013 when total US import from Japan valued more than $140000; all year till 2017 recorded value in the range of $135000 and $139000. As per US import data, US purchased vehicles other than railway or tramway the most from Japan in 2017. Here is the list of top 5 products at 2-digit level HS Code that were imported by the US from Japan in the year 2017. 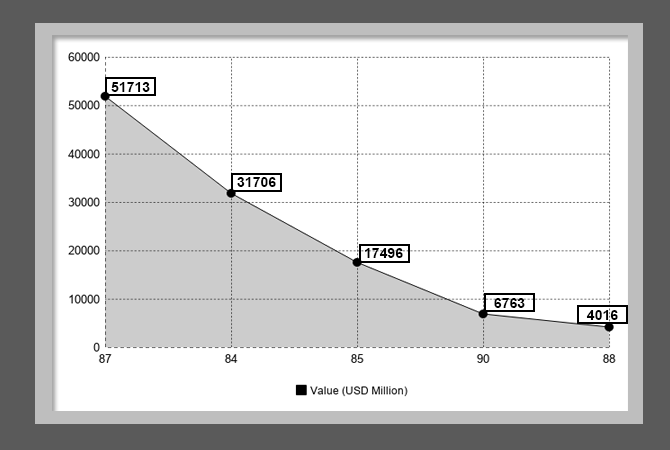 The decision of the US administration to impose tariffs on steel and aluminium would give a big impact on economic ties between Japan and the United States and global economy as well. Japan Foreign Minister Taro Kono said that Japan would respond appropriately upon examining any impact on Japanese companies and rules of the World Trade Organization (WTO). Recently, US President Donald Trump imposed 25% tariffs on steel imports and 10% tariffs on aluminium imports. With this, Japan is asking US administration to exempt it from plan of imposing tariffs on steel and aluminium.

So, if you want to do import-export business in US or Japan, have a deep study of the market with the help of our customs data that is based on accurate shipping details. Look at the sample of US export in which foreign country is Japan, below to know the data columns.

Let’s wait and watch how US-Japan bilateral trade will be in coming years, after the United States is imposing tariffs on certain goods and continuation of US-China trade war.