The United States is exporting huge amounts of crude oil to the European countries amid rising oil demand following Russia’s invasion of Ukraine and subsequent sanctions against Moscow. According to our database, the U.S. shipped US$69.3 billion worth of crude oil to the world in 2021, in which oil shipments valued at US$25.2 billion were delivered to Europe. It is anticipated that U.S. oil may find even more buyers in the coming years, but that could test the capabilities of US export infrastructure.

U.S. Crude Oil Exports to the World and Europe in 2022

According to the U.S. Energy Information Administration, the United States, on average exports 3.7 million barrels per day of crude oil. That was the highest since March 2020. From Jan to May 2022, the US shipped crude oil worth US$43,827 million to the world and US$19,169 million to the European countries. Here’s a chart showing U.S. crude oil exports to the world and Europe by the month of 2022. 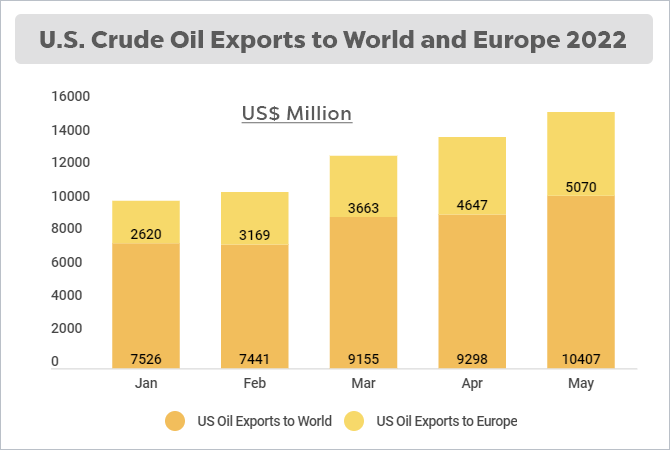 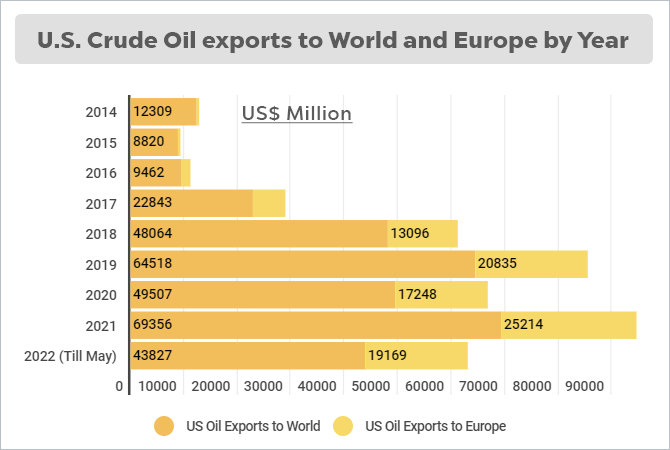 Top U.S. Ports from where Oil is Exported

The U.S. exports crude oil mostly from the Gulf Coast from ports including Corpus Christi, Houston, and Beaumont, all in Texas. Corpus Christi is the largest port, exporting about 2 million bpd of oil, followed by Houston at around 700,000 bpd. Here is a list of top U.S. ports from where crude oil is exported to the world.

According to industry analysts, the U.S. Gulf could export roughly 5 million bpd of crude, any more than that would cause substantial congestion in shipping channels. So, more ports are required to handle increasing shipments of oil. It is anticipated that Gulf coast exports could surpass 4 million bpd in mid-2023 and reach 4.8 million bpd by late 2024.

The United States of America sends the majority of its crude oil – about 1.4 million bpd to Europe, around 1 million bpd to Asia, 250,000 bpd to Canada, and other barrels to Latin America.

India stood as the largest importer of America’s crude oil in 2021, with a market share of 13.7%, followed by South Korea, Canada, the Netherlands, China, the United Kingdom, Taipei, Chinese, Singapore, Italy, and France. Below given chart and table shows values in percentage and dollar as well of these countries. 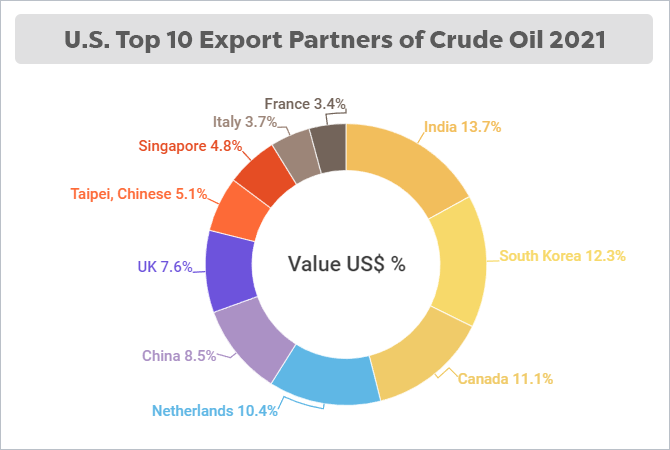 Besides export, the U.S. is also a net importer of crude oil, imported oil worth US$138,383 million in 2021. The United States needs to enhance its shipping infrastructure and build more ports to handle crude oil export shipments as the country is expected to increase its oil production.