The United States of America is set to become the world’s biggest liquified natural gas (LNG) exporter in 2022, surpassing Qatar and Australia, and may hold that title for years to come. According to our US export data, the United States recorded a new high in exports of LNG and reached to US$ 17,524 million (stats till Q3) in 2021. US In this edition, we take a close look at the surge in U.S amid a global energy crisis, and US export statistics of LNG by quarter, year, and foreign country.

US LNG Exports by Quarter

The United States of America saw a record surge in exports of LNG in 2021. Till Sept month, U.S. exported liquified natural gas worth US$ 17,524 million. The second and third quarter of 2020 recorded a major decline in LNG exports due to Covid-19 pandemic and global supply chain restrictions. The recovery, however reported in fourth quarter of 2020. Thereafter, the United States has been recording a good increase in exports of liquefied natural gas. 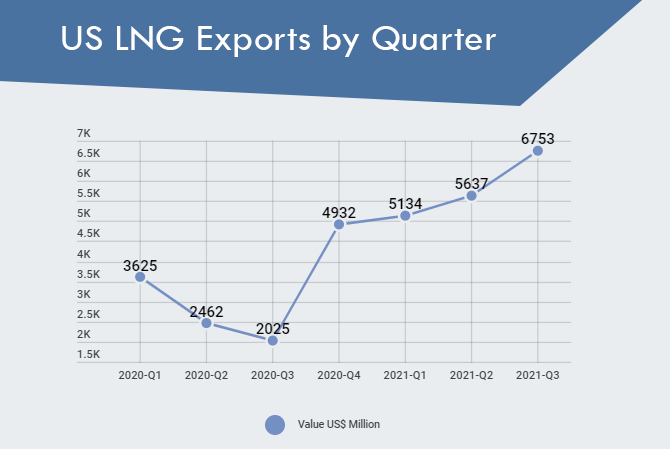 US LNG Exports by Year

Global LNG demand has hit record highs each year since 2016, due mostly to surging demand in China and the rest of Asia. Much of that global appetite has been met by steadily rising U.S. LNG exports, which have reached new records ever since 2016 and is poised to continue in 2022. 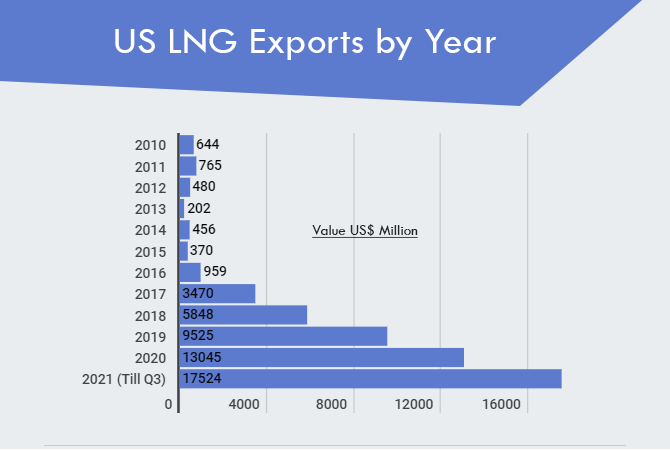 US LNG Exports by Country

In 2021, most of U.S. LNG exports went to Asia with about 13% going to China & South Korea each, 10% to Japan, and 7% to Spain. Till Sept 2021 data, China, South Korea and Brazil recorded an increase in the value of LNG shipments which arrived from the United States. Other countries recorded a rise were India, Spain, Chile, Argentina, and Netherlands. Japan and Turkey saw a decline in the value of LNG consignments arrived from the U.S. Analyze US LNG exports by country with statistics reported in Q1, Q2 & Q3 of 2021. 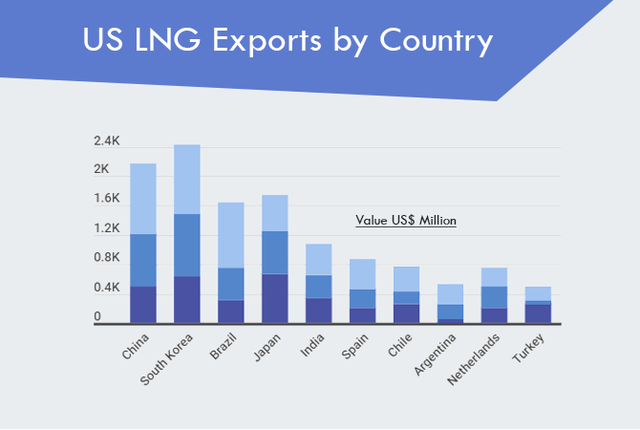 US export capacity should continue to grow in the coming years, and could peak to 13.9 billion cubic feet per day by the end of 2022. But rival producers are also building new infrastructure, with Qatar planning to boost its LNG capacity to 126 million tonnes per year. That would allow Qatar to reclaim the title of top exporter from the United States later this decade. Get updated data of US LNG export market right here.