US Almonds Export – India Remains the Top Foreign Market in 2021

The United States of America is the world’s largest exporter of almonds, with a market share of 60% recorded in 2020. As California almond growers consistently produce yields at record or near record levels year after year; India continues to be the top foreign market of US almonds export in 2021. According to Export Genius, US shipped almonds worth USD 267 million to India in first six months of 2021. Visualize US almonds export, global shipments and trends.

US Exports Almonds to India

According to the latest US export data and market research report, the United States continued to export almonds mostly to India in 2021. In first six months of 2021, the highest value of almond export shipments from US to India recorded in January, which declined in later months of the year. Visualize market trends of US exports almond to India from Jan-Jun 2021. 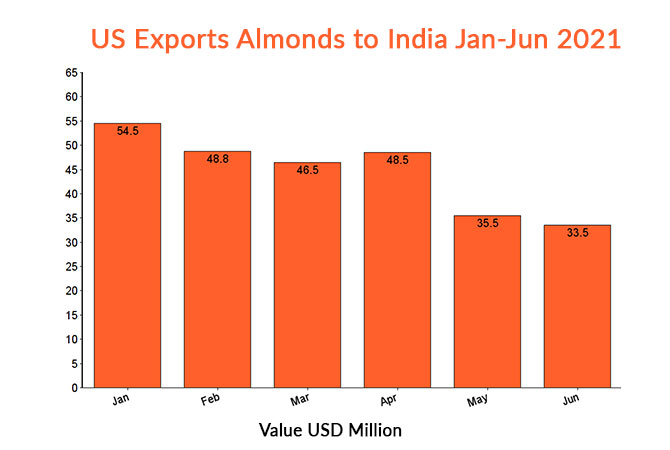 US Almonds Export to India by Year

India (218K tonnes) is the top destination for almond exports from the U.S. accounting for 74.4% share of total exports in 2020. Below given chart shows dollar amount of US almond exports to India recorded from 2012 to first six months of 2021. 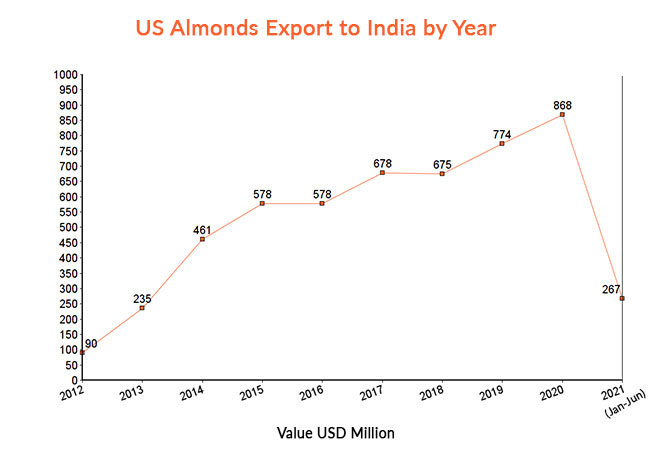 In the past year, the Covid-19 pandemic has presented a temporary challenge in moving shipments of almonds and other nuts from the United States to export markets including India. Still, the Almond Board of California (ABC) continues to strongly support the California almond industry through key marketing initiatives, education and negotiation with international trade officials and frequent discussions with regulators in the United States and abroad.

Region-wise Analysis of US Exports Almonds 2020

The US export data of almonds show the United States shipped almonds the most to countries in the Western Europe, followed by Asia-Pacific, Middle East/Africa, Canada/Mexico, Central/Eastern Europe and Latin America. See percentage share of these regions reported in 2020.

India remains the number one export market for U.S. almonds. Historically, India and China have been the primary destination for US almonds, but given the recent trade situation with China, India has absorbed much of those shipments. Get complete report on US export almonds to India with latest statistics. To get a free data sample, request a demo. Or contact us and speak to our sales representatives.