Ukraine’s 2022 trade with the United States was off to a record start but the Russian invasion of Ukraine which began in Feb 2022 will certainly upend that trend because of Ukraine’s destroyed infrastructure and affected supply chain of goods. In the month of January, the only 2022 data currently available, Ukraine recorded its highest monthly total in at least two years at US$444.39 million. In fact, for the last five months, Ukraine’s trade with the US topped US$400 million, the only month it has done so in the last two years.

Ukraine’s trade with the U.S. by Year

The trade balance between Ukraine and the United States stood at US$540 million in 2021. Ukraine’s imports from the U.S. totaled US$2,528 million, while Ukraine’s exports to the US totaled US$1,988 million in that year. Here’s a quick overview of Ukraine-U.S. bilateral trade in the last ten years. 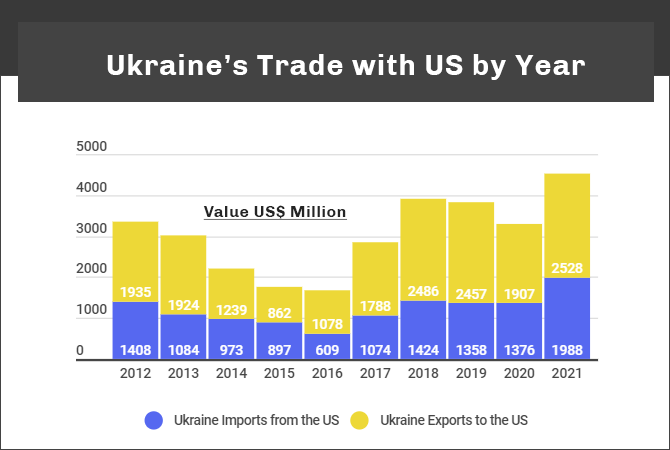 Ukraine’s trade with the U.S. by commodity

Ukraine is one of the largest exporters of corn, wheat, soybeans, sunflower oil, and iron ore. And the United States is not particularly dependent on Ukraine for those exports, meaning the impact, as least directly, is not as significant as it might be for other countries, including European ones. This does not suggest that the Russia-Ukraine war is of no concern to the United States.

The United States is largely not dependent on Ukraine for goods, however, it imports Ukrainian soybeans, sunflower oil, and other agricultural products. Ukraine actually imports goods from the United States to meet its demand. Here is a list of commodities that Ukraine import from the US and export to the US with dollar amounts reported in 2021. 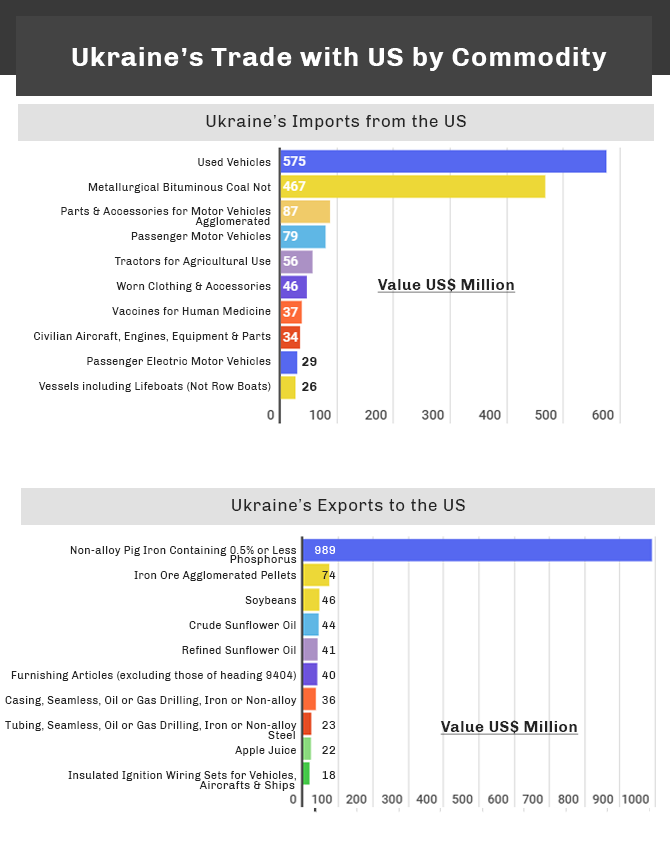 According to the International Monetary Fund (IMF), Ukraine’s war-ravaged economy could shrink by up to 35% in 2022. And many countries that are dependent on Russian and Ukrainian goods have to look for alternatives to meet the demand.

The trade between Ukraine and the United States had been growing steadily and it has been becoming a more significant trade partner. After reporting positive business growth, it is expected that Ukraine-U.S. trade will be upended by Russia’s invasion of Ukraine. The flow of goods through Ukrainian territory is almost halted as there is no movement of shipments from the Black Sea, which is the major sea transport of goods. Many countries have put sanctions on Russia for this invasion, leading to global supply chain disruption.