The bilateral trade between Turkey and India in 2019 was US$ 7.56 billion, in which imports recorded the highest value of US$ 6.5 billion. And exports from Turkey to India totalled US$ 1.06 billion. Turkey is a country in the Middle-East, while India lies in Asia. Both countries have acknowledged a positive growth in their bilateral trade. Despite India’s plans to cut imports from Turkey due to criticism over Kashmir policy, they have set a new target of $10 billion trade in 2020. Let’s have a larger picture of Turkey-India trade 2019 on the basis of total value, top import commodities, top export commodities and trading partners.

Turkey and India are likely to expand their trade with two-way investment policy. Turkey trade data shows both G-20 countries grew their bilateral trade by 22%, reaching $8.6 billion in 2018. They have planned to accomplish target of $10 billion Turkey India trade by 2020 and set a more ambitious target for 2025. Indian market provides great opportunities to Turkish investors.

According to the Turkish Union of Chambers and Commodity Exchanges (TOBB), Turkey has focused on Western markets to expand their trade and in recent times, it began investing into Asian markets, especially Indian businesses. Besides having its own market in Central Asia, Europe and Black Sea Region, Turkey has capacity to cover wide geography, especially the Middle East for imports and exports. Check statistics on India Turkey trade 2019.

Turkey’s exports to India totalled US$ 1.06 billion in 2019. According to Turkey export data, the country shipped machinery commodities at 2-digit level HS Code the most to India. Here is the list of major export commodities of Turkey to India with their values. 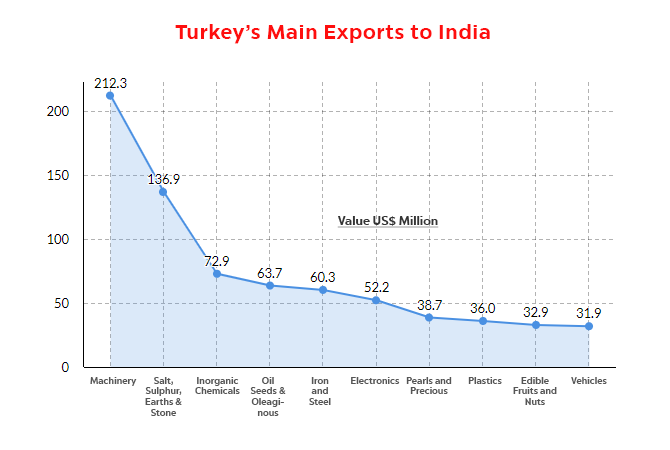 Turkey’s imports from India valued US$ 6.5 billion in 2019. The purchases of mineral fuels and oils from India recorded the highest value. According to Turkey import data, the country imported mineral fuels, oils and petroleum products worth US$ 1954.8 million in the said year. Check other products at 2 digit level HS Code which are imported by Turkey from India with India Turkey trade statistics. 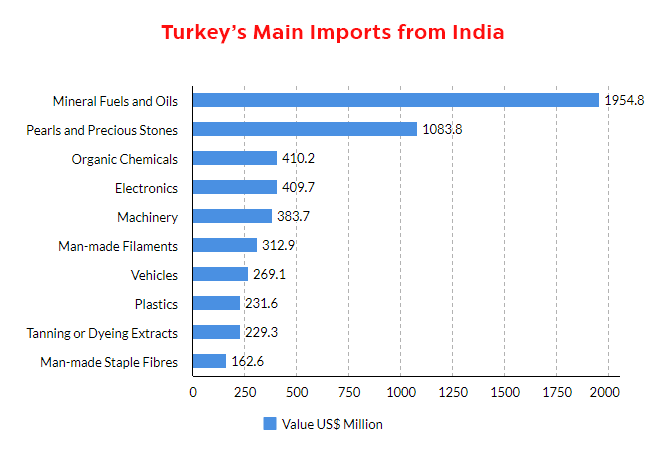 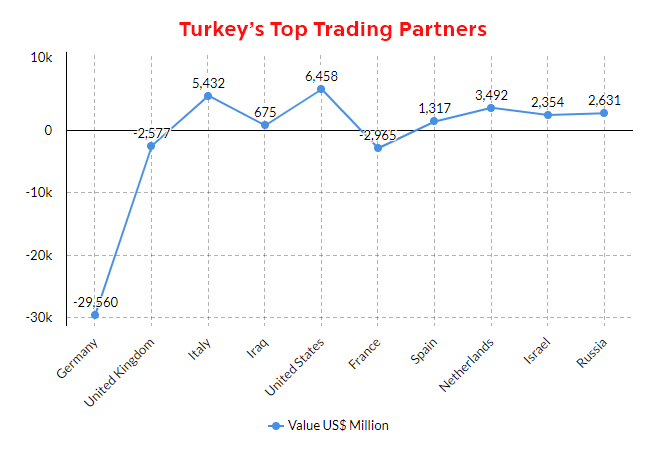 Top investors in Turkey firmly believe that year 2020 will see positive trends for the Turkish economy. According to the International Investors Association (YASED), investors saw a difficult period due to unforeseen developments including trade wars, but the year 2020 will be more predictable and positive for investments globally.

Business analysts in Turkey have forecasted a decline in foreign direct investments (FDI) in 2019 from $13 billion in 2018. The official figures of 2019 have yet to be announced.

Though India is planning to cut imports from Turkey due to criticism of India’s Kashmir policy; both the countries are still hopeful to have a positive bilateral trade growth in 2020. If this happens, imports of oil and steel products from Turkey are likely to hit.

Trade relations between India and Turkey are likely to get boosted with fresh hopes to make goods investments in year 2020.