India is the largest beef exporter in the world followed by Brazil and Australia. It has registered export value of 3680 million USD by beef exports from world’s output (19886 million USD) in 2016.  India has generated 931 million USD from its Meat Export Market during the first quarter of year 2017. It has maintained constant sales in this period with revenue value of 31.64%, 35.27% and 33.09% in January, February and March respectively. Meat has been exported majorly by India under HS code 02023000 with a quantity of 93.29%. The biggest market for beef industry of India, at 488 Million USD, is Vietnam in 2017 as per our report till 31st March. Allanasons Private Limited is the No. 1 beef exporter in India. It has exported 31.29% quantity out of total beef exports from India.

According to meat export policy in India, the export of beef with bone is prohibited. Bone in other meat is also prohibited and not permitted to be exported. Only the boneless meat of buffalo, meat of goat and sheep is permitted for export.

The buffalo meat is exported by India is mostly raw, de-boned chunks which are used primarily in the processed. Very little people make it to kitchens for direct consumption by individuals. This is because carabeef is tougher. You will know the complete details of meat exporters in India and can analyse the terms related to beef export business after reading this article. You will also get answer of these questions in this article.

1.     Which is the top beef Exporter Company in India?

2.     Where are the major markets of Beef export industry across the world?

3.     Which is the top exporter city of beef industry in India?

4.     How much revenue is generated by Meat exporters in India during January to March 2017?

There are approximately 150 beef exporters in India. India exports beef to as many as 50 countries including Vietnam, Malaysia, Iraq, Algeria, as per our data and report of beef export. India is exporting Buffalo Meat with a value of 891.9 USD Million across the world. A raise in the beef business is due to various factors. One of the main reasons is Ramzan season which will increase the demand to a great extent. Allanasons Pvt. Ltd. is the largest beef exporter of India followed by Al-hamd Food Products Pvt Ltd and Mirha Exports Pvt Ltd. However, In March 2017, Mirha Exports has beaten Al-hamd as per the beef export report. Here, we are providing the details of India largest exporter of beef from the report of Export Genius (January to March 2017) in the table below. 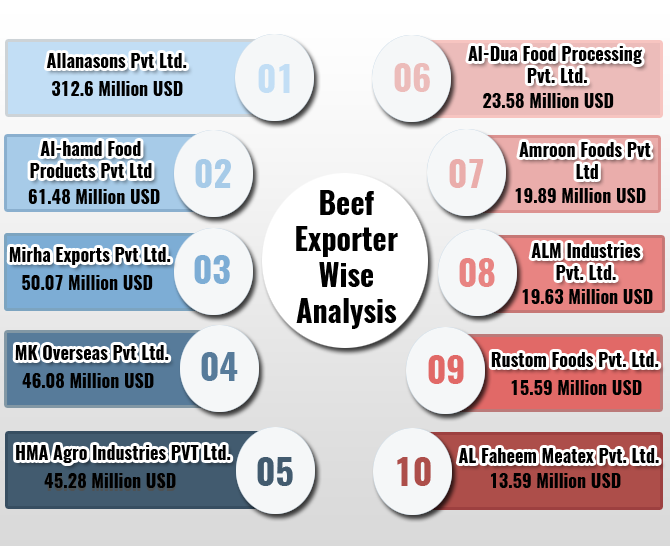 India exports beef to more than 50 countries across the world. Vietnam is the biggest market for Beef exporters in India. The country is exporting different category of meat like boneless and carcasses around the globe. Vietnam is importing around 52.17% of total quantity supplies by beef exporters of India. Malaysia stood second in the list with a quantity of 9.92% followed by Iraq and Algeria. If we talk about market share of countries then United Arab Emirates comes earlier than Iraq and Algeria. The countries like Turkey and Nepal which are bottom in the list report of importers of India. You can refer the below table and graphical representation to check the major markets of beef exporters of India. 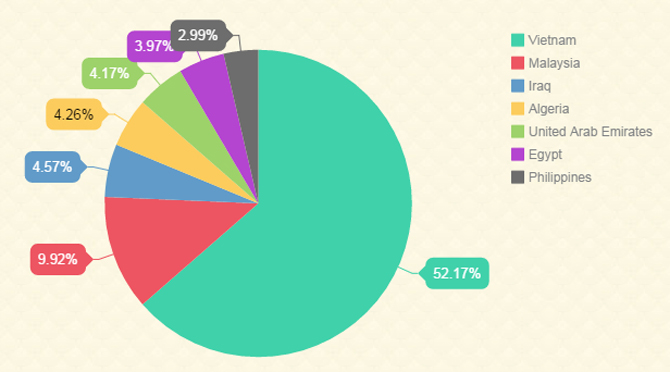 Mumbai is the top exporter city of beef in India followed by New Delhi. A total value of 398.2 Million USD (39.94%) has generated from Mumbai city. These two cities are main markets for beef exporters as they are generating approximately 66% of the revenue of beef industry. Buffalo meat is mainly exporting from these cities with a quantity of 38.75% (Mumbai) and 24.36% (New Delhi) respectively. India is running their beef export business with the help of 29 cities across the country. The cities like Aligarh, Ghaziabad, Agra, and Meerut are next in the chart. Check the following table to know the city-wise top beef exporters in India. 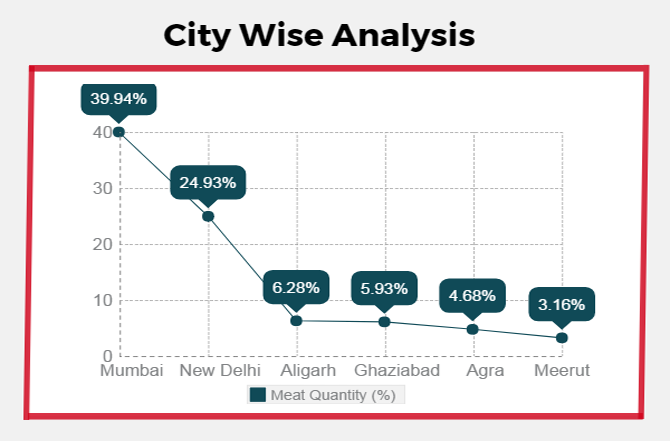 All the beef exporters in India are running their business from 17 various India ports. They mainly used JNPT port for exporting of beef in various countries. JNPT, Mumbai is the main port for Beef export business in India with individual’s revenue value of 40.48% through Indian ports. JNPT is followed by Albratos CFS and Loni ICD with the revenue value of 16.96% and 11.02% respectively. You can go through the following table to check port wise analysis on the basis of beef exporters in India. 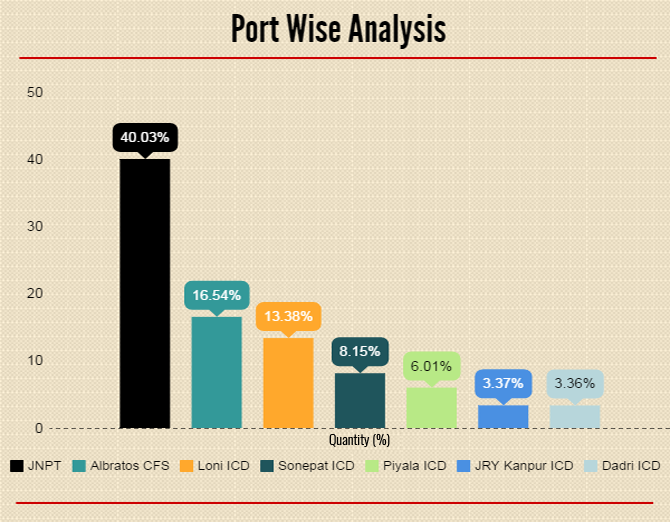 As we mentioned above, Allanasons Private Limited is No. 1 beef exporter in India. The company is exporting beef to more than 280 foreign companies with a quantity of 31.29% across the world. It has generated a total value of 312 Million USD during January to March 2017. The company is exporting from six Indian ports i.e. JNPT, Piyala ICD, Sonepat ICD, JRY Kanpur ICD, Delhi Air and Sahar Air Cargo, and generated 312.66 Million USD from these ports.

Al-Hamd Agro Food Products stood second in the list with a quantity of 6.28%. However, Al-hamd Agro is exporting to around 58 companies across the globe. The company has generated a value of 61 Million USD in the first quarter of year 2017. It has generated 61.4 Million USD from January to March 2017 and exporting from two Indian ports which are Albratos CFS and CMA CGM Logistics Park.