The arms industry is responsible for the manufacturing and sales of weapons and military technology. It is also known as the defense industry or arms trade. Many industrialised countries have a domestic arms industry to supply their own military forces. Some countries also have illegal domestic trade in weapons for use by its citizens or primarily for self defense. USA, Russia, United Kingdom, Italy, Israel and Germany are largest arms exporters in the world. As per the trade map, the top 10 countries are responsible for the majority of all major arms exports and accounting for around 90% of global sales. The global trade of heavy weapons systems has now reached its highest level. Here, we take a comprehensive look at the top arms exporting countries across the world. In this article, you will also get the details like in which countries they are exporting, what is the total export value and which arms product has exported most.

Bombs, grenades and other ammunition are the most exported product under HS code 9306 while swords, cutlasses, bayonets, lances and similar arms are the least exported item of arms product which come under 9307. However, 7 types of products are traded in the category of arms, ammunition and its parts, which are given below.

and projectiles, under HS code 9306

·         Firearms and similar devices which operate by the firing of an explosive charge,

·         Spring, air or gas guns and pistols, truncheons and other non-firearms,

United States of America stood as largest arms exporter country in the world. USA did export sales of USD 5446051000 from arms and ammunition during the year 2016. The share value of USA is 37.8% in world’s arms exports. United Arab Emirates, Taipei, Saudi Arabia, Korea and Japan are its top arms importing countries. UAE represent 16% of USA’s arms exports while it is 11.9% for Taipei. Arms exports to Saudi Arabia accounting for 11% USA’s arms exports. If we look at product wise analysis, USA has exported most the arms product under HS code 9306 with the value of USD 4311100000. This product includes Bombs, grenades, torpedos, mines, missiles, cartridges and other ammunition and projectiles. Refer the below table to check the top arms exporters (Country) with their share value in world arms export market. 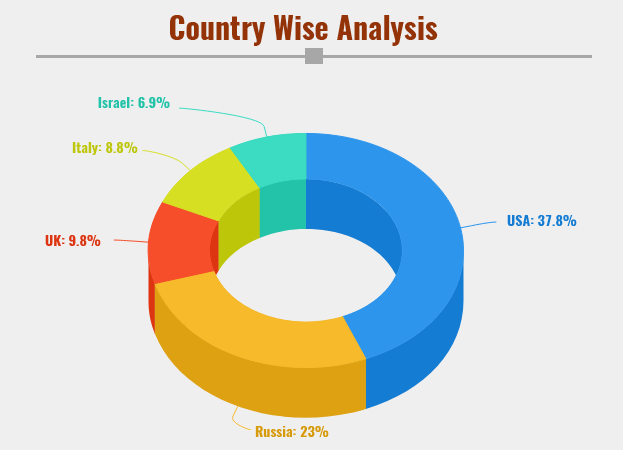 USA is followed by Russia in the arms exports. Russian Federation is second in the list of largest arms exporters across the world. Its share in world arms exports accounting for 23% during 2016. Algeria, Azerbaijan, Korea, Tajikistan and Uzbekistan are its arms importers. Russia recorded value of USD 1511839000 from arms exports in 2015 while it was USD 4451765000 during 2013.

United Kingdom did sales of USD 1413461000 from arms exports in 2016 which represent 9.8% worldwide. There are around 50 arms importing countries of United Kingdom while Saudi Arabia, USA, France, Germany are its top arms importers. UK is mostly exporting Bombs, Grenades, mines, missiles under HS code 9306 in various countries. In arms exports, United Kingdom and next countries are far away than USA and Russia in last years.

Italy arms exports represent 8.8% of world arms exports. It recorded USD 1270235000 value from arms exports during the year 2016. It is exporting arms and ammunitions in more than 80 countries across the world while USA, France, Germany are its top arms importers. Firearms are the most exported arms items by Italy which come under HS code 9303 and it also includes similar devices which operate by the firing of an explosive charge.

Israel stood as 5th largest country in the list of arms exporters. It recorded value of USD 992847000 from arms exports in 2016. Israel arms exports accounting for 6.9% of global sales of arms and ammunition. In arms exports, Israel is followed by Germany, Korea, Turkey and Brazil.

We at Export Genius will provide you the updated trade data of arms exports and also the names of top arms exporters in the world. Here, we are providing some arms exporters of Russia.