Top 10 Trading Partners of the Philippines 2017

Philippines is one of Asia’s fastest growing economies. It is a densely populated island having more than 100 million residents located in south-east Asia. Philippines exports stood at USD 63.23 billion and imports stood at USD 98.48 billion in the year 2017. China, Japan and United States are the largest trading partners of Philippines. The country is also a member of various trade organizations such as APEC, ASEAN, WTO, EAS, AFTA and others. Philippines has 34th largest nominal GDP in the world and 29th largest purchasing power parity GDP. The country had a negative trade balance in net imports since decades. In this article, we are providing Philippines export partners and Philippines import partners and their trade figures recorded during 2017.

Philippines is exporting goods to more than 180 countries of the world. Japan, United States, Hong Kong and China are the largest export partners of the Philippines. Philippines exports of goods to the world worth USD 63233 billion during the year 2017 while it recorded USD 56312 million in 2016. However, the country has maintained its export market and recorded 2% of growth in terms of value since 2012.

Japan is the largest Philippines export partner. Philippines exports of goods to Japan worth USD 10229 million during 2017. Wood carpentry, electronic integrated circuits and insulated cable wires are the top commodities exported majorly to Japan from the Philippines.

Philippines exports to USA stood at USD 9209 million in the year and it recorded USD 8670 million and USD 8811 million during the year 2016 and 2015 respectively. The country majorly exports automatic data processing machines and electronic integrated circuits to Japan. Cable wire, coconut copra and electrical transformers are the other leading exports to Japan. Here is the table representing trade figures of top 10 Philippines export partners. 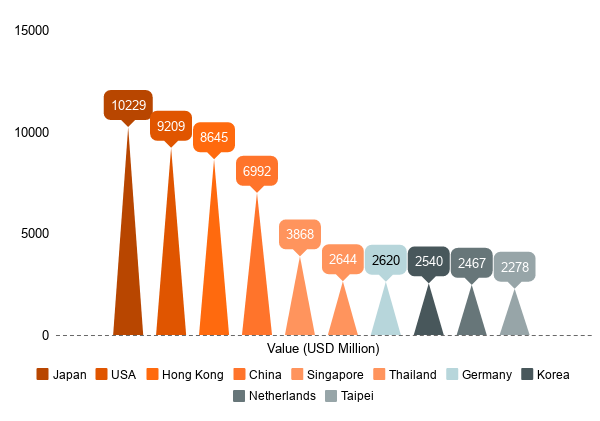 Philippines is importing goods from more than 150 countries of the world. China, Japan, Korea and United States are the Philippines top import partners. Philippines imports of goods from the world worth USD 98484 million in 2017 while it recorded USD 85908 million in the year 2016. The country export is increased by 6% of value between 2012 and 2016. 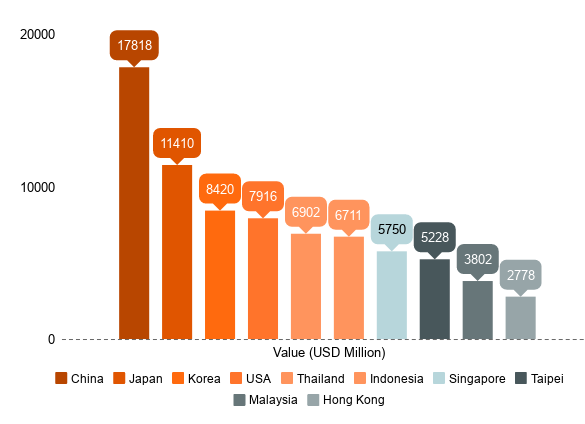 Are you looking for buyers or suppliers of your product in the Philippines? You can easily reach your business at a new height by getting the list of right business partner for your product. We at Export Genius providing the Import Export Data including the list of importers and exporters and shipment details. Here is the sample of Philippines import data including the major data fields that we cover in our trade report.

Besides Philippines, we also provide the trade data of more than 60 countries of the world.