Crude oil is a non-renewable resource which is usually found in reservoirs. It exists as a liquid and yellowish black in colour. It is a mixture of hydrocarbons and organic compounds. Petroleum is a broad category which includes petroleum products and crude oil that are made up of refined crude oil. Petroleum products are produced from the processing of crude oil and other liquids at petroleum refineries. These products are also produced from the extraction of liquid hydrocarbons at natural gas processing plants. Sometimes, petroleum and crude oil are used to mean the same thing and used interchangeably.

Check the following table to know the top 10 importer countries of petroleum crude oil with their import value. The trade statistics mentioned in the table below are based on trade map. 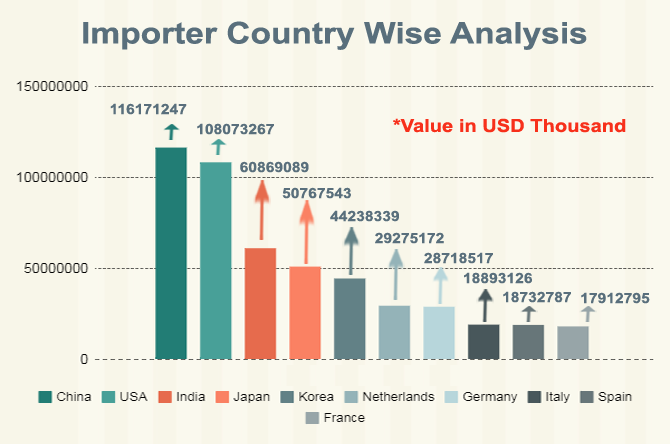 *above stats are based on the records of year 2016

United States of America got second rank in the list of petroleum crude oil imports with the import value of USD 108073267 thousand. It is importing crude petroleum oil from around 40 countries, majorly importing from Canada and Saudi Arabia.

India is The Third Largest Importer Country :- India is the third largest country in petroleum crude oil imports with the value of USD 60869089 thousand in 2016. India is importing crude oil from more than 40 countries across the world. It is mainly importing from Saudi Arabia followed by Iraq and Iran. India has imported petroleum crude oil from Saudi Arabia with a value of USD 12111032 thousand during the year 2016.

If we check by quantity exported in tonnes, Saudi Arabia has exported approximately 382196500 tonnes of petroleum crude oil in various countries across the world while it is 254367300 tonnes for Russian Federation. Refer the below table to check the top 10 crude petroleum oil exporter countries across the world. The export value given in this table is collected from Trade Map Data. 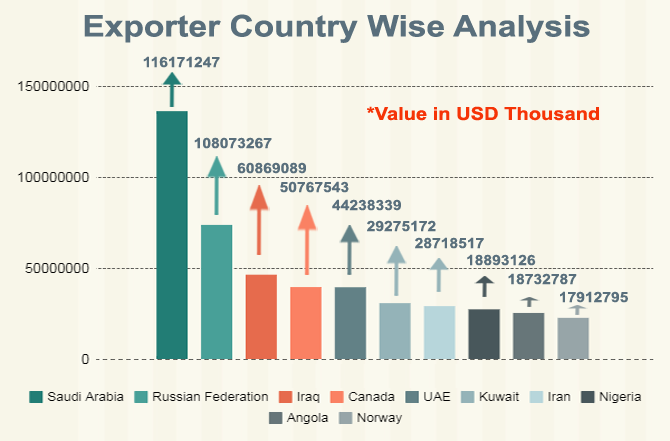 *above stats are based on the records of year 2016

The global promotion council helps the particular country in the development and promotion of export or import trade. The trade associations participate in public relations activities such as advertising, producing conferences and networking. Here, we are providing the name of promotion council and association at International level.

WPC is a non-political organisation with charitable status in the United Kingdom and has accreditation as a NGO from the United Nations. The purpose of the WPC are promotion of the sustainable supply and efficient use oil, gas, petroleum and other energy resources. There are around 65 member countries of World Petroleum Council including Argentina, USA, Vietnam, UAE, UK, India, China, Canada, Germany, Brazil etc.

OPEC is the largest association for petroleum products traders in the world. It is to coordinate and unify the petroleum policies of its member countries and ensure the stabilization of oil markets, in order to secure an efficient, economic and regular supply of petroleum to consumers, a steady income to producers, and a fair return on capital for those investing in the petroleum industry.

IPIECA is a not for profit association involving both upstream and downstream oil, petroleum and gas industry. This association promotes knowledge to help the industry and improve its environmental and social performance. It is also the channel of communication with the United Nations.

How to get Petroleum Crude Oil Data?

If you are seeking for petroleum crude oil data, subscribe our (export Genius) report to track the importers and exporters of petroleum crude oil of a particular country. Our report is based on actual shipments records and it is collected from the country’s customs. You can get trade data and statistical data. You can access the analysis report as per your requirements which will be available for particular duration and country.

After subscribing you will know at what rates it is exporting or importing in different countries.