Exports of Tomatoes from Middle East in 2019 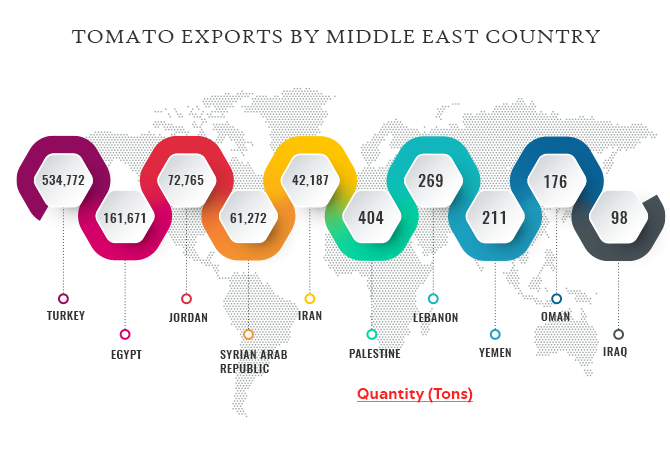 In value terms also, Turkey was the largest export country of tomatoes, which shipped tomatoes worth USD 303 million in 2019. As per Turkey export statistics of tomato, Turkey shared 63% of total value of tomato exports in the Middle East. Turkey was followed by Egypt, Iran, Jordan, Syrian Arab Republic, Israel, Lebanon, Palestine, Oman and Yemen. Below given chart and table shows dollar amount of top 10 export countries of tomatoes in Middle East. 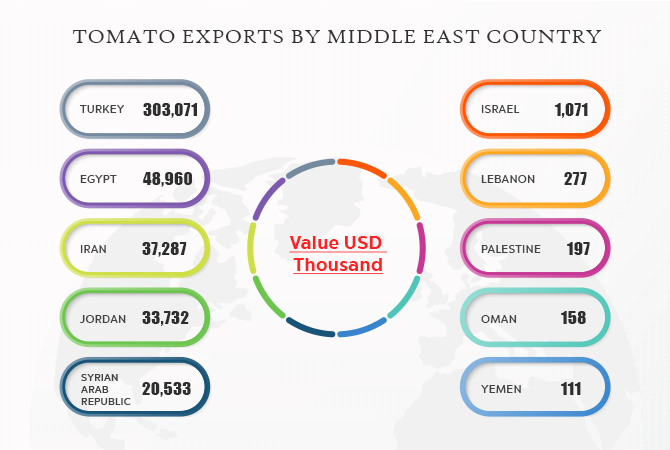 The Middle Eastern tomato market declined to USD 15.9 billion in 2019, which is down by -13.6% against the previous year. Tomato consumption in the Middle East totaled USD 19.8 billion in the said year. The countries with the highest volumes of tomato consumption were Turkey (12M tonnes), Iran (6.7M tonnes) and the Syrian Arab Republic (651K tonnes), together accounted for 86% of total consumption. These countries were followed by Jordan, Saudi Arabia and Israel, which together accounted for a further 6.6%.

Middle East is a transcontinental region that generally incudes some countries of the Western Asia. It is a crucial region when it comes to global economy. Like tomatoes, many other commodities petroleum oil, liquefied natural gas, pearls & precious stones and many other goods are exported by countries in the Middle East. Get global trade data with shipment details of any country and any product right here.