Taking A Look Back At Russia's Trade With Other Countries

Russia is geographically the biggest region, but so has the potential of capturing a big market share in the international market with its rich volume of exports worldwide. It is also one of the major trading partners with other countries for its high exports of crude oil ($211.5 billion, 2021), followed by other high exported items such as iron and steel.

It has been more than a month since Russian invasion of Ukraine commenced, dating back to 24 February 2022. On March 2, 2022 UN vote concluded the decision on withdrawal of Russian troops and further from this trial, the reflection on other countries who are reliant or dependent on Russia occurred as a few either decline the vote or were not present. Which countries are reliant on Russian exports, and what are the alternatives?

Russia is usually on the scale of 15th to 18th position in world’s largest economy, with the current position of Russia being at 16th with a total worth of exports of $491.5 billion for 2021. While this might be not an accurate representation of the ranking of Russia or any other country due to the limitation in reporting countries and hence, the import-export records, but Russia is often found around the ranking of 14 or 15 among the world’s largest economies.

The major production of the Russian Federation is in oil and gas exploration. Pearls, precious stones & metals and mining are also the big industries of Russia. The automotive industry is also considered a highly volatile industry, contributing to around 2% of the world’s production.

In terms of the top exported commodities from Russia to other countries, the below provided Russia export data features the top commodities, divided on the basis of 2-digit level (Chapter). The top exports include mineral fuels & oils ($211.5 billion), followed by pearls & metals ($31.5 billion), iron & steel ($28.8 billion), fertilisers ($12.4 billion), and wood ($11.7 billion) along with other featured categories in the list, as per Russia exports 2021-2022. 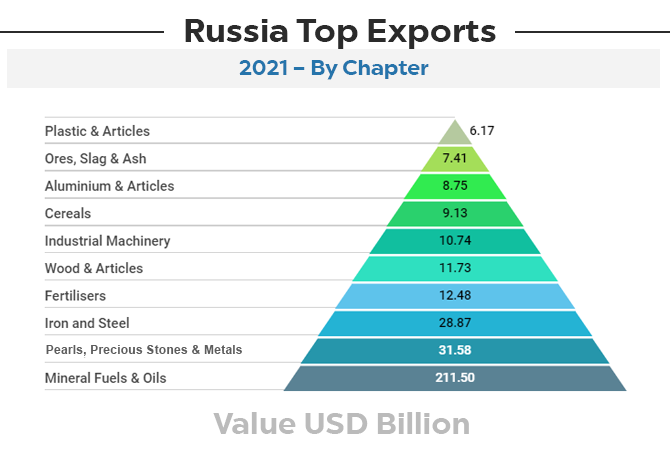 Further segregation of the products in the division of the products on the basis of “Heading” as the HS Code classification, the following data is provided. The top exports from Russia in 2021 includes: Crude Petroleum Products ($108.7 billion), Gold ($16.9 billion), Summer Diesel Fuel ($16.8 billion), Bituminous Coal ($11.5 billion), and LNG ($7.3 billion) along with others. 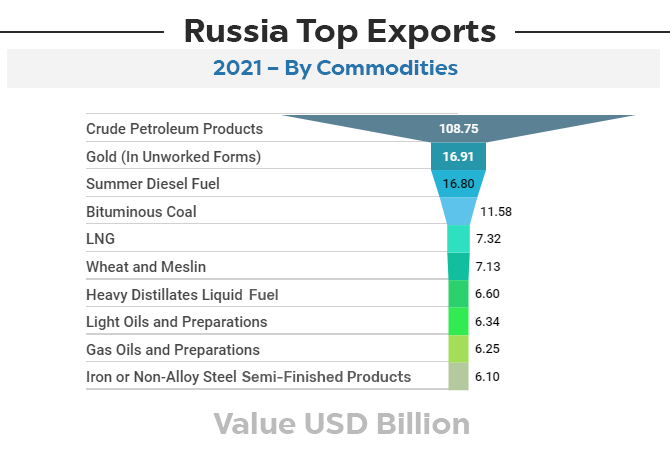 Which Countries Exports From Russia?

The list of countries also includes the United States of America, the country that is voting for the withdrawal of Russia from the given title of “most favoured nations”. The nations joining in with the USA’s decision are United Kingdom, European Union, Japan and other countries. 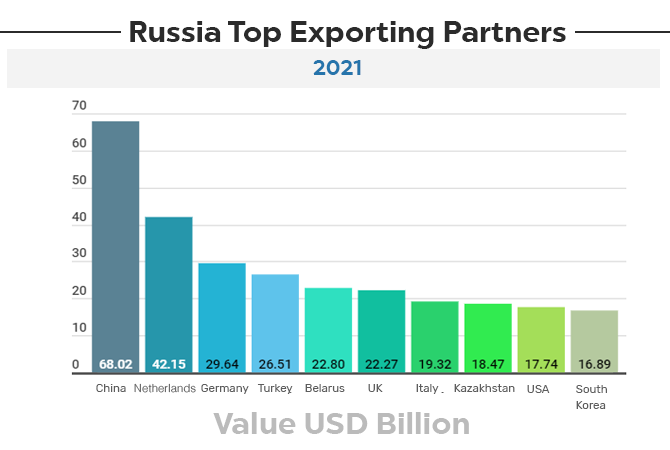 The Countries Which Rely On Russia

Russian industries are the valuable markets for most of the nations around the world who trade with Russia for a number of reasons. While the above shown statistics highlight the most exported commodities from Russia to other countries, it doesn’t reflect the whole picture. Along with a rich source of oil and natural gas, Russia also has favourable harvesting conditions, which allows the Russian Federation to export agricultural products such as wheat & sunflower seeds.

Many countries in the above-mentioned list are not entirely dependent on Russia. For example, Ukraine itself has a large production capacity of sunflower and its oil. The USA has its own gas reserves, and the EU has high potential for generating its own energy through “clean” sources.

As per our analysis for the shown top trading countries with Russia, we found that countries such as Belarus (49.6%), Kazakhstan (34.9%), Turkey (10.7%) are the ones that are reliant on Russia for its exports. The findings are on the basis of each country’s share value with Russia among their all trading partners, and not on the basis of Russia’s top importing countries only.

Are there any alternatives for the countries?

While this will totally depend on the new regulations introduced by the national government of countries to conduct a smooth transition of goods and services exchanged with each other, the countries can switch to alternative energy to shed off Russian energy exports. This is a big task.

Switching to alternative countries on the basis of specific commodities can work out better. For example, switching to China can be a better option for wheat exports. Considering China’s bilateral relationship with Russia, India is also another option.

Although there are going to be a number of challenges if countries has to limit the trade from Russia, this is not an easy and a practical solution for the countries who are especially reliant on Russia, and does not really have their own domestic capacity for the importing commodities.