According to sugar export data, Indian sugar mills have signed contracts to export 2 million tonnes in the new season that began on Oct 2019. With this, India hopes to supply at least 5 million tonnes of sugar to world countries in the 2019-20 season, nearly a 3rd higher than the previous year.

According to Export Genius data and market research report, India is the world’s larger sugar producer, which is all set to make new records of sugar exports this year. At 5 million tonnes, Indian exports would surpass their previous peak of 4.96 million tonnes shipped in 2007-08. This was resulted by a rally in international prices and a weak Indian rupee.

Higher sugar shipments from India could intensify a trade dispute at the World Trade Organization (WTO). Brazil has already said that India’s subsidies for sugar exports were not in line with WTO rules and would hurt free competition in the global market. Brazil, Australia and Guatemala have questioned the subsidies at the WTO. India, struggling with surplus sugar supplies, has approved a subsidy of 10,448 rupees ($145.58) a tonne for exports in the 2019-20 season. This move came for mills to clinch international sales deals early this year.

Indian sugar exporters have contracted to supply raw sugar at an average $300 a tonne and white sugar $330 a tonne on a free-on-board (FOB) in international market.

According to India export data, the country shipped sugar worth US$ 631 million in first quarter and US$ 558 million in second quarter of 2019. The figures were much higher than of same period in previous year. In 2018’s Q1 and Q2 sugar exports from India valued US$ 183 million and US$ 289 million in 2018.

Sugar Production and Consumption in India during Last 10 Years

A report on sugar export from India 2018 shows that In 2018-19, India produced an all-time high 33.1 million tonnes of sugar as compared to the figures of last 10 years. The country produced less sugar of 26.2 million tonnes in the last season. Let’s have a look at list of sugar production in various states with statistics recorded from Oct 2019 to Feb 2020, which have been collected from a report on sugar export from India 2019.

From consumption perspective, Indian people intake maximum amount of sugar in 2014-15 of 25.6 million tonnes. And the lowest sugar consumption of 20.8 million tonnes was recorded in 2010-11 in the last 10 years. 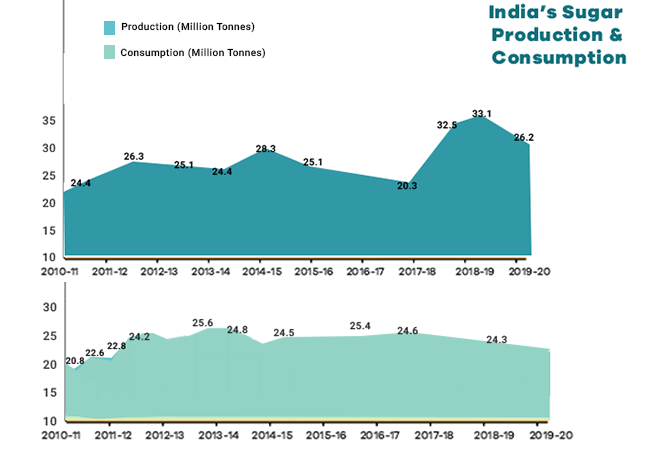 At 2-digit level HS Code, exports of sugar and sugar confectionery from India valued US$ 1,164 million in 2018, a marginal drop from the previous year. As we see India export statistics of sugar recorded in the last 10 years, we found that only year 2011 and 2012 saw positive growth in sugar exports, otherwise all other years registered fluctuated figures. 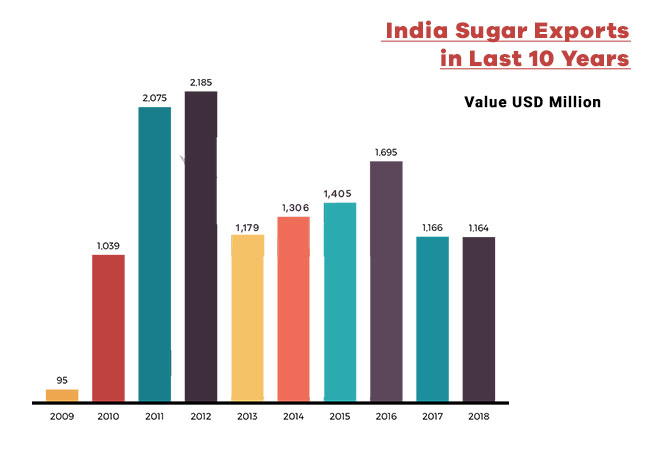 As per India customs data of sugar, Sudan stood as the top importer country of Indian sugar, which shared 18.5% value to total shipments. Here is the list of India’s top 10 export destinations of sugar with share in values recorded in 2018. 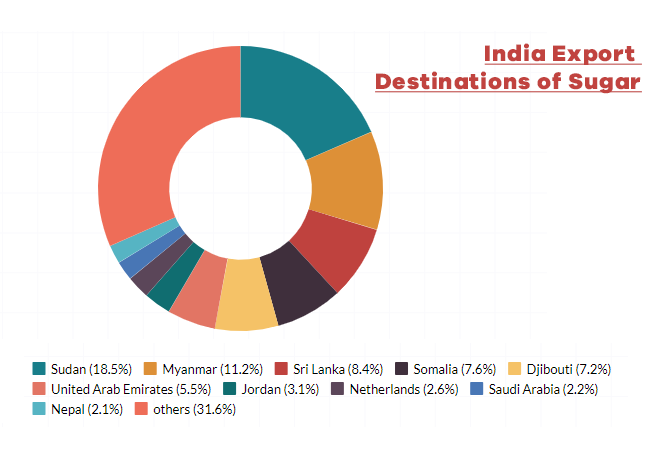 India ranked at 4th position in global sugar exports in 2018, with 4.1 percentage share. The country shipped sugar worth US$ 919.2 million in the said year. The top three sugar exporter countries were Brazil with US$ 6.5 billion, Thailand with US$ 2.6 billion and France with US$ 1.4 billion. Take a look at top 10 countries of sugar exports.

If you are engaged into import-export business of sugar, getting complete market information on sugar exports from India would be an advantage for you to make the right choice and decisions. Get India export data of sugar with details of sugar export companies in India. Look at the sample below to know what is covered in data.

***Other hidden columns like Date, Indian Exporter Name, Foreign Importer Name and many more are also covered in data.

According to Indian Sugar Mills Association (ISMA), the sugar output is likely to touch 26 million tonnes, down 21.5% from last year. In year 2020, India is all set to meet a new record of exporting 5 million tonnes of sugar in international markets.