India both imports and exports solar panel (HS Code 85414011), but it more imports solar equipment than exports. The country’s imports of solar panel increased by 39% and exports dropped to 56% between 2016 and 2017. One of the major reasons for this scenario is that Chinese solar panels are 10-20% cheaper than domestically manufactured solar modules and no manufacturer wants to willingly pay more. The other reason is that India’s solar exports mostly go to some European countries including Britain, which is the largest importer of Indian solar equipment accounting for 31% of India’s solar exports, followed by Italy and Belgium. The European nations have an anti-dumping policy against Chinese manufacturers. In this article, India imports of solar panel are discussed with 2017 figures.

With a plan of Indian government plan to undermine its own grand plans for the country’s solar power industry by installing 100 gigawatts of solar capacity by 2022, the country’s Directorate General of Safeguards (DGS) has proposed a 70% safeguard duty on import solar panels. This move will protect the domestic solar power sector. The DGS proposal has come a month after 5 Indian solar panel manufacturers – Mundra Solar, Jupiter Solar, Indosolar, Websol Energy and Helios sought protection from rising imports of cheaper solar products. On the other side, the Indian Solar Manufacturers Association has filed a petition emphasising on this move to be taken back as these manufacturers produce nearly half the solar cells and modules in the country. Also, from time to time, Indian government take measures like regulating minimum import price of solar panels in order to protect domestic manufacturers.

India’s imports of solar panel increased to USD 3782 million in 2017 from 2016’s USD 2896. According to a report on solar imports to India, which is released by Export Genius, the country imported solar equipment maximum in the March month of 2017. And its imports of solar modules recorded lowest in July month. From January, India recorded rise in solar panel imports till June, except February when figures declined. In July, import value of solar panels fell down sharply to 3.68% from June’s 10.98%. From August, the import figures of solar panels started rising but at a very slow pace and reached to 9.16% in December. How India performed in solar panel imports during all months of 2017? Find out from the chart and table given below. 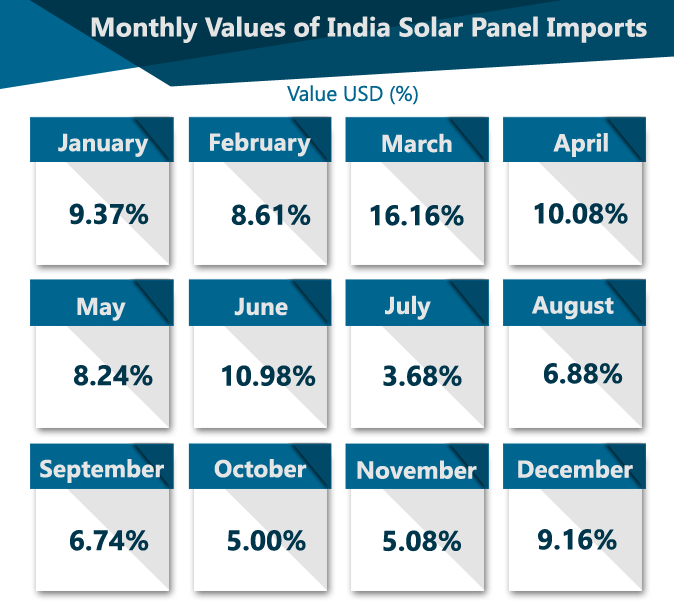 China is the largest exporter of solar panel to India, which accounted 87% share in value during 2017. India is importing solar panels from China in maximum quantity. The country imported solar equipment worth USD 3315 million from China in the given year. Malaysia stood at the 2nd position with more than 4% share in value. So, we can say that India is majorly depended on China to meet its demand of solar panels. A list of top 5 foreign countries of India’s solar panel imports is given below with their trade figures recorded in the year 2017. 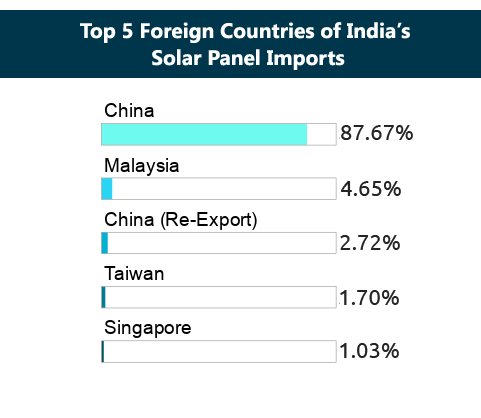 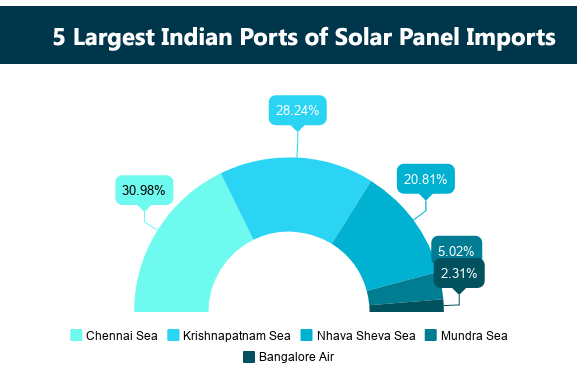 What You Gain from Our Report?

·         Monitor shipments of competitors by knowing details of solar panel importer in India.