Semiconductor Shortage Has Brought A Crisis in The Global Market

Semiconductor shortage has brought a technological crisis in the global market in electronics manufacturing, but especially the semiconductor industry and chip industry. The increasing usage of digital products and services has raised the demands for building the component. Semiconductor supply has come down due to the surging demand after the pandemic. A pre-pandemic environment is suspected to worsen it. 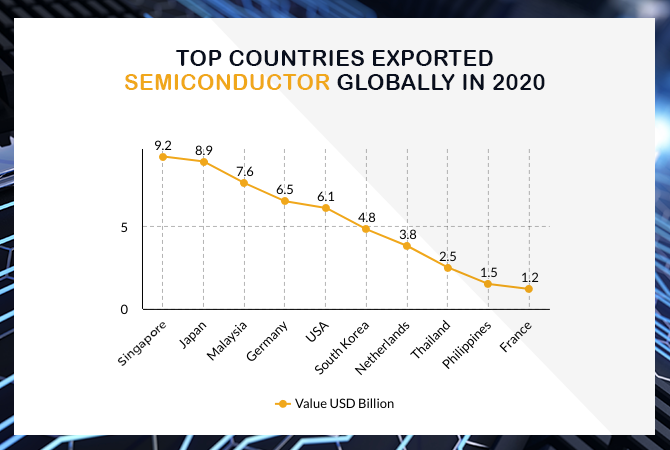 Shortage of semiconductors has caused the failure in the supply chain due to only one component present in it. A component named as “display driver”, only a dollar part, is responsible for conveying basic instructions to any device to illuminate the screen. The screens can be your phone, laptop, and even vehicle’s navigation system. Many of these are used mainly for electronic devices such as laptops and mobile phones. Automakers such as Ford Motor Co. and Volkswagen AG also use semiconductor chips while building their vehicles for multiple functions such as engine management, automatic breaking, navigation assistance, and assisted driving.

According to the US-based Semiconductor Industry Association (SIA), global sales rose by over 14.7% in February 2021. But the figure collected from and made by World Semiconductor Trade Statistics (WSTS), shows that the sales figures for February are 1.0% less than January 2021. The official from SIA has stated that figures of the first two months of the year 2021 have vigorously surpassed the figures of early 2020, when Coronavirus begin to come in highlights.

Trends such as work-from-home and gaming consoles have increased the demand for electronic devices since pandemic in 2020. Seeing the recent returning wave of the pandemic, the semiconductor manufacturing companies are expecting to see more demand. The firms building the aforementioned basic component - display driver, are falling short in productions due to a heavy shortage of semiconductors in relation to meeting the demand.

Winter storm weather, recent fire in a Japanese factory, insufficiency to meet the demand even productions are going on a 100% caliber… All the factors are putting questions on whether the industry will overcome the crisis of semiconductor shortage.

The coming shortage of semiconductors has made the overcoming look difficult. But a few weeks ago, one of the biggest chip-maker in the world, Intel, announced a plan to meet the demand globally. Intel has announced to build two new plants in Arizona. The corporation committed to investing $20 Billion in the manufacturing of semiconductor chips.

Taiwan Semiconductor Manufacturing Company (TSMS), the world’s largest chipmaker and a major chip supplier for Apple Inc. has announced to invest $100 Billion in the next three years.

To overcome the shortage of semiconductors, the newly-elected president of the USA, Joe Biden, has pressed a statement publicly about his infrastructure plan having $50 Billion for the American Semiconductor Industry.

The plans of Joe Biden and Intel Corp. along with all other execution of different plans are going to take their own respective time. Many tycoons in chip-making industry have stated their own endeavors for the betterment of the whole situation. We shall see ‘where the “chips” may fall’.