Seafood Industry in India – List of Seafood Exporters in India

India is blessed with a coastline of over 8118 km, 2.02 million sq. km of EEZ and 0.5 million sq. km. Varieties of seafood in India include – Fish, Prawns, Lobster, Oysters, Roe, Shellfish, Crustaceans, Shrimp, Molluscs, Echinoderms, Medusozoa, Tunicates, etc. With robust investments in infrastructure, India’s fish production is expected to cross 14 million MT by 2018 from the current level of over 9 million MT.

Indian marine waters are home to over 1700 fish species including 200 commercially significant species, while the sector employs more than 15 million people and fish eaters account for over half of country’s total production. India is the second largest source of aquaculture production in the world, after China.

With the growing demand for Indian seafood products globally, the dynamics of the seafood business in India is changing fast. There has been a tremendous growth in the resources and infrastructure of the Indian seafood industry in the recent years. In order to process the infrastructure of seafood industry efficiently, India has an installed processing capacity of 23000 M.T with 506 state-of-the-art processing plants, out of which more than 62% of them are EU approved plants.

Striking a new high, India’s exports of seafood stood at 1377244 tonnes earned INR 45,106.89 crore in 2017-18. As per the latest seafood shipment data of India available with Export Genius, a leading market research agency, the quantity was up by 21%, while the value rose 19.1% over the previous year. In dollar terms, seafood exports from India valued at US$ 7.08 billion in 2017, as against $ 5.77 billion in 2016 with frozen shrimp and fish continuing to dominate the export basket.

With continuous growth in the seafood industry, Marine Products Export Development Authority (MPEDA) is hopeful to achieve an export target of $ 10 billion by 2022. Despite drop on global shrimp prices, increased supply from Vietnam & Thailand, daunting challenges of oversupply and issues related to antibiotic residues; India’s seafood industry has been maintaining its growth streaks. The Marine Products Export Development Authority (MPEDA) is a government body, which was set up in 1972 for promoting the marine industry with special reference to exports from India.

India’s JNP, Krishnapatnam, Pipavav, Kolkata, Kochi and Vishakhapatnam were the major ports for the marine products cargo in 2017. 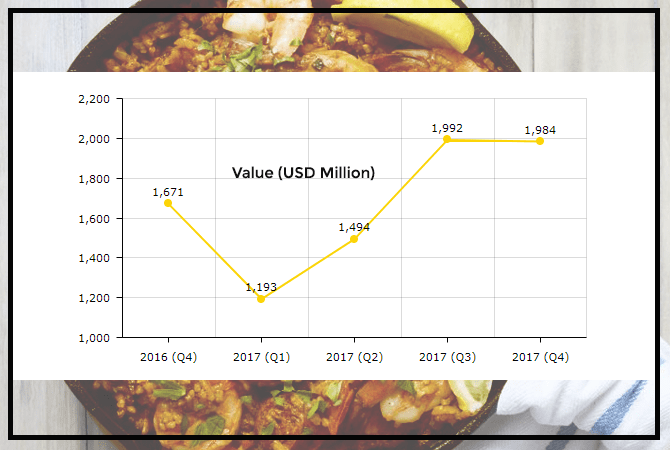 HS Code-wise Analysis of Seafood Exports from India in 2017

Seafood products in India fall under HS Code 03, which defines fish and crustaceans, molluscs and other aquatic invertebrates. Chapter 03 is further classified into 8 sections under 4-digit level HS Code. These are mentioned in the table and chart given below with their trade statistics recorded in 2017.

The overall shrimp exports from India stood at 565980 tonnes in 2017. Japan was the major market for black tiger shrimps.

Frozen fish export from India accounted 25.64% in quantity and 10.35% in earnings during 2017. Export of chilled items showed a decline in this year and frozen cuttlefish registered a growth in exports. 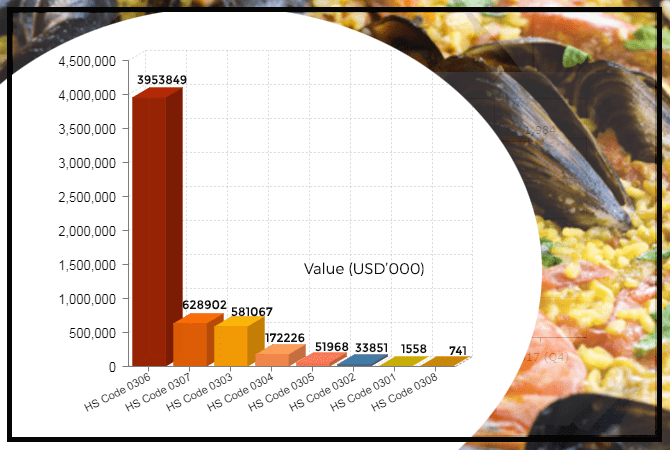 The United States of America and South East Asia retained their positions as the major import markets of India’s seafood products with a share of 32.76% and 31.59% in dollar terms respectively recorded in 2017. They were followed by the European Union (EU) with 15.77% share in value, Japan with 6.29%, Middle East with 4.10% and China with 3.21% share in value of seafood. Here is the list of top 10 countries that purchased seafood varieties from India during 2017.

>> Read More about US Shrimp Imports.

About Seafood Exporters Association of India

Seafood Exporters Association of India (SEAI) was established 50 years ago with an objective to protect and promote the interest of companies who are engaged in the seafood industry and to develop global trade of seafood from India. Based in Cochin, Kerala, the association has 8 regional offices in Kerala, Karnataka, Tamil Nadu, Andhra Pradesh, Maharashtra, West Bengal, Orissa and Gujarat.

About National Fisheries Development Board

Established in 2006, the National Fisheries Development Board (NFDB) is an autonomous organization under the administrative control of the Ministry of Agriculture and Farmers Welfare, Animal Husbandry, Dairying & Fisheries, Government of India. The aim of this board is to coordinate fishery development in an entreated & holistic manner and enhance fish production & productivity in the country.

Check the sample of India exports lobster to know the fields covered in the data.

In the end, it is concluded that India is the world’s largest market for seafood, particularly shrimp and fish. Now we have to wait and watch that whether India could touch its target of exporting $10 billion seafood by year 2022. Meanwhile, fill up our enquiry form to buy the complete India export data of seafood and its varieties with accurate shipment records at the best possible prices.