Salt exports from Asian countries valued USD 544 million in 2019, a slight down from the previous year. In the world, salt exports totaled USD 2,858 million during the same year. The Asian salt export market shared about 20% to global exports. According to Export Genius global trade data, the highest number of salt shipments was departed from India in the Asian continent, followed by China and Pakistan. Let’s check overall Asian market of salt with Asia export statistics.

As per Asia countries export data of salt, Asia has been recording a growth in salt exports since 2015. The dollar amount increased from 2015 to 2019. Approx. 20M tonnes of salt was exported by Asian countries in 2019, which rose from 16M tonnes recorded in the previous year. In general, salt exports continue to indicate buoyant growth. The pace of growth was the most pronounced in 2011 with an increase of 44% year-to-year. The volume of exports peaked in 2018 and will continue to see a positive growth, however year 2020 looks little grim for Asian exporters due to ongoing coronavirus pandemic, which has affected international trade to a large extent. 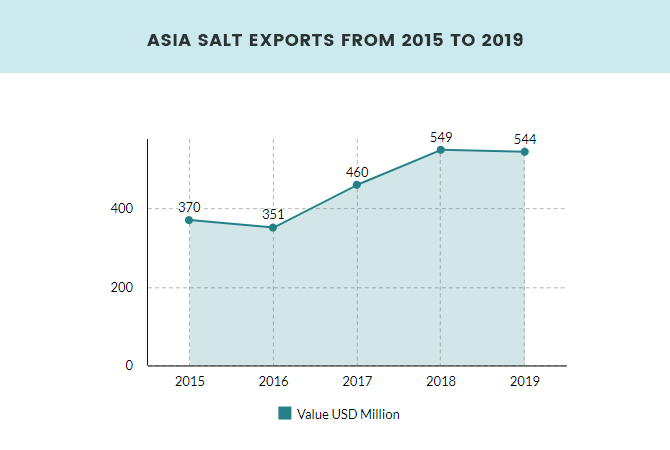 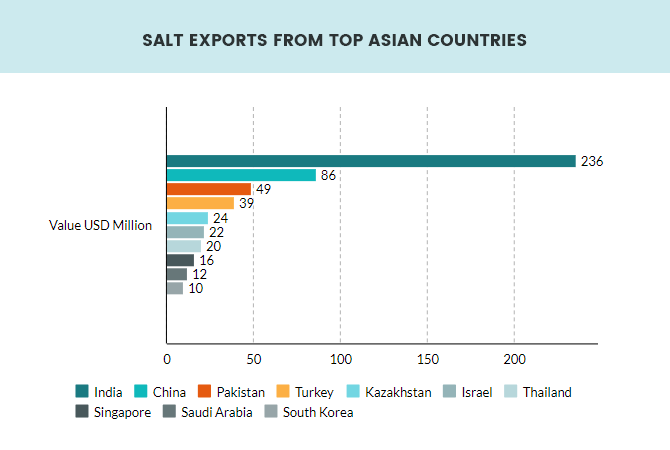 In 2019, approx. 153M tonnes of salt was produced in Asia, growing 2.1% against the previous year. The total output volume rose at an average annual rate of +2.3% from 2007 to 2019; the trend pattern remained consistent, with somewhat noticeable fluctuations being observed in certain years. In value terms, salt production totaled USD 8.5 billion estimated in 2019.

China remains the largest salt consuming country in Asia, comprising approx. 57% of total consumption. In 2019, China consumed about 74M tonnes of salt among in the Asian continent. India stood at the second position with 16M tonnes of salt consumption. The third position in this ranking was occupied by Japan (5.7M tonnes), with a 4.4% share. In value terms, China (USD 5.3 billion) led the salt market alone in Asia during 2019, followed by Pakistan (USD 435 million) and Japan.

Salt comes under 2501 HS Code and is one of the major products produced and consumed in the Asian continent. India stood as the largest exporter country of salt in Asia during 2019. What will be the position of salt market in 2020 when world is fighting against deadly coronavirus? Certainly, there will be much impact on salt exports from India and other Asian countries from Covid-19 pandemic as global international trade has been disrupted.