For the first time in a decade, the world’s largest exporter of wheat, Russia has suspended supply of wheat to foreign importers who are rushing to import the grain, amid Coronavirus pandemic. Due to rising number of Covid-19 cases, Russian government took the decision in order to meet domestic consumption of wheat and other food grains. According to Russia export data, Russia’s wheat exports in 2019 totalled USD 6.3 billion, down from 2018’s USD 8.4 billion. In 2020, the value of wheat exports from Russia is very likely to fall drastically due to impact of novel coronavirus.

The ban on exports of wheat from Russia will only last until farmers start harvesting in July, some other nearby nations have also restricted grain exports, threatening to reroute international trade and fueling worries about food shortages and higher prices. Countries from Egypt to Turkey are trying to load up on imports while they still can, and Russian suppliers of wheat have been feeding that demand. Russia has a history of disrupting the wheat market through restrictions or taxes, but last imposed an outright ban in year 2010 after drought destroyed crops.

Who will Get Benefited from Russia Banning Wheat Exports?

Banning Russian wheat exports could benefit rival suppliers such as the United States and European Union. Egypt, which is the second largest buyer of Russian wheat, may look EU as an alternative. The North African nation is heavily reliant on Black Sea grain, but has already boosted French purchases this season due to more competitive prices. 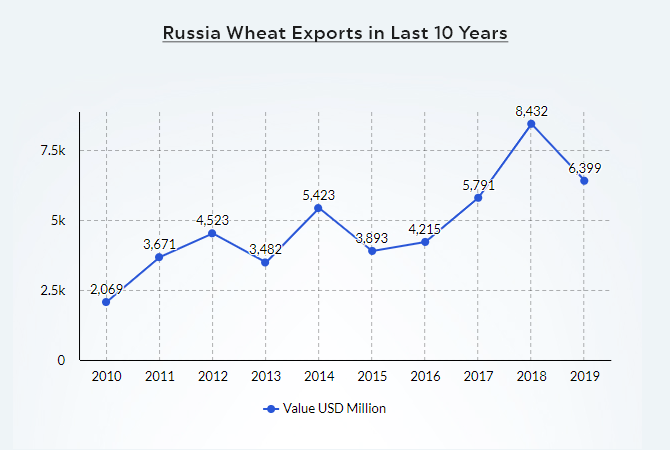 What are the Major Export Destinations of Russian Wheat?

Turkey is the largest buyer of Russian wheat. As per Russia export statistics, Turkey purchased wheat worth USD 1.3 billion from Russia in 2019. Egypt was second net importer of Russian wheat with value of shipments recorded USD 1.2 billion. Below given chart and table shows percentage share of Russia’s top export partners of wheat. 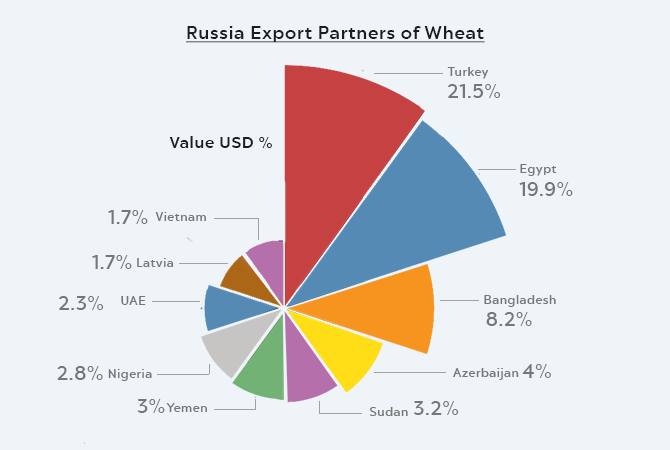 Wheat Exports in the World

Worldwide wheat exports by country totalled an estimated USD 38.8 billion in 2019. Among continents, European countries shipped over half of global wheat exports during 2019 with shipments amounting to USD 20.2 billion or about 50% of total worldwide sales. Russia is the largest exporter of wheat in the world with annual sales of USD 6.4 billion recorded in 2019. Here is the list of world’s top 10 wheat exporters with their dollar amount and percentage share recorded in 2019.

Certainly, global wheat industry, like other sectors has also affected by the coronavirus as gap between demand and consumption is getting widened. Russia, which is a net exporter of wheat, is struggling to meet the wheat demand of people due to rising Covid-19 cases. At present, Russia is on 3rd position in coronavirus cases. As a result, Russia’s economy would also see poor growth in 2020.