Wheat is one of the world’s most commonly consumed cereal grains. It comes from a type of grass (Triticum) that is grown in countries around the globe. Wheat is grown on more land area than any other food crop. Russia has become the world’s leading wheat exporter, but the country has moved to limit the quantity shipped abroad in an effort to dampen prices on its home market. Russia’s wheat production remains subject to the variations in its harsh winters. It is a wheat export heavyweight, aided by low costs and bumper crops in recent years. Global demand for wheat is rising due to adhesive properties of gluten proteins, which facilitate the production of processed foods, whose consumption is increasing due to westernization of the diet.

Russia has been in the top 10 exporters of grain crops, including barley, corn, rye and oats, but especially wheat. According to Russia export data of wheat, Russia exported USD 2,484 million worth of wheat during Jan-Mar 2021, down from USD 4,097 million recorded in the previous quarter. Russia saw a tremendous growth in exports of wheat in all quarters of 2020. Below given chart shows dollar amount of wheat exports from Russia recorded from first quarter of 2020 to first quarter of 2021. 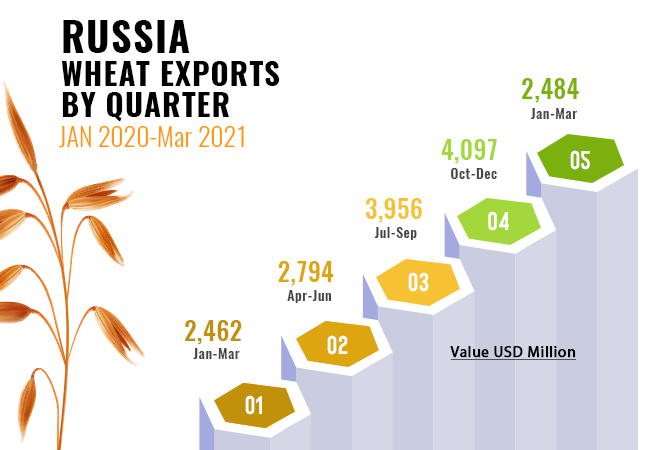 Russia competes with the European Union for the rank of the world’s largest wheat exporter. Egypt, Turkey and Bangladesh are the largest buyers of its wheat. Top buyer Egypt favored European Union and Ukraine grain in its latest tenders including rare Romanian cargoes. Other major export destinations of Russian wheat are Azerbaijan, Sudan, Pakistan, Nigeria, Yemen, Tanzania and United Arab Emirates.

Russia export data shows Russia’s top 10 export partners of wheat accounted for 68.5% to overall value of shipments in 2020. From data visualization, analyze share in value of top countries to which Russia supplied wheat the given year. 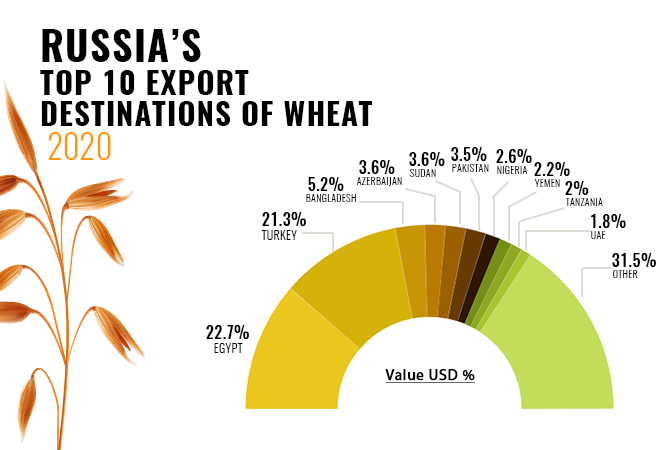 Russia may raise grain exports by a 3 million tonnes to 51 million tonnes in the 2021/22 marketing season, which starts on July 1, despite a lower crop. The country is currently ensuring that all grain isn’t exported, but may consider lifting the shipment measures once the domestic market stabilizes.