·         Any change in global trade would benefit Asia, Latin America, and Africa.

First, it was the Covid-19 pandemic. Then came the Russia-Ukraine war. With two major global crises back to back, the supply chain of commodities has been disrupted and it is unlikely to get on track until at least the end of the year. The war in Ukraine, in particular, has caused countries to think about the need for more dependable trading partners. Here’s an overall analysis of the Russia-Ukraine war’s impact on global trade blocs.

The first bloc would comprise of European Union, the United States, and their allies who have slapped sanctions on Russia and are aligned in isolating Russia. Those allies could include the United Kingdom and Japan. The second bloc may be countries that will seek to straddle both sides. There would be a bloc of countries like India and China that maintain trade with both the sanctioning allies and Russia. They need to create a balance between Russia, dependent on Russian energy products, and large economies in the first bloc which account for a significant proportion of their export demand.

Russia’s invasion of Ukraine has impacted trade routes by both land and sea and the volumes passing along them. Since the war started, shippers have avoided the Black Sea, where Russia’s military activity has blocked commercial shipping. That’s caused congestion in other ports in Europe because shippers have had to change their routes.

Energy prices soared this year as Russia’s onslaught in Ukraine destabilized the markets and Western countries slapped sanctions on Moscow. The European Union has agreed to ban 90% of Russian oil imports by end of the year. According to our database, the EU nations imported US$52.4 billion worth of crude oil from Russia in 2021, an increase from US$35.0 billion reported in 2020.

The European Union receives about 40% of its natural gas from Russian pipelines and about a quarter of that flows through Ukraine. Our online platform covering essential data shows that the EU countries imported Russian gas worth US$4.1 billion in 2021. That dollar amount increased from US$3.2 billion reported in 2020. Here’s a quick analysis of the EU’s imports of Russian crude oil and gas by a quarter in data visualization. 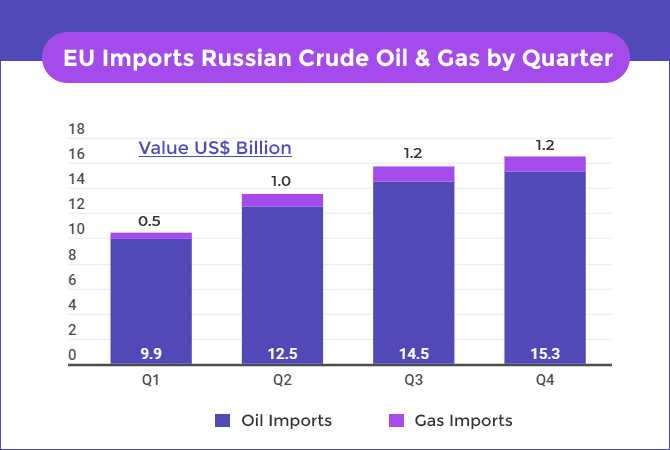 Crucial grain exports such as wheat have also been affected. Millions of tons of wheat from Ukraine, one of the world’s biggest wheat exporters, have been stuck in the country, unable to get to countries that need them. That’s because Russia’s military forces have been blocking the Black Sea, where key Ukrainian ports are. According to the market intelligence reports, before the war, Ukrainian Black Sea ports accounted for around 90% of its grain exports. So, the global economy becomes more regionalized – shorter supply chains with reliable partners.

The changes in global trade due to the Russia-Ukraine war would cause some economies to benefit, such as Asia, Latin America, and Africa. Exports will be diverted requiring new markets to be found for commodities, and logistics put in place to accommodate the new trade flows. Routes could change and many benefit some Asian countries such as Vietnam, where more companies are already manufacturing their goods.

Russia would likely be the biggest loser as it can pivot some trade links and will become excluded from a large proportion of the global economy. Take a look at Russia’s top imports and exports reported in 2021. 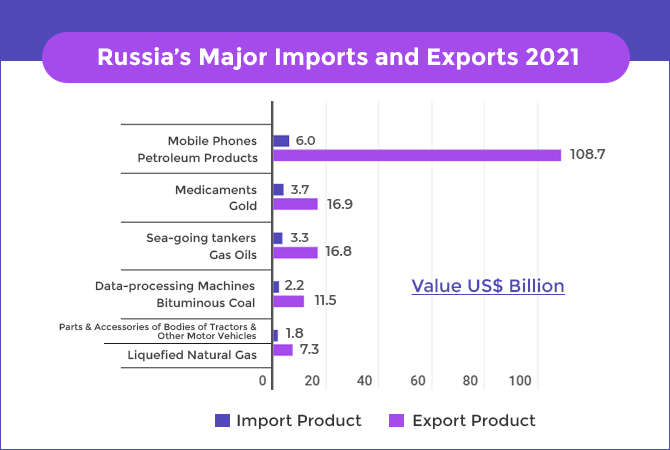 Singapore would also lose out as shippers go from the emerging manufacturing hubs of Vietnam and Cambodia directly to the U.S. West Coast.

Overall, it is expected that there will be a lower reliance on the Big East-West trade routes between China and Europe, as well as China and the United States. So, we have to wait and watch how long this Russia-Ukraine war will continue and analyze its impact on the global supply chain.