How much machinery Russia imports from other countries? If we look at Russia import statistics of machinery, we found that Russia imported machinery worth USD 243,780 million in 2019, rose from 2018’s 238,151 million. Russia has been recording an increase in import value of machinery for the three consecutive years. According to Russia import data, automatic data processing machine was the largest import commodity under machinery category in 2019. Russia’s top import partner of machinery was China, with share in value of 22.2%. Let’s get a wider perspective of Russia’s imports of machinery on the basis of year, product and country.

Russia’s imports of machinery rose in 2011 from 2010, which declined from 2012 to 2015. Thereafter, the import value of machinery shipments rose from 2016 to 2019. Below given chart and table shows dollar amount of machinery imports to Russia recorded in the last 10 years. 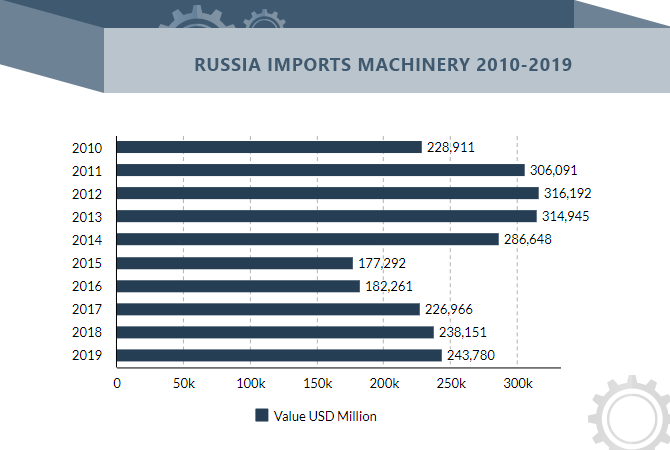 These countries accounted 62.7% to overall value of export shipments of machinery in 2019. Below given chart and table shows value in percentage of Russia’s top 10 import partners of machinery. 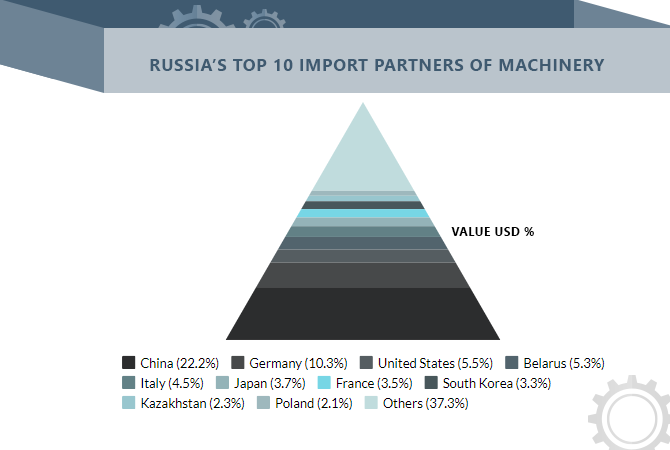 Russia is a transcontinental country located in Eastern Europe and Northern Asia. Russia’s largest import commodity in 2019 was machinery, which shared 17.74% to total Russia imports. Get Russia import data of machinery with shipping details right here.