Russia is the third largest wheat exporting country in the world. However, USA and Canada are the top wheat exporters. Russia did sales of USD 4215.803 million from wheat exports during the year 2016. It represents 11.6% of world exports for this product. As per the wheat export data of Russia, a total of 25326784 tons wheat has exported from Russia in 2016. Wheat exports from Russia recorded highest to Egypt. Russia export wheat in four categories which are given below:

Wheat industry in Russia has shown a positive growth from 2015-16 and growth of 7% recorded in export value in the same period. While 14% growth in the quantity of wheat exports recorded between 2012 and 2016. Here, we take a comprehensive look at Russia wheat export data which is analysed on the basis of HS code, destination countries etc.

Wheat and meslin is the most demanded wheat category in other countries. It comes under HS code 100199 and registered export sales of USD 4170 million in 2016. This category doesn’t include seed for sowing and durum wheat. Russia’s share of Meslin and wheat exports is 12.9% of total world exports of this product. However, Russia did export sales of USD 33383 from durum wheat which excludes seed for sowing and this product come under HS code 100119. Refer the following table and graphical representation to check the HS code wise analysis of Russia What Exports. 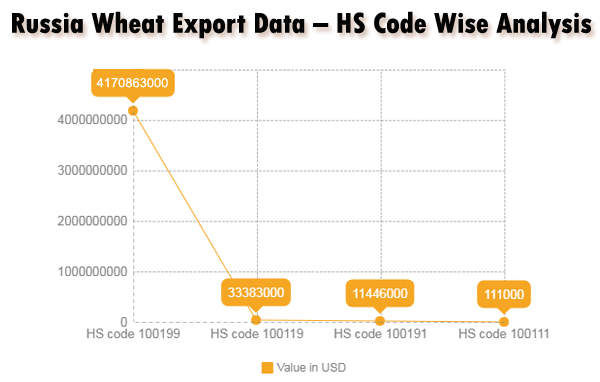 Russia is mainly exporting wheat to Egypt and Turkey while Bangladesh, Nigeria and Azerbaijan are next in the list of its top destination countries. Russia did wheat export business of USD 988 million from Egypt during the year 2016. It represents 23.5% of total value of Russia wheat exports. Russia has exported wheat to Egypt in quantity of 5823786 tons. As per wheat export data, Russia exports to Egypt with the unit value of USD 170 per tonne in 2016.

Turkey is also the main export market for Russia, after Egypt. Russia has exported to Turkey in 2016 with the value of USD 424 million which represent 10.1% of the total wheat exports. In terms of quantity, a total of 2648057 tons of wheat has been exported to Turkey. As per the calculation, it costs USD 170 per tonne for Turkey. 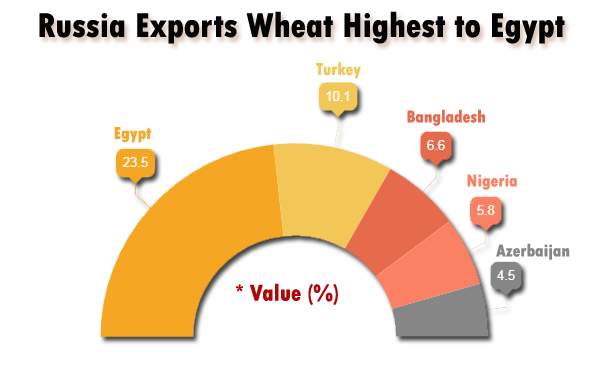 Want to buy Wheat from Russia? You must have an idea about the active wheat exporters in Russia. Also, you should know the unit price of wheat for your country. In Wheat export data of Russia, you will find the complete shipping details departs from Russia. Check the following sample to know the fields we cover in our trade report.

In our report, we cover all the fields of shipments. The other details like shipper name and consignee name that we have not mentioned in sample data that will be available offline only. Subscribe our report to get the complete details. We customize the report as per your requirements and you will get the following fields like brands, types, exporters, ports, value, quantity etc.