The Indian rupee hit 80 per dollar for the first time ever on 19th July 2022. After a record low of 80.06, it edged higher to 79.93 per dollar on 20th July 2022. The rupee fell after breaching a series of all-time lows and declining over 7% this year from about 74 at the start of 2022. What does it mean for individuals and the Indian economy? Let’s try to understand the weakening of the rupee against the dollar from the information.

What is the rupee exchange rate?

The rupee’s exchange rate vis-à-vis the US dollar is essentially the number of rupees one needs to buy a single US dollar. This is an important metric not just to buy American commodities but also for a whole host of other goods and services including crude oil for which Indian citizens and companies need dollars. When the rupee depreciates, buying (importing) something from outside India becomes costlier.

If one is trying to sell (export) goods and services to the rest of the world especially the United States, a falling rupee makes Indian goods more competitive because depreciation makes it cheaper for foreigners to buy commodities from India.

What does a weakening rupee mean?

The rupee was last at 80.0163 against the dollar after opening at 79.9863 on 19th July 2022. On 18th July, the rupee closed at 79.97 per dollar. The Indian currency has plunged over 7% this year, with it closing at a record low in six of the last seven sessions. The rupee has been driven by a global stampede into safe-haven US dollars on risks of global recessions and battered by current account deficits, widening trade, and the exodus of foreign investors. After surging more than $5 a barrel in the previous session, crude oil prices on 19th July 2022 took a breather as a plunging dollar supported buying interest. Here are key highlights:

Higher costs of imports: A weaker currency will make you pay more rupees for international purchases than you made previously.

Higher fuel and energy prices: India imports more than 80% of its oil requirements and a weakening currency adds to the cost of international oil and energy products. As a result, consumers in India have to pay more for oil as oil refineries and marketing companies pass on the additional exchange rate burden.

High inflation: According to the Reserve Bank of India (RBI) April Monetary Policy Report, a 5% depreciation of the Indian rupee from the baseline (76 per dollar) could edge inflation up around 20 bps while GDP growth could be higher by around 15 bps through increased net exports.

Pay more for overseas travel: A weakening currency will mean that you would now have to pay more for the same foreign education and international travel than you did before.

Why is the rupee weakening against the dollar?

In simple words, the rupee is weakening against the dollar because of the greater demand for dollars in the market than for the rupee. Since the beginning of 2022, as prices of crude oil and other products have started increasing in the wake of the war in Ukraine, India’s Current Account Deficit has widened sharply. This has put pressure on the rupee to depreciate because Indians are demanding more dollars to import commodities from outside the country.

More and more foreign investors have been pulling money out of the Indian markets since the start of 2022. This has happened because the interest rates in the United States are increasing much faster than in India. The net result of both these trends is that the demand for the rupee has fallen sharply. This is the reason why the rupee has been losing value against the dollar.

Will internationalization of the rupee bring benefits to the Indian economy?

The internationalization of the rupee will boost integration in the global economy via increased trade and FDI flows. India is among the top 10 economies in the world and an important trade partner of several countries. In 2021-22, India’s total trade with the world reached over US$1 trillion, with exports crossing the US$400 billion mark for the first time in a fiscal year.

India has been witnessing a trade deficit for the past years. Its imports are higher than its exports. Let’s understand India’s trade deficit recorded in the last ten years. 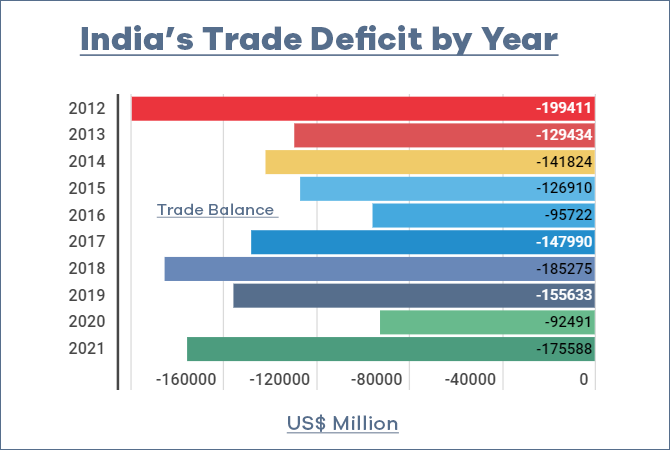 The primary reason for this flourishing growth has been an increase in the prices of key commodity imports, particularly crude oil. It is anticipated that using the rupee for major imports will help reduce the trade deficit.

The internationalization of the rupee would also help in reducing currency mismatch for financial institutions. Lastly, it will go a long way in increasing India’s trade with its South Asian neighbours. With Bhutan and Nepal, India’s international transactions were also officially allowed to be conducted using the rupee before.

Conclusion – For the Indian rupee, there is not an easy road ahead. There must be adequate reforms to develop and strengthen financial markets that are freely accessible by both residents and non-residents and improve liquidity in financial markets. This would require India to liberalize its capital account to freely allow the flow of capital across international borders.