Rice, which comes under HS Code 1006, is one of the world’s most important staple food products. In Indonesia, there are at least 45 varieties of rice for wet-field production (Sawah) and 150 varieties of rice for dry-field production. Among top 5 rice producing countries, Indonesia rank third. China is the top producing country of rice, followed by India, while, Bangladesh and Vietnam stood at fourth and fifth position respectively. Despite the fact that Indonesia is among the major producer countries of rice, it stands at 7th position among major rice importing countries. In fact, Indonesia is among the largest rice consumers across the world. The nation’s per capita rice consumption was recorded at nearly 150 kilogram of rice, per person & per year in 2017. To control the rising prices of rice and meet the demand of its people, Indonesia has been importing more rice from global countries including Thailand, Vietnam and India since Jan 2018.

As per Export Genius report on rice import data of Indonesia, the country’s total imports of rice valued at $13397000 in 2017. Our report gives a fine knowledge of rice market in Indonesia with accurate facts and figures covered in shipments that we receive from our various valid sources. Our Indonesia customs data of rice generally covers wide-ranging fields including Date of Shipment, HS Code, Product Description, Indonesian Importer Name of Rice, Foreign Exporter Name of Rice, Foreign Country, Port, Value, Quantity, etc. Apart from Indonesia, we also provide import export data of 60+ countries and analytical reports based on product keywords like brand, model, variety, type, etc. of 20+ countries. Below are few rice buyers in Indonesia:

Indonesia Plans to Import More Rice in 2018 to Control Prices

In order to meet the rising consumption of rice, Indonesia’s Trade Ministry has issued a permit for State Logistics Agency (Bulog) to purchase an additional 500,000 tons of rice in 2018. The rice, which will be imported from several countries including India, Pakistan, Cambodia, Myanmar, Thailand and Vietnam, is expected to curb the price of rice, which is still above the price ceiling decided by the government.

As per the Agriculture Ministry’s Food Sovereignty Agency, the decision to purchase additional rice was to guarantee the availability of the commodity in the market because the retail price of rice was still higher than the price ceiling of Rp 9,400 per kilogram in the regions of Lampung, Java, Bali, South Sumatra, West Nusa Tenggara and Sulawesi.

The Trade Ministry of Indonesia has said that option to import more rice from other countries is open to bolster stocks as prices have increased in recent weeks. As per rice import data of Indonesia, rice stocks at 950,000 tons, most of which is low-grade rice to be distributed as aid for low-income families. Meanwhile, rice stocks for commercial purposes are down to just 11,000 tons.

According to the National Strategic Food Prices Information Center in Indonesia, the price of medium-quality rice reached Rp 14,100 (99 US cents) per kilogram on an average in early months of 2018, which was much higher than the price ceiling of Rp 9,450 per kg. The highest price of rice was found in West Papua at Rp 14,250 per kg, exceeding the province’s price ceiling of Rp 10,250 per kg. Meanwhile, the lowest price of rice was found in West Nusa Tanggara at Rp 9,740 per kg, which was still higher than the province’s price ceiling. Besides this, the Indonesia government has taken some measures to control the price of rice including urging distributors, suppliers and traders to avoid hoarding rice.

If we see rice shipment data of Indonesia of last 5 years, we found that the country recorded the highest import value of rice in year 2013. Since, the imports of rice in Indonesia have been declining and in 2017, it valued at $13397000. In 2013, this figure was $44989000. However, as per market research experts, total imports of rice in Indonesia is supposed to rise in 2018, as the country has been purchasing rice from global countries since Jan 2018. And Indonesia is planning to import more rice in order to control rising price of rice and meeting the domestic demand of the product. 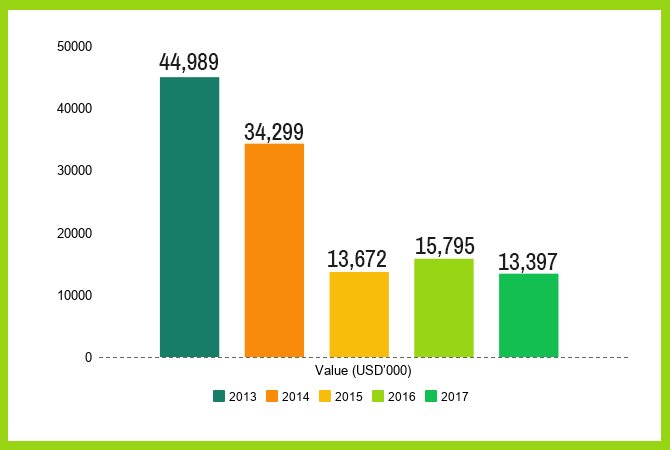 In order to boost sagging rice exports from the country, Indonesia has signed an agreement with India for purchasing rice to get over its temporary deficit of the cereal. On 07 March 2018, Indonesia received 10,000 tons of imported rice at its Belawan Port in North Sumatra. Let’s have a look at Indonesia rice imports from India during the last 5 years. 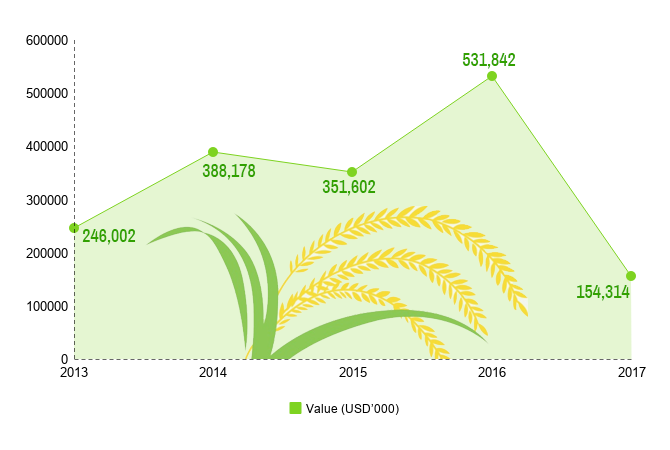 Indonesian Government Decides to Import Rice from Vietnam and Thailand

Since December 2017, Indonesia has been experiencing a rise in prices of rice. From Rp 9,526 per kilogram in Dec 2017, the price of rice rose to Rp 14,100 per kilogram in early months of 2018. In order to put a hold in rising prices of rice and meeting the demand of rice, the Indonesian government has purchased more rice from Vietnam and Thailand in the last few months, where prices of rice are cheaper than Indonesia. The type of rice purchased from Vietnam and Thailand is called “special rice” and not premium because it is not grown in the country.

Thailand is the largest supplier of rice to Indonesia, which shared 41.4% value to total rice imports. After Thailand; Pakistan, Myanmar, India, China and Vietnam are the main exporter countries of rice to Indonesia. Let’s check out the trade statistics of these countries recorded in 2017. 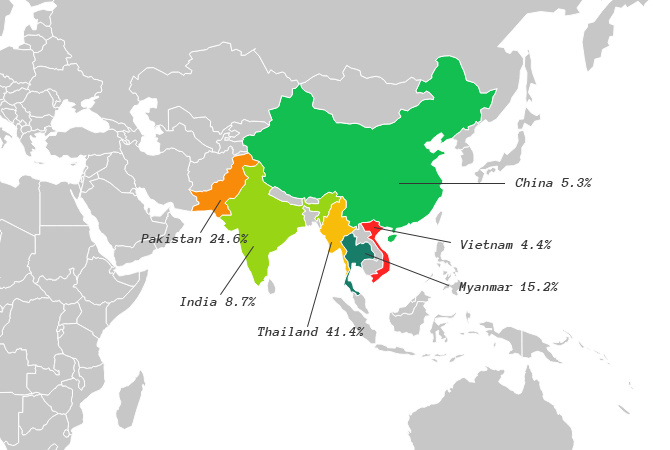 When supplying rice to Indonesia, one of the biggest challenges that most exporters experience is locating the genuine rice buyers in Indonesia. Export Genius Indonesia import data of rice gives detailed information including active rice importers in Indonesia about rice shipments that enter into Indonesian ports via sea, air or road. So, if you want to get your business partners, just buy our data. Look at the Indonesia import sample of rice below to know which columns we provide in the data.

In 2018, Indonesia has plans to import more rice to control the rising pricing and meet the domestic rice demand. So, it is great business opportunity for exporters to supply rice to Indonesia. To find genuine rice buyers in Indonesia, subscribe for rice import data of Indonesia right now.