India is the world’s biggest buyer of palm oil, which accounted USD 9748 million during 2017. The country imported 13131666 MTS of palm oil from the global countries, especially from Indonesia and Malaysia in the last year. According to a report on palm oil imports in India, revealed by Export Genius; June month recorded maximum import shipments of crude palm oil, which accounted USD 1121 million. Total 1512360 MTS of palm oil imported into India in the month of June. Our analysis report provides a wider and better picture of palm oil import market of India. It is prepared by our market research team on the basis of authentic palm oil import data true palm oil shipment records of India received from customs and other authorized sources. Here are important points from this report.

Palm oil (HS Code 1511) is a fatty edible vegetable oil and yellowish in colour. It is derived from the flesh and the kernel of the fruit of the oil palm tree. The leaves of oil palm tree can gain a height of around 20 meters. The fruits of this tree are bigger than plums in size, reddish in colour and have a single seeded kernel inside. The oil palm tree is native to the areas of coastal Africa and appears different from a coconut palm tree. Crude Palm Oil (CPO) is one of the most important edible oils in India.

According to, the Indonesian Palm Oil Association, commonly known as Gapki, shipments of palm and kernel oils to India climbed 32% to record 7.6 million metric tons in 2017 from a year earlier. So, what is the performance of crude palm oil trading in India during all months of 2017? Here are India import statistics of palm oil during January to December 2017. 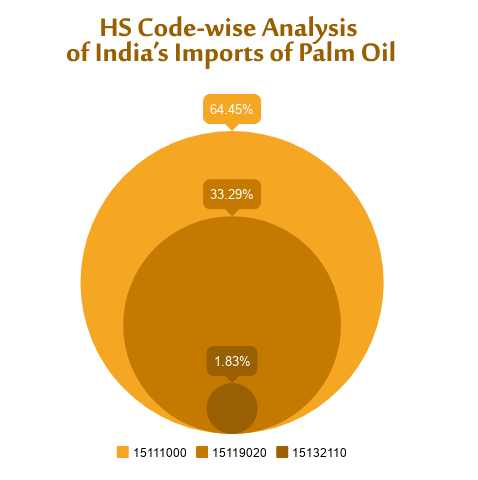 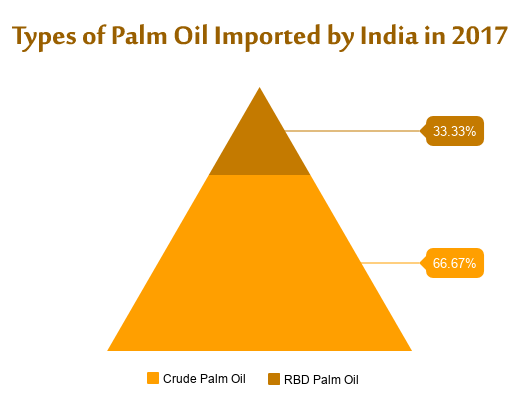 Malaysian palm oil exports are likely to fall in 2018, after India raised its import duties to the highest in a decade. India lifted the import tax on crude palm oil to 30% from 15% and increased import tax duty on refined palm oil imports to 40% from 25%. India, which relies on imports to meet about 70% of its total vegetable oil requirements,

Why India increased import duty on palm oil? The primary objective is to make the prices of soyabean and groundnut above the minimum support price. The second objective of the move is to offset the export duty imposed by palm oil exporting countries especially Indonesia and Malaysia. Here are 3 largest palm oil import partners of India with trade figures recorded in 2017. 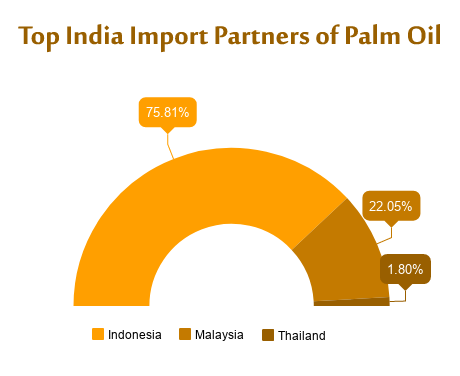 According to Export Genius report on palm oil industry in India, the highest shipments of palm oil arrived at India’s Kandla Sea Port during 2017. Total 3534320 MTS of palm oil arrived at this port, which shared 26.31% among total ports of India. Also, get port codes of India here. It was followed by Krishnapatnam Sea Port and Kolkata Sea Port with 16.26% and 14.91% share in value respectively. Here is the list of 10 largest Indian ports were palm oil shipments arrived during 2017. 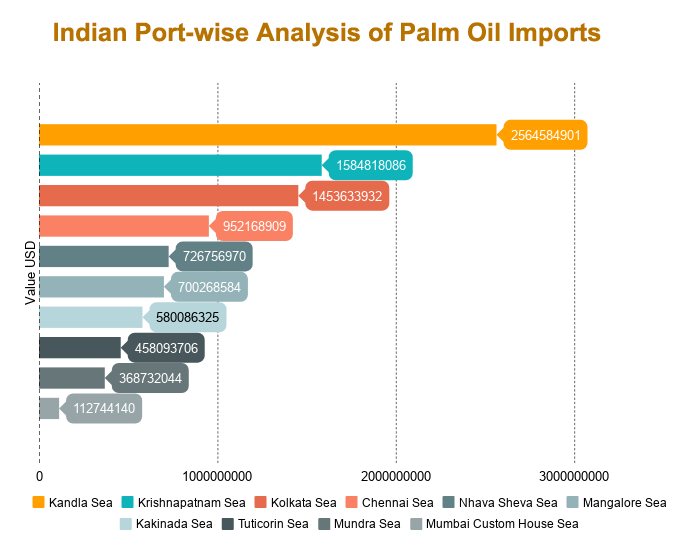 Through India import sample of palm oil given below, you can check out the columns that are covered in palm oil import data of India.

For Indian Buyers of Palm Oil: From getting the list of palm oil importers in India, analyse the competition level in the market and take business decisions as per the need. They can also find new and active foreign exporters of palm oil in the world, especially in Indonesia and Malaysia who are the largest exporter countries of palm oil.

For Foreign Suppliers of Palm Oil: Foreign suppliers of palm oil in Indonesia and Malaysia can locate trusted importers of palm in India to boost their business.

For Banks: By having details of companies importing & exporting palm oil, banks can approach them for having benefits of their financial services.

For Logistics Companies: Logistics companies can find new customers by knowing which Indian port welcomes the shipments of palm oil from other countries.

For Market Research Agencies: Last but not least, market research companies can use our analysis report and shipment details of India import palm oil to come up with more and better findings.

Also, read Palm Oil Export and Import in the World.