India’s onion exports in 2018 valued US$ 408.8 million, which fell slightly from the previous year. Major buyers of Indian onions are Malaysia, Sri Lanka, Bangladesh, United Arab Emirates, Nepal, Qatar, Philippines, Kuwait, Indonesia and Oman. According to India export data, Maharashtra is the largest onion growing state. Since September this year, price of onions is at peak level due to extended monsoon season which caused delayed harvests and supplies shriveled. Not only India, price of onions is also high in neighboring countries like Bangladesh and Sri Lanka due to onion export ban by India. In order to control the rising prices of onions, Indian government has approved the proposal of importing 1.2 lakh tonnes of onions. Let’s put some light on India’s onion export market with India export statistics.

India is the world’s second largest onion growing country. The major onion producing states are Maharashtra, Madhya Pradesh, Karnataka, Bihar, Gujarat, Rajasthan, Andhra Pradesh, Telangana and Haryana. Maharashtra ranks first in onion production with a share of 28.32%. Indian onions are famous for their pungency and are available throughout the year. There are two crop cycles, first harvesting of onions start in November to January and the second harvesting start from January to May.

According to India trade statistics of onion exports, total shipments of onions valued US$ 138.4 million were departed from the country from January to April 2019. The highest number of onion shipments was released from Indian ports in March and April months. 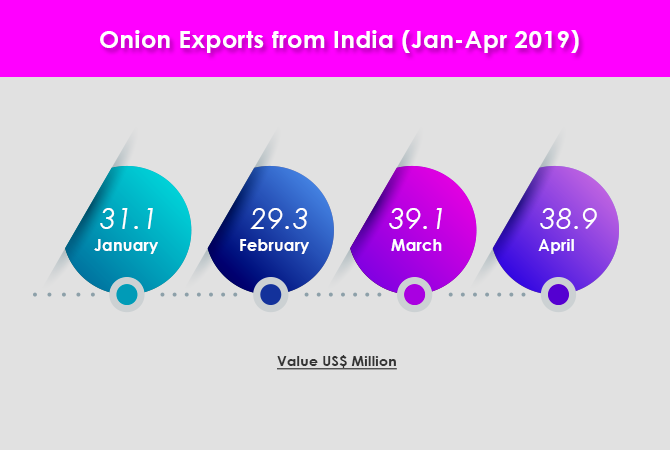 If we see India’s export performance of onions in the last 5 years, we found that total value of onions exported from the country has been rising since 2014, except 2016 when it fell marginally. 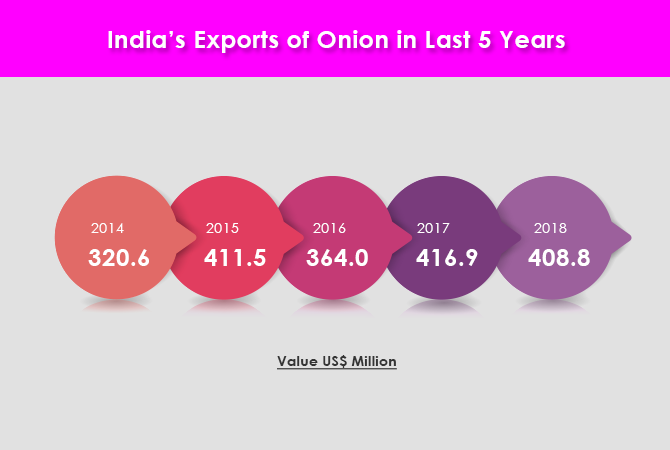 According to India customs data, onion suppliers of India exported onions mostly to fellow Asian countries. The largest importer of Indian onions in 2018 was Malaysia, followed by Sri Lanka and Bangladesh. The following chart and table shows percentage share of top 10 export destination of Indian onions. 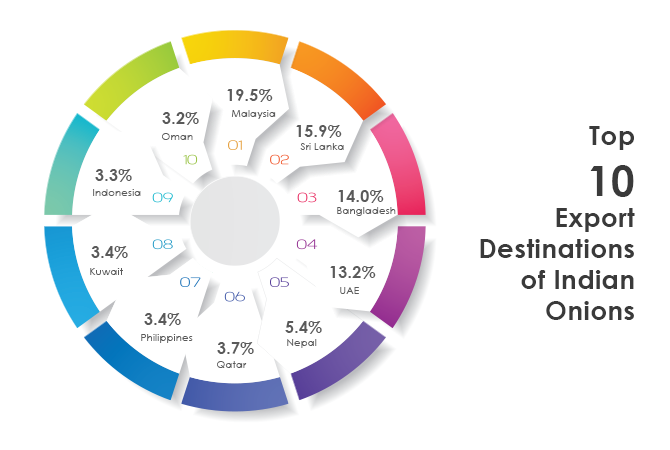 So, whether you are planning to export onions from India or buy onions from India, finding the best prospects is somewhat difficult and time-taken. With the help of our India shipment data of onions, you can find genuine Indian exporters of onions and their foreign buyers with detailed shipment records. Check sample of India exports onions and access complete columns.

****Hidden Columns Available Only On Purchase

Why Price of Onions is High in India?

A sharp increase in prices of onions was resulted due to extended monsoon downpours delayed harvests and supplies shrivelled. Onion prices have come under pressure due to 26% fall in the production to 52.06 lakh tonnes during the kharif output late-kharif seasons of 2019-20. Despite the export ban enacted in September to increase the domestic supply inside India, prices have surged after rain and floods during October and November limited onion supply, especially in Maharashtra, the country’s largest producer.

In order to control the rising prices of onions, Indian Cabinet approved the recent decision of the Food Ministry to import 1.2 lakh tonnes of onions. The government has also relaxed phytosanitary and fumigation norms till December this year. Besides this, the government has also taken several other measures including stock limits on traders and sale of the commodity stored as buffer at a subsidized rate.

Impact of Onion Export Ban in India to Other Asian Countries

From Colombo to Kathmandu, it’s a kitchen nightmare – Onion prices have gone crazy.

This is because India, the world’s largest seller of onions to Asian countries, has banned exports of onions to control rising prices. A sharp increase in prices of onions was resulted due to extended monsoon downpours delayed harvests and supplies shriveled. Whether it’s Indian sambhar, Bangladeshi biryani or Pakistani chicken curry, Asian consumers have developed a serious dependence on Indian onion suppliers for go-to dishes.

According to India’s Agricultural and Processed Food Products Export Development Authority, India exported 2.2 million tonnes of fresh onions in 2018. In Bangladesh, price of onions is around 120 taka ($1.42) per kilogram. Sri Lankan consumers are asked to pay around 280-300 Sri Lankan rupees ($1.7) per kilogram.

As per Mumbai-based Onion Exporters’ Association, even though India has been importing onions from Egypt in an effort to calm prices, but there won’t be any meaningful drop in prices before summer-sown crops start to hit the market.