U.S. millet exports in 2019 totaled USD 41.9 million, a sharp rise as compared to the previous year. In 2018, value of millet exports from the United States was USD 23.3 million. That dollar amount has witnessed an increase from the last three consecutive years. According to US export data millets, the United States shipped millets the most to Indonesia, which shared more than 50% value to total exports. Here is an overall perspective millet export market in the US with U.S. export statistics recorded in 2019.

According to U.S. customs data, the United States recorded a rise in the value of millet exports for the third consecutive year in 2019. In 2017, millet exports from the US valued USD 14.6 million, which rose to USD 23.3 million in 2018 and further increased to USD 41.9 million in 2019. Below give chart and table shows dollar amount of exports of millet from U.S. recorded in the last five years. 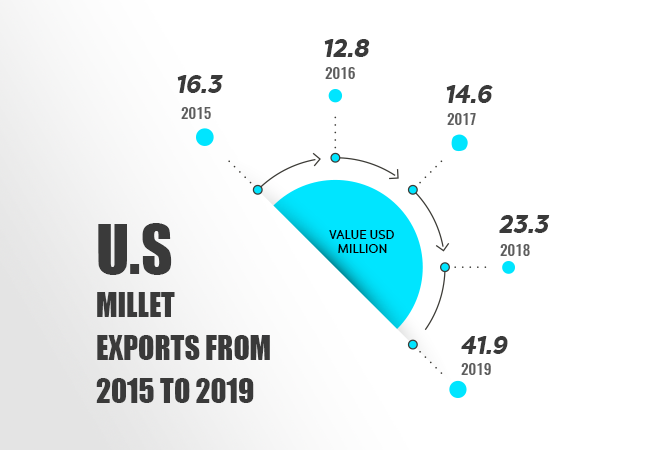 Indonesia, the largest export partner of the United States for the product millet, shared 58.1% to total export value. Another 14.4% worth of millets were shipped from the United States to Canada. And top 10 US millet export partners accounted for 90.1% to overall value of millet export shipments. Below given chart and table shows percentage share of US top 10 export destinations of millets recorded in 2019. 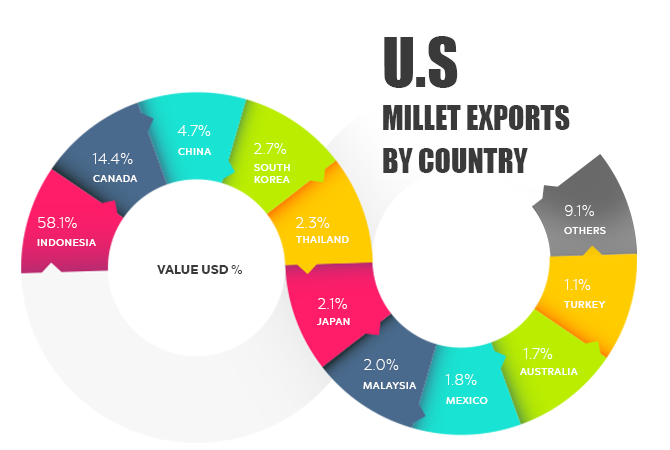 Millet Products in the United States

Millet production in the United States amounted to approx. 350K tonnes in 2019 and approx. 326K tonnes in 2018. From 2014 to 2019, the total output volume rose at an average annual rate of +1.6%, which was largely conditioned by a slight expansion of the harvested area and a perceptible increase in yield figures.

Driven by increasing demand for millet in the United States, the market is expected to continue an upward consumption trend over the next decade. Know the latest market performance of US millet and get U.S. export data of millet with the comprehensive coverage and shipment records right here.