Mexico imported US$ 420369 million worth of goods from the countries around the world in 2017, which increased from 2016’s US$ 387064 million. A market research report on Mexico’s top imports 2017, which is released by Export Genius, shows that since 2013, the value of country’s total imports rose by 10.3% in 2017 and up by 8.6% from 2016 to 2017. What does Mexico import maximum? Well, it is electrical machinery & equipment of Chapter 85, which shared 20.43% value to country’s total imports. Here is an overview of Mexico’s imports in the last 5 years and top 10 import products of Mexico with import statistics of Mexico recorded in 2017.

According to Mexico import statistics, since 2013, country’s import value of total products has been increasing, which settled at US$ 420369 million in 2017. Let’s analyse Mexico imports from the trade figures recorded in the last 5 years. 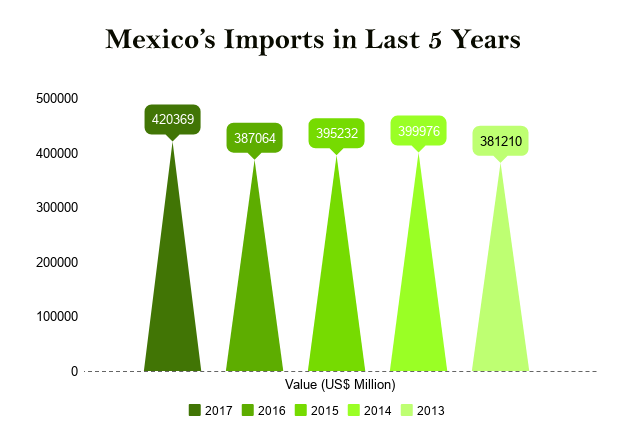 Mexico imports electrical machinery & equipment the most, which accounted 20.43% value to total imports. From Mexico trade statistics based on customs details, it is found that the country imported US$ 85865 worth of electrical machinery & equipment in 2017. Among top imports of Mexico, machinery, mechanical appliances, nuclear reactors, boilers, etc. of Chapter 84 stood at 2nd position in the said year. Let’s quickly have a detailed analysis of 10 largest import products of Mexico with their trade figures recorded in 2017. 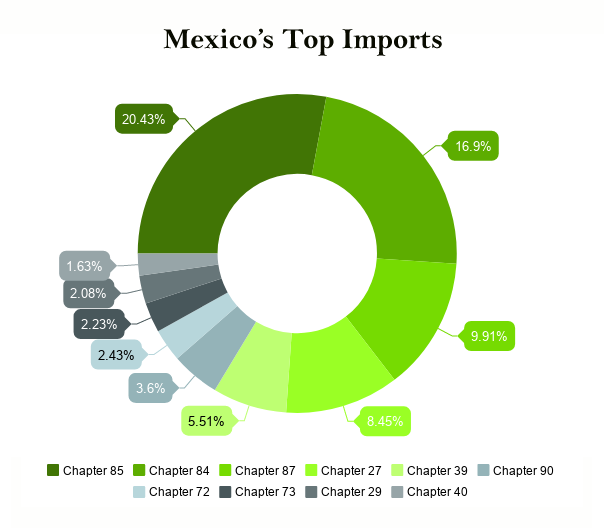 From a continental perspective, almost half (48.7%) of Mexico’s total imports by value in 2017 were purchased from the United States of America through North American Free Trade Agreement (NAFTA). USA is among the top Mexico trading partners. According to shipment data of Mexico, Asian trade partners accounted for 35.1% of Mexican import purchases, while 12.5% worth of goods originated from Europe. And smaller percentages of 0.3% and 3.1% were recorded from Africa and Latin America plus the Caribbean respectively.

Mexico customs data reveals that the country imported goods maximum from the United States of America in 2017. It purchased US$ 194959 worth of products from the US, which shared 46.4% value to Mexico’s total imports. China, Japan, Germany and Republic of Korea stood as 2nd, 3rd, 4th and 5th largest import partners of Mexico respectively. 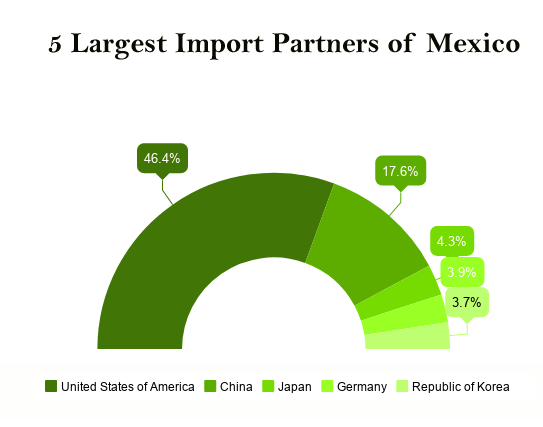 MexicoImporter.com, which is associated to Export Genius, is the best and trusted destination to buy Mexico import data with 100% accurate shipping details. MexicoImporter.com has been designed exclusively for business people who are looking for Mexico international trade data only. For other countries data, enquires can be sent to Export Genius, which provides global trade data of 60+ countries and analytical reports of 20+ countries based on product keywords like brand, model, type, category, etc.

As we believe that customer’s satisfaction is our business success, so we give a sample first to our clients before they are willing to buy our import data of Mexico. Here is the Mexico import data sample of HS Code 29054501, which will give a sense of data columns covered in Mexico import customs data.

Our market research products & services include Customs Data, Statistical Data & Analytical Reports of countries around the globe. You get the answers of following questions from our global trade data.

·         Which transport mode is being used to import or export the product?