Mexico’s auto exports to the United States valued US$92.9 billion in 2018 and US$ 115.5 billion to the world. According to Mexico export data, the country supplied motor cars and other motor vehicles designed for transport of persons the most to the USA in the given year. The United States shared 80.5% value to total vehicle exports from Mexico. Since last year, there has been a tremendous growth in auto exports from Mexico to the US. And one of the major reasons for this growth is trade war between the US and China, which began in early last year after both the countries hiked tariffs on some products imported from each other. This benefited Mexico to become the largest trade partner of the U.S., leaving China behind so far this year. Let’s have a wider perspective on Mexico auto exports to the US from Mexico trade statistics.

As per Mexico export statistics of vehicles, shipments from Mexican auto plants to the United States totalled US$92.9 million vehicles in 2018, up from the previous year. The reason behind this trend is America’s growing appetite for pickups, SUVs and crossover utility vehicles. Those bigger vehicles now make up over 60% of the auto sales in the United States and many of the most popular models are built south of the border. Have a look at top 5 auto commodities which are supplied by Mexico to the US. 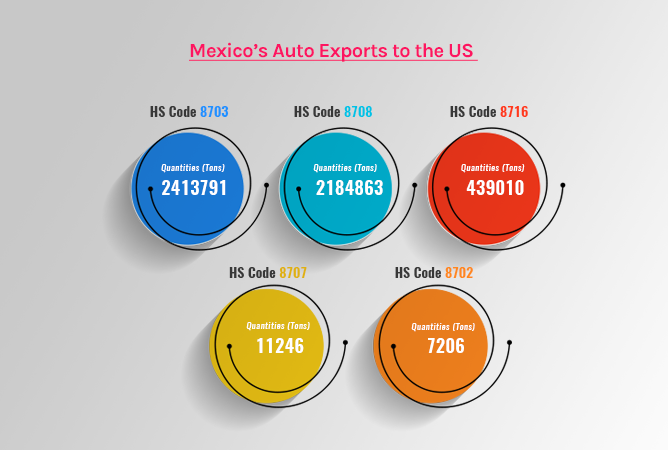 Vehicle Exports from Mexico to the World in 2018

Mexico’s exports of auto products to the world valued US$115.5 billion in 2018. From country perspective, Mexico supplied parts & accessories for tractors & motor vehicles for transporting of ten or more persons the most in the given year. Here is the list of top 5 vehicle goods which were exported maximum by Mexico to global countries. 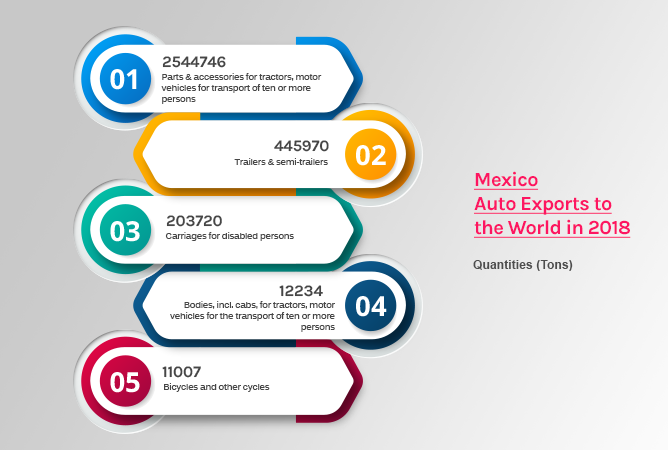 Mexico Vehicle Exports to the US in Past Years – Annual % Change

If we see Mexico exports of vehicles to the United States in the last seven years, we found that after registering 10.1% percentage change in auto exports to the US in 2011, Mexico recorded a decline in 2012. Then again the value of total vehicle exports to the USA increased in 2013. However, vehicle exports from Mexico to the United States fell drastically in 2014 and 2015. The figures again increased in year 2016, 2017 and 2018. 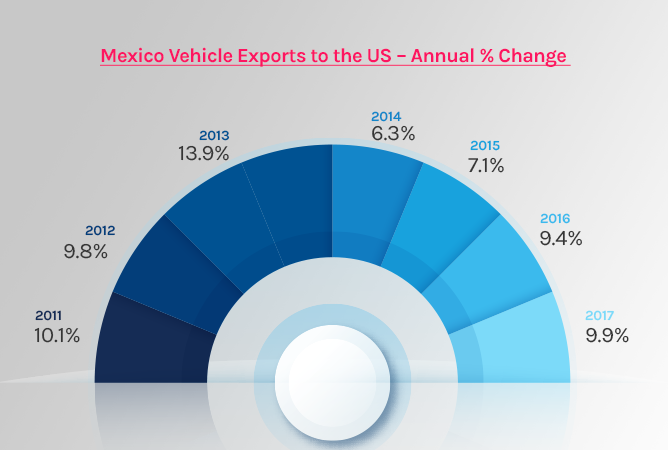 Mexico customs data reveal surprising fact that the United States of America is the largest export destination of Mexico auto commodities. It shared huge 80.5% value to total Mexico vehicle exports in 2018. Check the list of top 5 Mexico’s auto partners with their percentage share. 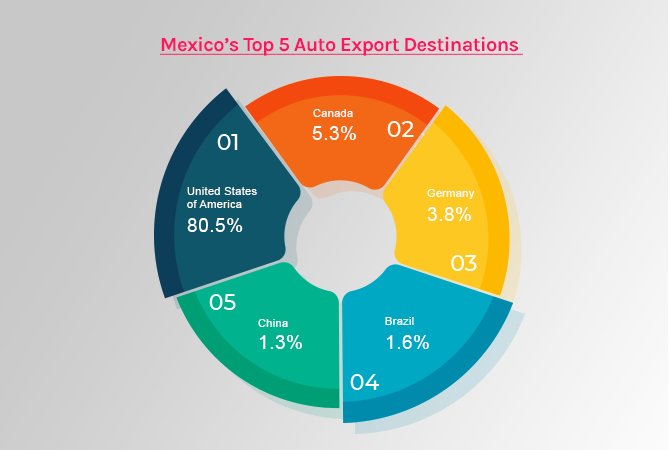 So, if you are planning to export vehicles and other auto products from Mexico to the United States or any other country, our Mexico export data will give you a larger picture of auto industry with the most up-to-date shipment details. Or if you want to import vehicles from Mexico into the US, our data will help you making the correct business decisions. Look at a sample of Mexico auto exports to the US and understand the fields covered in data.

Mexico Auto Exports to the US (Sample)

Why Mexico is so important to the American auto industry?

Building a car in the United States of America and purchasing one, could get a lot more expensive, as President Donald Trump has threatened to impose tariffs on Mexican imports of up to 25% by October. The tariffs could raise costs in the United States by tens of billions of dollars in the auto industry alone. According to the reports, the tariffs on vehicles would undoubtedly be passed on to consumers.

As per Mexico shipment data of vehicles, about 16% of all auto parts used by US assembly plants come from Mexico. Automakers can’t easily shift to other suppliers to avoid using parts from Mexico. The US Commerce Department data shows that Mexico bought 140,600 cars from the United States last year, about 8% of all car exports, making it the fourth largest market behind Canada, China and Germany.