Asia’s maize imports increased by 7.7% to 77M tonnes in 2019, rising for the second consecutive years of decline. The value of total maize shipments entered into Asian countries recorded USD 15,553 million. As per latest Asian countries trade data of maize available with us shows that Japan made the highest purchases of maize in Asia from other countries in the world. Both in terms of production and consumption of maize, China stood at the top position in 2019. Here is a clear picture of Asian import market of maize with in-depth analysis of Asia import statistics of maize.

If we look at import value of maize recorded by Asian countries during last 10 years, we found that the highest number of maize shipments entered into Asia in year 2012, while the lowest figures recorded in 2010. In 2019, Asian nations imported maize worth USD 15,553 million. Below given chart and table shows dollar amount of maize import shipments recorded by Asian countries during last ten years. 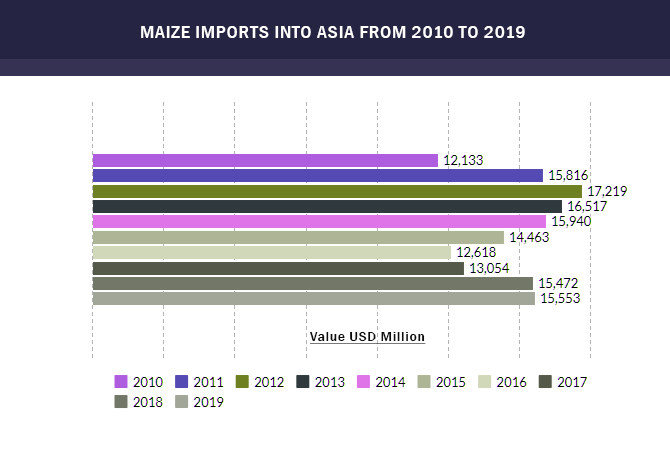 As per Asia customs data, Japan stood at top position in Asia in terms of maize imported in 2019. The country imported 15,986,053 tons of maize worth USD 3,524 million in the said year. Other largest maize importer countries in Asian continent were South Korea, Vietnam, Taipei, China, Malaysia and Turkey. Below given chart and table shows dollar amount and quantity of maize imported by top 10 Asian countries in 2019. 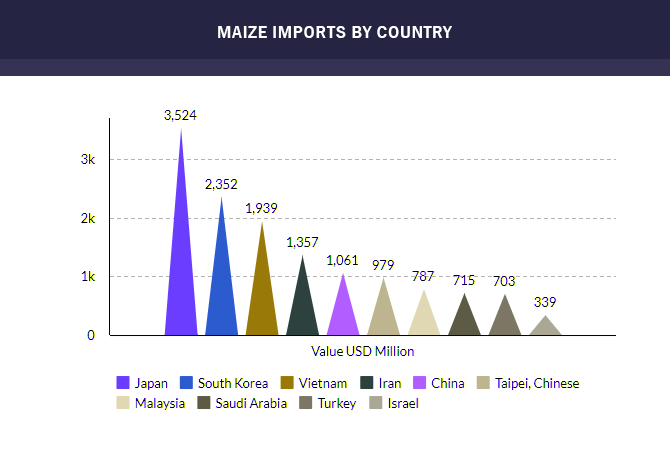 China recorded the largest volume of maize production of 270M tonnes in 2019, accounting for 71% of total volume. Indonesia with 33M tonnes and India with 29M tonnes stood at second and third place respectively in terms of maize production in Asian continent.

Amid concerns about the impact of Covid-19 on grain supplies, the Chinese government has taken a number of measures to preserve the area sown with corn, which canceled previous measures. As a result, product of maize in the country is projected at 260-265 million tonnes. Talking about India, after record yields in 2019, a slight decrease in maize production is expected in year 2020 due to coronavirus pandemic, which is currently projected at 28.0 million tonnes.

After two years of decline, Asian maize market was finally on the rise in 2019. China stood at the largest producer and consumer country of maize in Asian continent. In terms of imports, Japan imported maize the most in the said year. Get latest maize import data with shipment details right here.