An estimated value of world’s total imports recorded USD 19.06 trillion in 2019. That dollar amount reflects a decline of about -4.1% as compared to the previous year. The United States of America stood as the largest importer country in the world, which shared 13.5% value to total imports recorded last year. China was the second largest country in terms of global imports, which shared 10.9% value to total imports. As per global trade data, electrical machinery & equipment at 2-digit level Harmonized System was the largest imported product in the world. Below, you will find the top 20 import countries with their dollar values recorded in 2019. 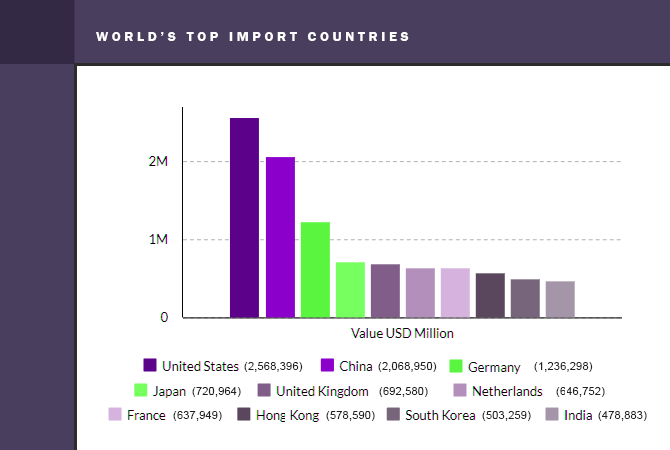 Import and export are generally important pillars of a country’s economy. A country which has abundant production of a product, supply that product to world countries. And a country which has shortage of a product, import that product from global countries. The trade balance of a country shows the relationship between the values of a country’s imports and exports. If the balance is positive, that means the country has higher exports than imports. It is called trade surplus. And if it is a negative and import value exceed export values, it represents a trade deficit.

Worldwide trade is regulated by the World Trade Organization (WTO). It provides a framework for trade agreements and helps in resolving disputes. Since the organization was founded in 1995, more than 150 countries have become members of WTO and are obliged themselves in following its regulations.

The year 2020 is uncertain for global countries in terms of imports due to ongoing fight against the deadly coronavirus pandemic. This virus has affected millions of people worldwide and impacted global economy severely. Since January to April, most of the countries went on total lockdown in a phased manner, which resulted shutdown down of industries and stoppage in movement of goods across international borders. Get all updates on global trade and import statistics right here.