Letter of Credit in International Trade – A Detailed Overview

In an import-export business, Letter of Credit (LC), also known as Documentary Credit, is a major instrument for settling trade payments. It is actually a written commitment from a bank on behalf of a buyer (importer) that payment has been made to a seller (exporter) under agreed terms & conditions. A key principle of LC is that banks have to deal only in documents and not in goods. It is prohibitive for banks to physically examine whether all products have been shipped exactly as per Letter of Credit. LC is defined by the International Chamber of Commerce (ICC) in Article 2 of the Uniform Custom and Practice for Documentary Credit (UCPDC), ICC Brochure 600 as –

“Any arrangement, however named or described, that is irrevocable and thereby constitutes a definite undertaking of the issuing bank to honour a complying presentation.”

How Letter of Credit (LC) Works?

The existing advantages of LC based transactions have contributed to a large extent to the growth of international trade in modern times. The working of LC involves parties to commercial Letter of Credit and steps in the process of LC that is discussed below.

Parties to Letter of Credit

1. Applicant (Opener): An Applicant is a buyer (importer) of the goods, who has to make payments to the beneficiary.

3. Beneficiary: Beneficiary is normally a seller (supplier, exporter) of merchandise who has to receive payment from the Applicant (importer).

7. Reimbursing Bank: Reimbursing Bank is authorized to honour the reimbursement claim in settlement of negotiation/acceptance/payment lodged with it by the Negotiating Bank.

Steps involved in the Process of Letter of Credit 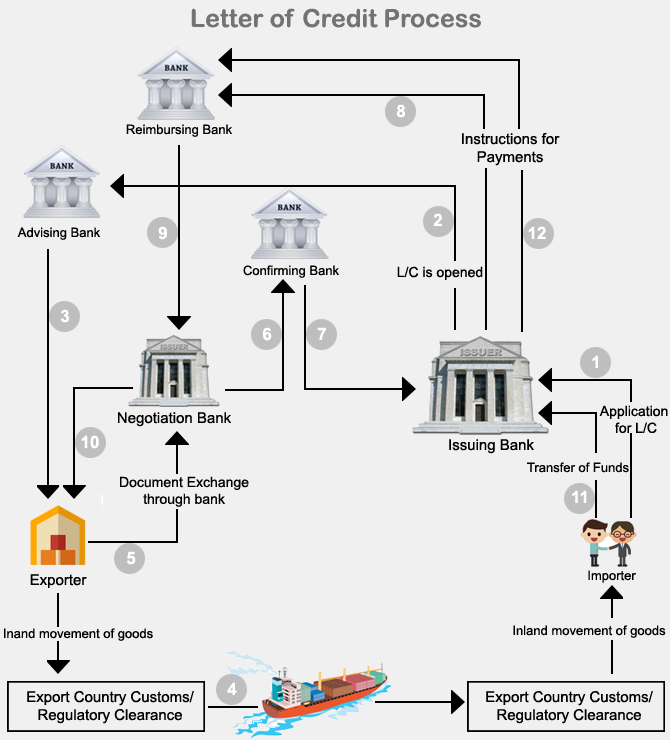 The importer and exporter agree on the sale terms and come into the contract encompassing the type of products, delivery schedule, mode of payment etc. After this, buyer arranges for his bank (Issuing Bank) to open a Letter of Credit in favour of the seller. The buyer’s bank is liable to prepare the issuing letter of credit as per buyer’s instructions to the supplier and required Letter of Credit documents including – Bill of Lading, Commercial Invoice, Transport Document such as Bill of Lading, Airway Bill, etc., Insurance Document, Inspection Certificate, Certificate of Origin and any other document as per the sale contract.

Documents are mainly required for customs clearance and reflecting the agreement reached between importer and exporter and these should be prepared in the language of LC or the language specified in the LC. For example, banks in France open LCs in English, however the country often specify certain shipping documents to be prepared in French language.

The buyer’s bank transfers the letter of credit to the advising bank in the seller’s country.

After checking authenticity of the letter of credit, the advising bank forwards it to the exporter. The seller now reviews the terms & conditions mentioned in LC and notify any required amendment to the buyer.

Once terms & conditions of trade are finalised and agreed, the seller makes merchandise ready for shipment to the appropriate destination. The seller obtains required transport documents like Bill of Lading, while shipping the goods.

Once Issuing Bank receives all documents, importer has to make the payment to bank and will receive the documents, which will make him to take the shipment into possession.

Types of Letter of Credit

Irrevocable Letter of Credit: This type of LC can’t be amended or cancelled by the Issuing Bank without the consent of parties to LC, particularly the Beneficiary. It is more favourable as per exporter’s point of view.

Confirmed Letter of Credit: This LC is issued after guarantee or confirmation by another bank other than Issuing Bank. Thus, there is a double guarantee to this credit and it is more favourable to the Beneficiary. This type of LC is costlier as there are charges to be paid to the Confirming Bank.

Sight Credit & Usance Credit: in the Sight Letter of Credit, Issuing Bank has to made payment at the sight, on demand or on presentation. Whereas, in Usance Credit, drafts are drawn on the issuing bank or the correspondent bank at specified Usance period.

Back-to-Back Letter of Credit is a main type of letter of credit in which LC opens against the security of another LC with corresponding terms. It is also called as Countervailing Credit. The original credit, offered as security for opening back-to-back credit is called as Overriding Credit or Principal Credit. Practically speaking, this credit is used when LC is opened by the ultimate importer in favour of a particular beneficiary, who may not be the actual exporter or manufacturer. It is not safe as transferable credit from the banker’s point of view.

Back-to-Back Letter of Credit is mainly needed when: (a) The ultimate importer is not prepared to open transferable credit. (b) The beneficiary is not willing to disclose the source of supply to the openers. (c) Actual manufacturers/exporters insist on payment against documents for products but the beneficiary of credit is short of funds.

How Import Operations Take Place under LC in India?

Banks in India usually open Import Letters of Credit under the following conditions, in which the first category is the most common in the day-to-day banking operations:

1. When an Indian resident is importing merchandise into India.

2. In the case of merchandising trade, when a resident merchant trader is buying products from one country and selling to another country.

3. When an Indian supplier executing a contract abroad, requires importing products from a third country to the country where contract is executed.

Risk Associated with Opening of Import Letters of Credit

Importer’s Financial Stand: In LC, the Issuing Bank primarily guarantees to make the payment on behalf of the buyer on fulfilment of certain conditions. So, the bank has to see that buyer must issue the import bill drawn under LC and should be sure that the buyer latter has or will have funds to pay.

Merchandise: The risks are also associated with perishability of goods, possible obsolescence, import regulations, packaging & storage, etc. There is also a price risk associated with products like aluminium whose global prices can fluctuate substantially. This kind of risk is linked with all transportation modes of international trade and may affect the buyer’s ability to pay for his shipment.

Exporter’s or Beneficiary’s Status: An errant supplier could ship sub-standard merchandise. This risk can be avoided by finding much about exporter through status reports and other confidential reports from banks & credit rating agencies.

Country Risk: This type of risk involves factors including political & economic stability of a country, exchange controls, if any, protection of domestic industry at short notice, etc. This is more relevant for sellers rather than buyers of products.

Foreign Exchange Risk: Payments and receipts in foreign currency are day-to-day occurrence in foreign trade. Traders are always at the mercy of exchange rate fluctuations due to various political, economic and purely speculative reasons. An unfavourable movement in the transaction currency can wipe out the entire profit and more of the deal.

The Letter of Credit provides a relatively risk-free environment to both importers and exporters. Their advantages and disadvantages are compared as under: 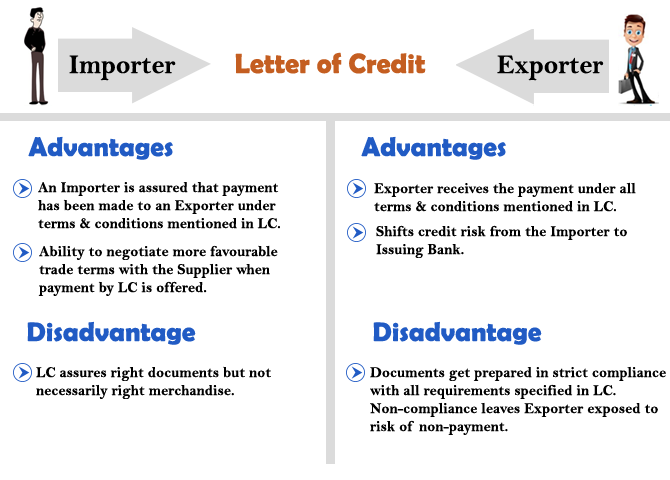 How Export Operations Take Place under LC in India?

1. For goods & services physically from India to foreign country.

3. For deemed exports, where no physical movement of goods is there, but exporters make their project financed in foreign exchange by multilateral agencies.

4. For sale of products by Indian exporters with complete procurement and supply from outside India.

So, Letter of Credit is mandatory in the process of buying and selling between two countries. It is useful for both importers and exporters around the world.

If you want to know biggest buyers or suppliers of your product, simply check global trade data at Export Genius.