Relaxing, having chat, working on laptop or simply recharging mood with a cup of coffee has become an essential part of Japanese people. But coffee in Japan is imported from other countries. According to Vietnam Trades data and market research report, Brazil is the largest source of coffee imports for Japan, followed by Vietnam. In recent times, Japan is importing coffee more from Vietnam, which is cutting the market share of Brazil. Let’s have a bigger view on this trade development with Japan import statistics of Coffee, Vietnam coffee export statistics, Brazil export statistics of coffee, Japan import data, Vietnam export data and Brazil export data.

Japan’s largest source of coffee is Brazil, followed by Vietnam and Colombia. However, in the last 5 years, it has been observed that Brazil’s coffee exports to Japan is decreasing, while Vietnam’s coffee exports to Japan is increasing. According to coffee trade data, Japan’s coffee imports from Brazil valued at US$ 1262 million and from Vietnam valued at US$ 217 million in 2018. Colombia supplied coffee worth US$ 328 million to Japan in the said year.

Japan’s main source of coffee is Brazil, followed by Vietnam. But Vietnam is giving a tough competition to Brazil as major coffee trade partner of Japan. If we see the past records, since 2014, Japan imports of Brazilian coffee has been declining, while Japan imports of Vietnamese coffee has been rising. In 2018, Brazil supplied 112416 tons of coffee to Japan, lower than 118283 tons that of 2017. And Vietnam exported 98694 tons of coffee to Japan in 2018, up from 2017’s 88610 tons. 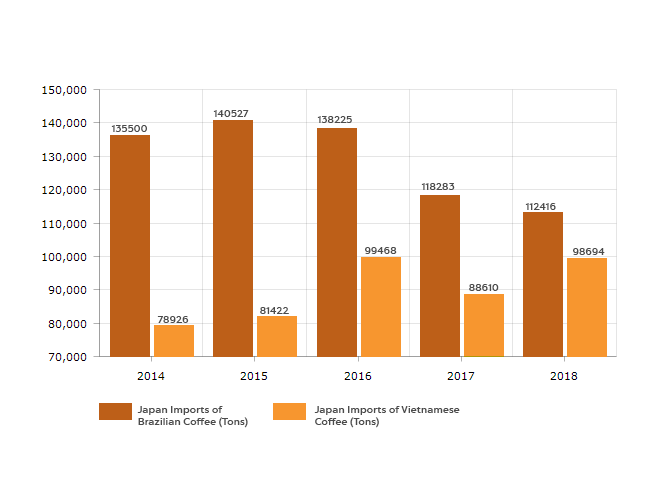 Japan is among the 10 largest import countries in the world. It stood at 6th position in 2018 with value of US$ 1.26 billion or about 4.1% of total imports. Top 5 importer countries of coffee are the United States, Germany, France, Italy and Netherlands. Japan purchased about 408310 tons of coffee from global countries in 2018, which declined from the previous year’s value of 414075 tons. 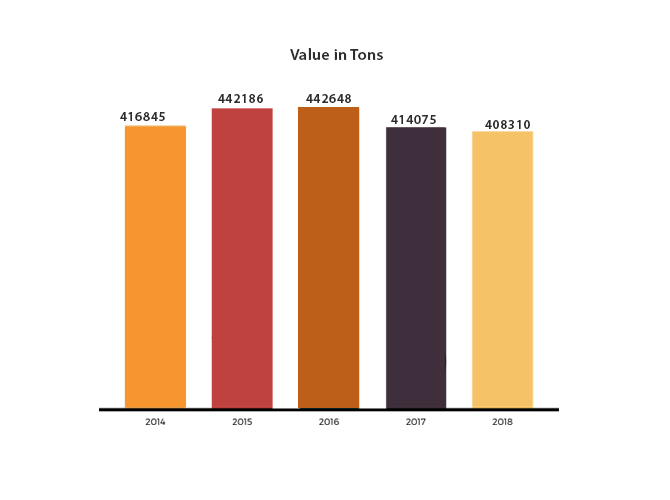 Japan Coffee Imports by Country in 2018

Our coffee import statistics of Japan and business intelligence report shows that Brazil is the world’s largest producer of coffee. The country’s Arabica beans grown in the highlands are known for their high quality and balance between bitterness & acidity. According to Vietnam export data, the main type of coffee grown in Vietnam is Robusta, which is bitterer than Arabica. Since Robusta coffee is slightly lower in quality, while also easier to cultivate, it sells around 30% less than Arabica. For this reason, Robusta is often used to make instant coffee, coffee export data reveals.

In recent years, the proportion of coffee beans imported from Brazil has been on the decline due to increasing imports of Vietnamese coffee. One main reason for this is the growing demand of a rise in single-serving “stick-type” instant coffee.

Take a look at top 10 coffee import sources of Japan with their quantity imported in 2018. 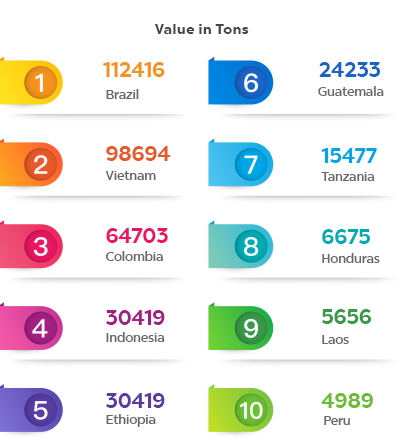 Are you planning to import coffee into Japan? Our Japan import data of coffee will help you in finding the best prospects and taking the right business decisions. Look at two samples on Japan coffee imports with Vietnam and Brazil as origin country to get comprehensive information including Japan coffee importers and analyse Japan coffee market.

Japan Import Sample of Coffee with Brazil as Origin Country

In future, Vietnam is most likely to become the largest coffee supplier of Japan, surpassing Brazil. But, these two countries will remain in the top list of Japan coffee imports.