India-Iraq bilateral trade is a good opportunity for many Indian tea companies and exporters as Iraq shows positive signs of commencing trade with the country. Recently, headlines have made highlights about Baghdad’s Chamber of Commerce inviting Indian tea companies to participate in their first ‘Tea Festival’. This has marked a long-decade halt to disruption in both countries’ trade, specifically for tea.

Iraq’s imports with India recorded fluctuations after the year 2013. The year 2020 shows further decreasing values as India exports to Iran accounted for $1.4 billion only, as compared to $2 billion for the year 2019. Want to gain access to such historical data of India’s trade with Iraq? Schedule a demo with us to utilize our trade intelligence platform online to get useful insights.

In specific terms of tea, India used to export around $50 million worth of tea before 2002. According to the sources, there was a good banking system and low-security risk. Post-2002, due to larger security risks, there were fewer exports with no such major changes in imports. India has been one of the largest importers of crude oil from Iraq throughout the previous years. 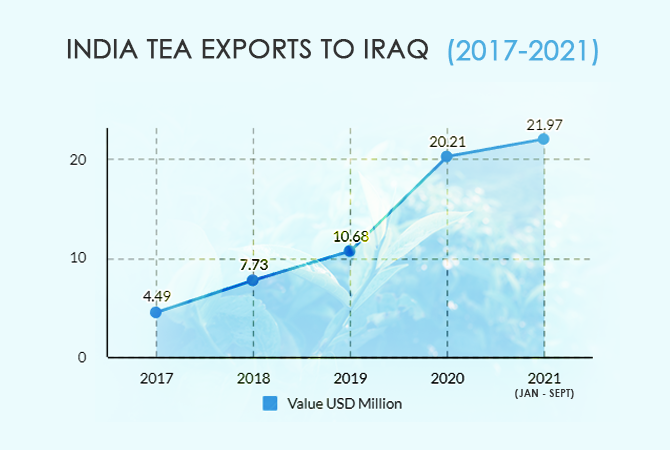 Iraq and India have been in close alliance for trading commodities with a historical significance in the past. Indian commodities such as textiles, spices, food items such as grains, especially pearls have been of really great value for Arab people.

Regarding UN Secretary-General, India’s commitment to providing $20 million as assistance to Iraq in 2003, stands a strong testament to close bilateral relations between both countries. Under this assistance initiative, India shared commodities such as biscuits and milk powder to provide relief to Iraqi people and officials both, along with Iraqi schoolchildren and refugees in Syria. In addition to this, India contributed $10 million to International Reconstruction Fund Facility for Iraq (IRFFI) for investment and development purposes in Iraq.

Although, this period of Iraq’s history marked a checkpoint for decreasing exports of Iraq from India, trade between both countries increased after the 2010s. 2018 marked the highest exports of India to Iraq with an increase of $6 million as compared to the previous period i.e., 2016-17.

Baghdad Chamber of Commerce’s invitation has come along as a ray of hope for Indian tea companies, who produce over 1.4 trillion kg of tea a year, to supply in Iraq and regain its market. Recollecting the historical data of both countries’ trade with major details on the suppliers and buyers in the regions will reveal important information on companies involved in the tea’s trade. Export Genius provides robust coverage on the global trade data through its trade intelligence platform online. Contact our team for more information on the plan and pricing for the platform.