Total trade balance of ASEAN countries amounted to USD 78 billion in 2016, which was trade surplus. ASEAN exports and imports valued at USD 1182 billion and USD 1104 billion respectively. According to a report on ASEAN trade released by Export Genius, Indonesia is the largest importer country and Singapore is the largest exporter country among ASEAN group. If ASEAN were a single entity, it would rank as the 6th largest economy in the world, behind the United States, China, Japan, France and Germany. Let’s have some information about ASEAN and analyse global trade of ASEAN nations – ASEAN trade with India – ASEAN trade with China and ASEAN trade with US. 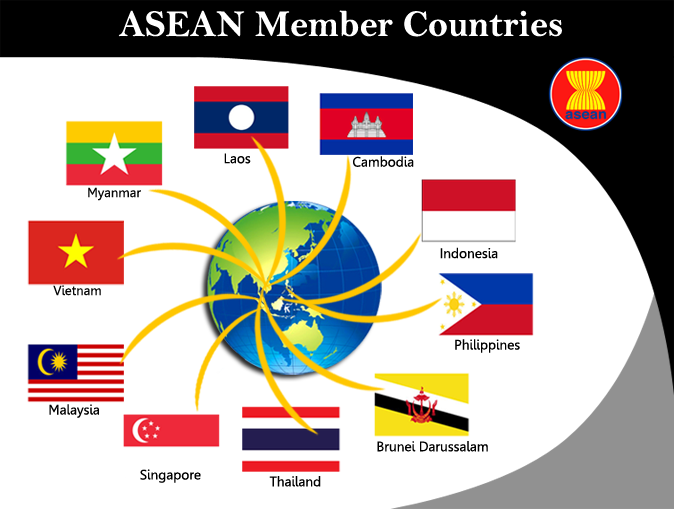 The Association of Southeast Asian Nations (ASEAN) is a regional intergovernmental organization comprising 10 members of Southeast Asia region – Thailand, Vietnam, Indonesia, Philippines, Malaysia, Singapore, Myanmar, Cambodia, Laos and Brunei. The main aim of this association is to promote Pan-Asianism, intergovernmental cooperation and facilities in educational, military, security, political & economic sectors socio-cultural integration among its members and other Asian countries. Headquartered at Jakarta, Indonesia, ASEAN was founded on 8th August 1967 and by Thailand, Singapore, Philippines, Malaysia and Indonesia. At present, the chairman of ASEAN group is Lee Hsien Loong. Till now, 31 summits have been completed, among which the last summit was held between 10 and 14 November 2017 and in Philippines. Singapore will host the next ASEAN summit in April 2018.

ASEAN is built on 3 pillars namely the ASEAN Political-Security Community (APSC), the ASEAN Economic Community (AEC) and the ASEAN Socio-Cultural Community (ASCC). The average economic growth of ASEAN’s member countries was between 3.8% and 7% during 1989-2009. This figure was greater than that of the Asia-Pacific Economic Cooperation (APEC), which was 2.8%. The total trade of ASEAN countries amounted to about USD 1.5 trillion in 2016, which saw a slight dip from the previous year. At USD 516 billion, intra-ASEAN trade constituted 23.1% of ASEAN total trade, followed by China (16.5%), EU-28 (10.4%) and US (9.5%).

According to ASEAN trade statistics 2017 obtained by various sources, most ASEAN nations experienced double digit growth in the first half of 2017. For example, Vietnam recorded a rise of almost 19% in its total exports, while the Philippines recorded an increase of 18%. Myanmar, Indonesia and Malaysia also recorded double digit growth of 17%, 15.3% and 12.9% respectively. Let’s check out the global trade of ASEAN countries from the facts and figures given right below.

As per a report on ASEAN trade statistics 2016, ASEAN imports of all countries in 2016 valued at USD 1104 billion, a slight increase from the previous year and ASEAN exports valued at USD 1182 billion, which also saw an increase from the previous year. Intra ASEAN trade statistics 2017 shows that the 10 largest industries of ASEAN nations are – electrical machinery & equipment, machinery, mineral fuels, vehicles other than railway or tramway, plastics, optical, photographic & medical instrument, natural or cultured pearls & precious stones, animal or vegetable fats & oils, rubber and organic chemicals. Here are intra ASEAN trade statistics of the products that are mostly imported and exported by countries of this group. 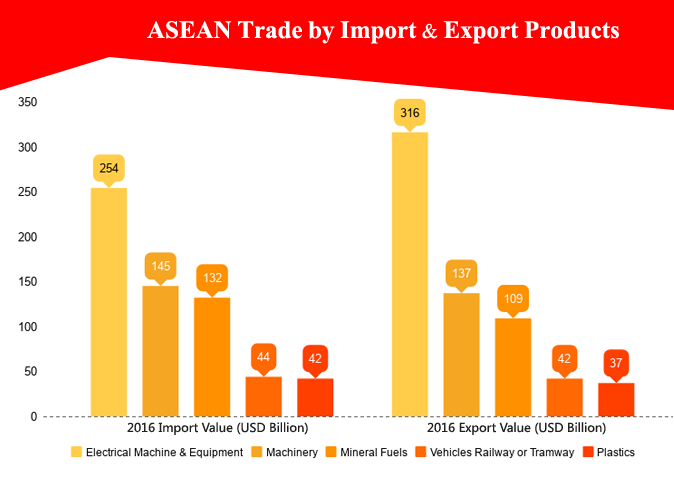 Singapore is the largest importer and exporter country of products among ASEAN nations. It recorded trade surplus in 2016 as its exports were higher than its imports. Singapore’s total imports and exports valued at USD 283 billion and USD 329 billion respectively in the given year. According to a report on intra ASEAN trade 2016, Vietnam and Thailand stood as the 2nd and 3rd biggest buyer and supplier country among this group. Here are import and export statistics of ASEAN top trading partners recorded in 2016. 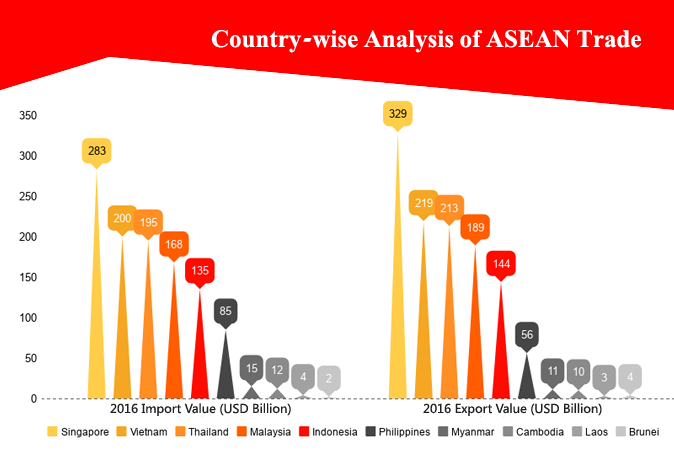 On 26th January 2018, when people of India will celebrate 69th Republic Day, Prime Minister Narendra Modi and his ministers will also be engaged into bilateral trade talks with leaders of 10 Association of Southeast Asian Nations or ASEAN countries. First time in history, India will welcome 10 chief guests on Republic Day. The heads are from Vietnam, Thailand, Malaysia, Indonesia, Singapore, the Philippines, Myanmar, Singapore, Laos, Cambodia and Brunei.

Today, India has about 30 sectoral dialogue mechanisms and 7 ministerial level interactions with ASEAN nations in industries such as defence, external affairs, commerce, connectivity, agriculture, telecommunications, environmental issues, energy and tourism. It also shares bilateral trade relations with each of the 10 ASEAN member countries. Here is a trade scenario of India and ASEAN countries with India ASEAN trade data recorded in year 2016. 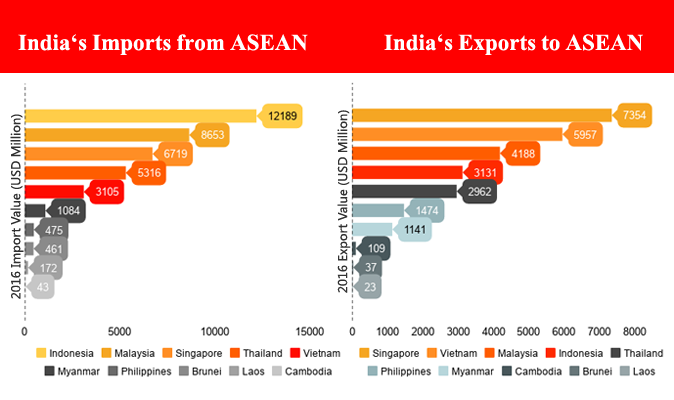 The ASEAN-India Free Trade Area (AIFTA) is a free trade area between ten member countries of ASEAN and India. The initial agreement was signed on 8th October 2003 in Bali, Indonesia, but the final agreement was signed on 13th August 2009. And the free trade area between ASEAN nations and India came into force on 1st January 2010. India hosted the latest ASEAN-India Commemorative Summit in New Delhi between 20th and 21st December 2012.

è What is ASEAN-India Commemorative Summit?

The ASEAN-India Commemorative Summit is an international meeting between India and ASEAN countries. India hosted first meeting to mark the 20th anniversary of the ASEAN-India dialogue and 10 years of its summit level partnership. It was held from 20th to 21st December 2012. Now the country is hosting another ASEAN-India Commemorative Summit to celebrate 25 years of relationship between ASEAN and India, which is scheduled to take place from 25th to 26th January 2018 between ASEAN nations and India. In fact, heads of 10 ASEAN member countries will be the chief guests on the 69th Republic Day of India.

China is the 2nd largest economy in the world and among the top 5 trade partners for ASEAN members. The degree of dependence on China as a source of imports and exports, or both varies as poorer ASEAN nations heavily depend on China, especially in the case of imports. China’s imports from ASEAN countries valued at USD 196 billion in 2016, which rose slightly from 2015’s USD 194 billion. Whereas, China’s exports to ASEAN countries valued at USD 256 billion in 2016, which registered a dip from 2015’s USD 277 billion.

China’s total imports from ASEAN countries amounted to USD 196 billion and its total exports to ASEAN nations amounted to USD 256 billion in year 2016. The country imported products maximum from Malaysia and exported goods mostly to Vietnam in the said year. Let’s have a look on ASEAN China trade statistics. 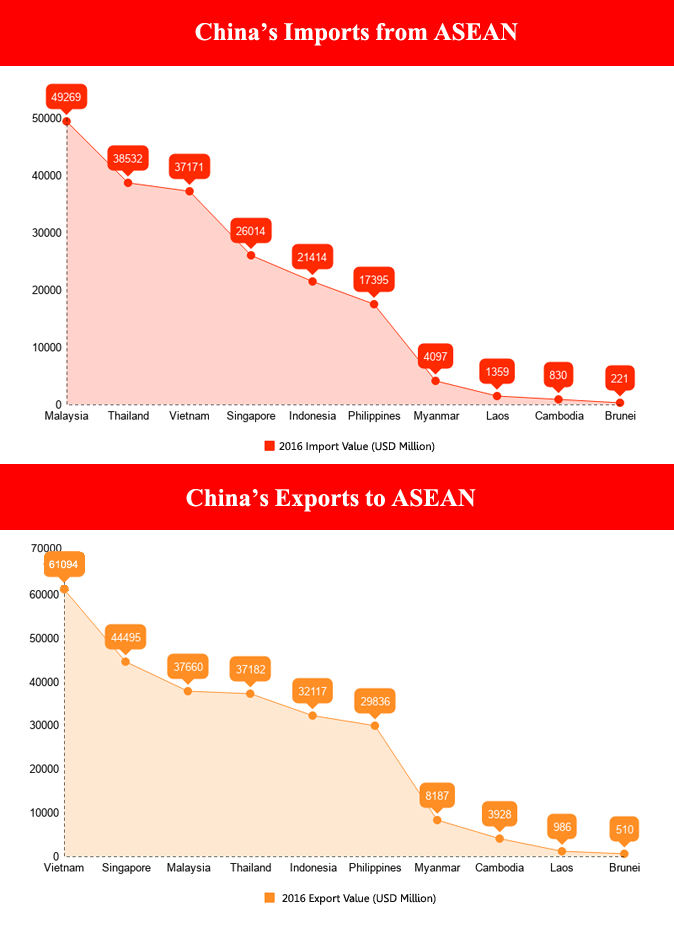 The ASEAN-China Free Trade Area (ACFTA) is a free trade area among the 10 member states of the Association of Southeast Asian Nations (ASEAN) and China. It is also known as China-ASEAN Free Trade Area. This framework agreement was initially signed on 4th November 2002 in Phnom Penh, Cambodia. It came into force on 1st January 2010.

ASEAN Trade with US

Year 2016 was marked as 50 years of official diplomatic ties between the United States of America and Singapore. One of the main reasons on optimistic trade outlook between the two countries is ASEAN Economic Community (AEC), which started in 2016. It seeks to create a single market and production base by freeing the flow of goods and services across ASEAN countries. Singapore offers American companies with a gateway to the world’s largest free trade area. 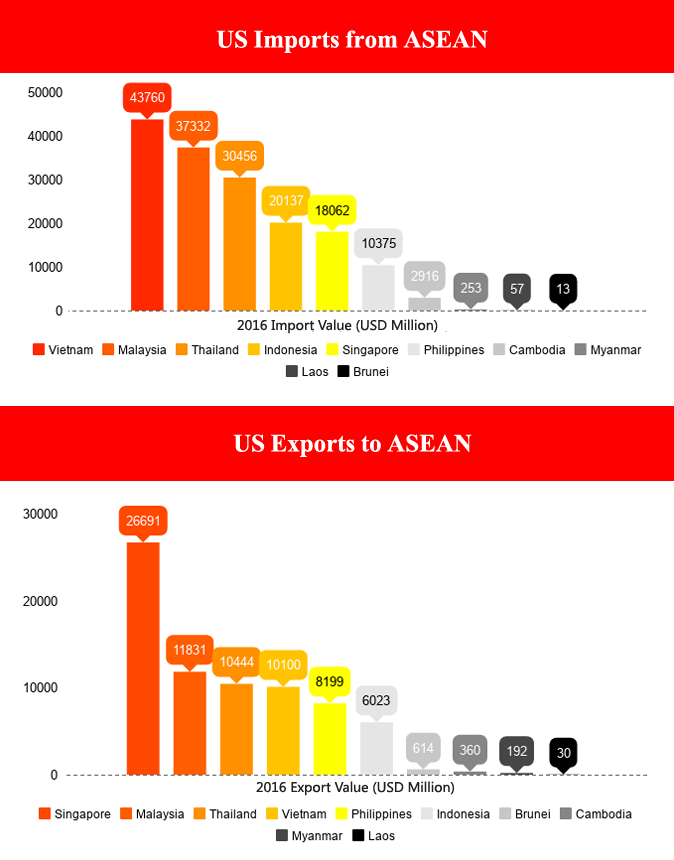 The ASEAN Free Trade Area was established on 28th January 1992 and includes a Common Effective Preferential Tariff (CEPT) to promote the free flow of goods between its member states. At that time, the association had only six members – Brunei, Malaysia, Indonesia, Thailand, Singapore and the Philippines. Vietnam joined ASEAN group in 1995, Laos & Burma joined in 1997 and Cambodia joined in 1999. It is believed that AFTA would boost combined GDP across its member states by more than USD 48 billion till 2020.

At last, it can be concluded that the optimistic macroeconomic outlook in 2018 therefore affords ASEAN with a supportive & facilitative environment to implement its regional integration agenda and to further boost intra-regional trade plus investment. As a result, this would enable ASEAN countries to mitigate the external impact arising from doubts surrounding the worldwide financial and economic landscape.

How to Get Import Export Data of ASEAN Countries?

Our ASEAN trade data will help you in the following ways:

·         Find trusted buyers or suppliers for your products in any part of the world.

·         Analyse price and market size of your product to make the right deal.

·         Find new and potential industries for your business growth.