Retail inflation has increased to a seven-month high of 6.1% in January 2022, 6.07% in February, and 6.95% in March. The rise was mainly on account of high food inflation, which jumped to a 14-month high of 5.43%, along with an unfavourable base. Inflation at the wholesale level in January softened to 12.96% from 13.56% a month ago but marked the tenth consecutive month of being in double digits. WPI increased in February and March months.

According to the Reserve Bank of India (RBI), there are risks of retail inflation becoming more generalized. There are already signs of inflation turning structural in non-food segments like transport, health, and clothing. High global inflation and rising crude oil prices will exert further pressure. The RBI forecasted that CPI inflation will average 5.7% in the first quarter of 2022.

The rise in inflation in January 2022 came about despite the general index of the CPI falling by 0.3% on a month-on-month basis, indicating the presence of an unfavourable base. However, the presence of an unfavourable base effect meant that despite the Consumer Food Price Index falling by 1.3% in January 2022 from December 2021, food inflation shot up to 5.43% from 4.05%.

In an effort to tame food inflation, the Indian government has reduced import duty on lentils and crude palm oil. Import duty on lentils to nil for Australia and Canada origins and cut it to 22% from 30%, for those originating in the United States. Australia has the highest share of India’s lentil imports. Also, the cess on crude palm oil has been reduced to 5% from 7.5%. 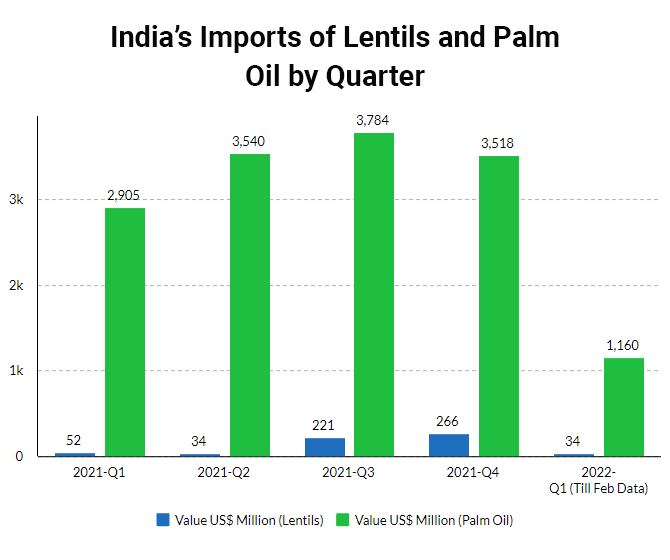 Prices for cooking oils are also on the rise after declining slightly in November 2021. Mustard oil prices have increased to their earlier peak level of Rs 175/kg wholesale. The decision to reduce the duty on imported palm oil is expected to increase domestic refining by 60% as the duty difference between crude palm oil and refined palm oil has been increased to 8.25% from 5.5%.

The domestic prices of lentils have been ruling at Rs 70-73/kg as against the minimum support price of Rs 64/kg. However, as the harvest of a good rabi crop of lentils has started this month, traders are surprised about the timing of duty reduction.

Global crude oil prices – what does it mean for India

Global crude oil prices stood at a record high of $116 a barrel due to the Russia-Ukraine war.  The invasion triggered sanctions from the US and Europe and disrupted energy exports from the world’s third-largest oil producer. Now global prices of crude oil have dropped to $95 a barrel as fears of Russian supply disruptions were temporarily put on the back burner by the coordinated inventory release by several countries and by extension of the Covid-19 lockdown in China.

Other reasons for rising oil prices include – more supply constraints like drone attacks on oil facilities in the UAE, a major oil producer, and an outage on a major oil pipeline linking Saudi Arabia and Turkey.

What does this mean for India? After announcing elections of 5 states – Uttar Pradesh, Punjab, Goa, Uttarakhand, and Manipur, petrol and diesel prices were hiked by Rs10 in 16 days. Today, the price of petrol in Delhi and many other states has been above Rs 100 per litre. The rise in fuel prices will also have a direct impact on inflation as transportation cost increases the prices across all daily needs. 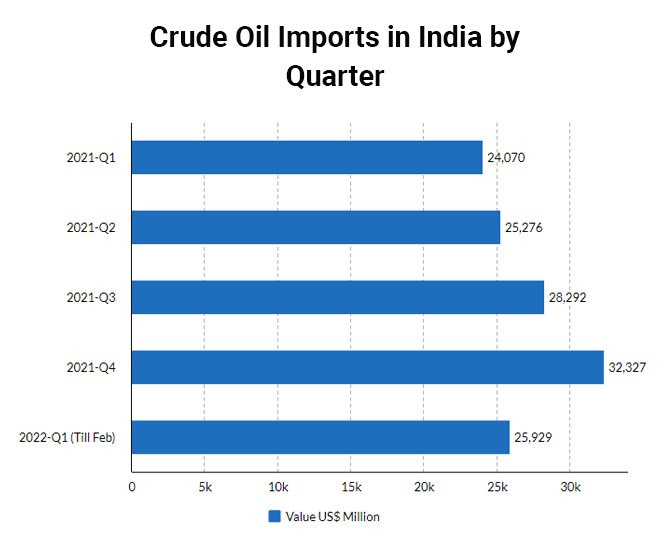 The U.S. inflation reaches a 40-year high – impact on India

Consumer prices in the United States have increased by 7.5% over the past year. This inflation rate is the highest recorded in 40 years in the country. Supply chain headaches, shortage of goods and services, and the rising cost of labour have contributed to the inflation on the supply side of the equation.

What does it mean for India? As the cost of goods increases in the United States, the prices of these goods when they are imported by India are also going to increase. Commodities like pulses, oils, and most importantly fuel, are affected by the increase in global inflation. For the government, the rising price of energy remains a worry as India is a net importer and has to pay huge bills for the import of crude oil.

In today’s modern world, the rise in inflation rates results from various factors including linkage of global economies, country’s local market scenarios, natural calamities, diplomatic tensions, and so on, as we see in the case of India. The U.S. inflation, rise in global crude oil prices, and Russia-Ukraine tensions are some of the important reasons that inflation rates in India have jumped.