Palm oil is one of the world’s most produced and consumed oils. This highly stable, production-efficient and cheap oil is used in a wide variety of cosmetic, food and hygiene goods. It can also be used as source for bio-fuel or bio-diesel. Most palm oil is produced in Africa, Asia and South America because the trees require sunshine, warm temperatures and plenty of rain in order to maximize production. Indonesia is the world’s largest producer and exporter of palm oil but it is also the biggest greenhouse gas emitter after China and the United States. Global palm oil production is dominated by Indonesia and Malaysia. These two countries, together, account for around 85 to 90 percent of total palm oil production on the world.

According to Indonesia palm oil export data, the country is anticipating a boost in exports of the commodity to China, taking advantage of an opportunity opened up by the escalating trade war between Beijing and Washington. This move came after India announced its plans to increase palm oil import tariffs from Indonesia and a bio-fuel phase-out in the European Union (EU). On the other side, China removed palm oil from its import tariff quota management.

For Indonesia, the U.S.-China trade war presents an opportunity to expand beyond a European market that’s become increasingly hostile to palm oil because of its environmental implications. The European Commission passed a measure in March 2019 to phase out palm oil-based bio-fuels by 2030. This measure came over concerns that production of palm oil often on land cleared of rain-forest contributes to worldwide carbon emissions and thus exacerbates climate change.

The Indonesian Palm Oil Association (GAPKI) welcomed the decision of Chinese government to end palm oil import quotas. Exports account for about 70% of Indonesia’s palm oil production, but the government is trying to boost domestic consumption to mitigate demand risks.

Indonesia Palm Oil Exports to India, EU and China in 2018 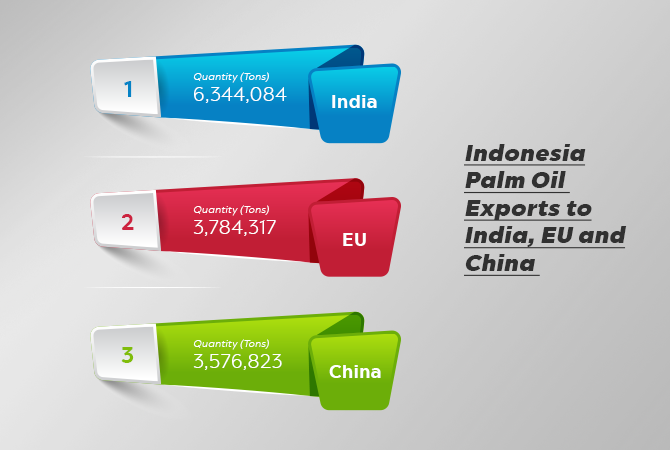 Indonesia Palm Oil Exports to the World in Last 5 Years

The majority of Indonesia’s palm oil output is exported. And the country’s most important palm oil export destination countries are India, Pakistan, China, Malaysia and the Netherlands. Although the numbers are very insignificant, Indonesia also imports some palm oil, primarily from India. In the last five years, the value of Indonesia’s exports of palm oil has increased. Below given chart and table shows quantity of palm oil exported from Indonesia in the last 5 years. 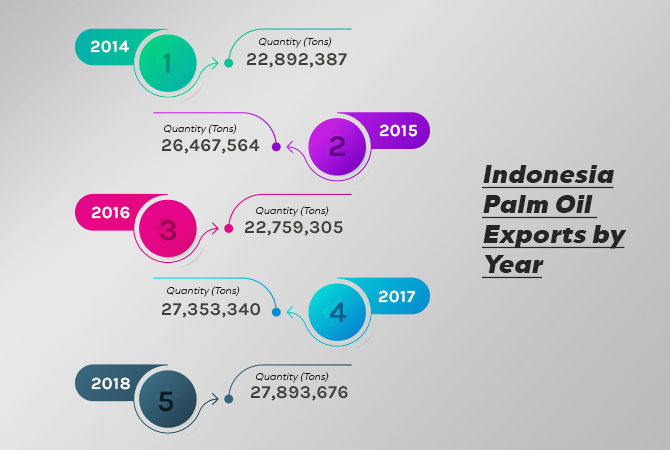 Indonesia’s largest export destination of palm oil is India, which purchased oil worth US$ 3559 million in 2018. Among top 5 Indonesia palm oil export destinations, four countries are from Asian continent. India was followed by China, Pakistan, Bangladesh and Spain. 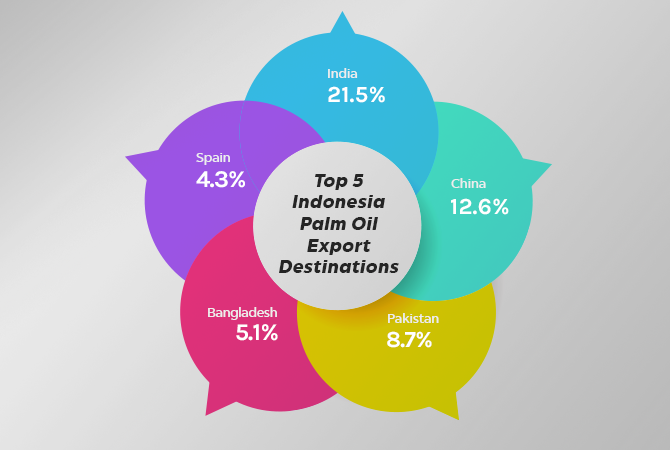 Indonesia customs data reveals that Indonesia is the largest production country of palm oil in the world. In 2018, Indonesia produced 41,500 metric tons of palm oil, followed by Malaysia, Thailand, Colombia and Nigeria. 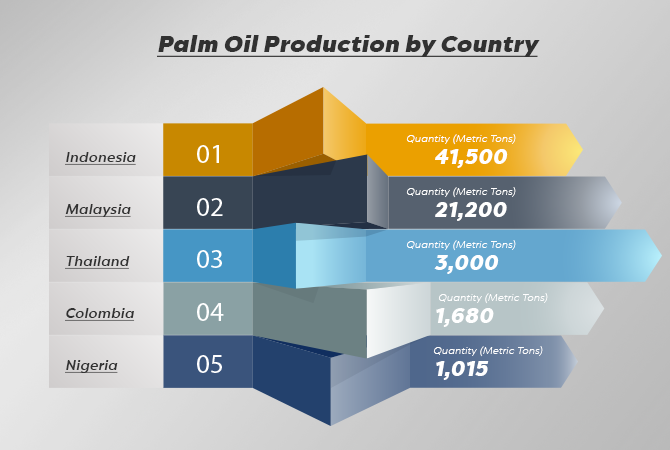 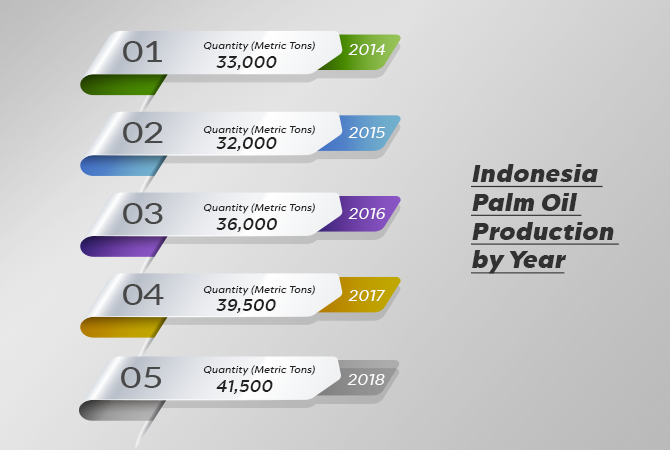 Indonesia’s palm oil plantation and processing industry is a key to the country’s economy. The export of palm oil is an important foreign exchange earner while the industry provides employment opportunities to millions of Indonesians. In terms of agriculture, palm oil is the most important industry of Indonesia contributing between 1.5-2.5 percent of the nation’s gross domestic product (GDP).