Indonesia and Australia have now agreed to speed up the ratification of a bilateral free trade agreement, which was signed early this year. The Indonesia-Australia Comprehensive Economic Partnership Agreement (IA-CEPA) was signed on 4th March 2019 to boost trade and investment between the two countries.

Trade Balance between Indonesia and Australia in Last 5 Years

Indonesia Exports to Australia in 2018

Indonesia exports of mineral fuels and oils to Australia recorded the highest value in 2018. The country shipped fuel and oil worth US$ 636 million to Australia in the given year. Here is the list of top 5 products which are exported by Indonesia to Australia.

Indonesia Imports from Australia in 2018 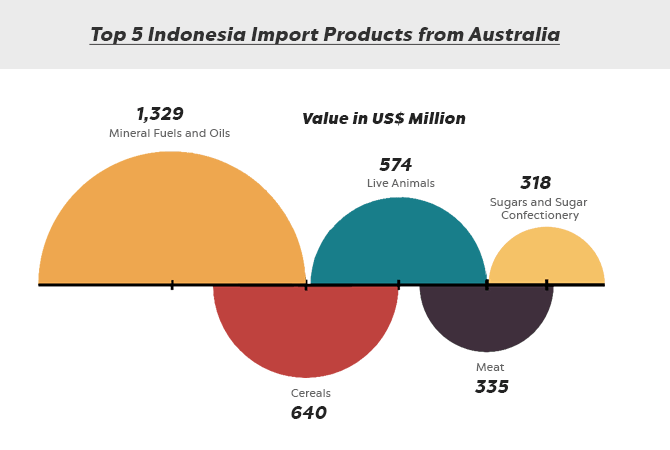 After signing Indonesia-Australia Comprehensive Economic Partnership Agreement early this year, both the countries are now working on boosting this agreement and boosting their bilateral trade. In the coming years, it is expected that economies of both Indonesia and Australia will grow after this agreement.