CIS stands for Commonwealth of Independent States which was founded in 1991 after the dissolution of the Soviet Union. At present, there are 12 members in CIS region including Azerbaijan, Armenia, Russia, Ukraine, Kazakhstan, Belarus, Turkmenistan, Uzbekistan, Georgia, Moldova, Kyrgyzstan and Tajikistan.

The relations between India and CIS countries have remained close and bilateral trade are still to achieve its true potential. Due to various factors such as long distance, language barrier, transport facility, inadequacy of information about business opportunities CIS only records 1% share in India’s total exports and 2.1% share in India’s total imports. Here, we take a comprehensive look at the details analysis of trade between India and CIS countries.

India exports of goods to CIS nations amounted to USD 2276 million during Jan-Sept 2017 while it was USD 2631 million in 2016. Russia, Ukraine, Uzbekistan, Kazakhstan are the main markets in CIS region where India exports goods. Russia is India’s largest export partner in CIS region and India export to Russia recorded USD 1606 million during the same period. However, India goods export to this region is declined by 4% between 2012 and 2016. Here is the table representing list of CIS countries and India CIS export statistics recorded during Q1-Q3 2017. 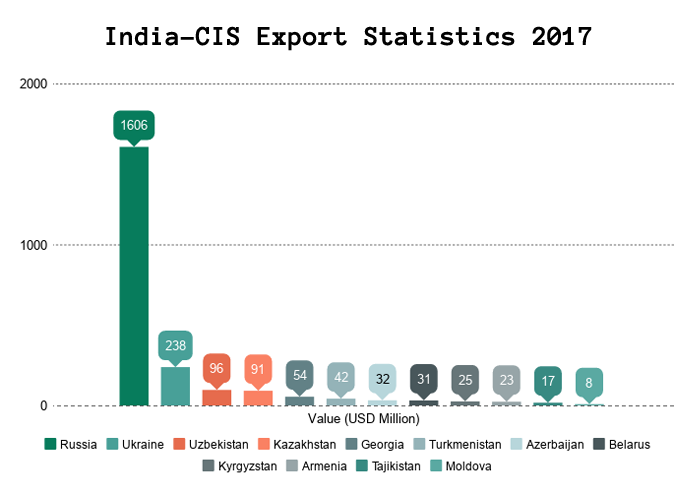 India has imported goods with the value of USD 9411 million between January and September 2017 while it was USD 7594 million in 2016. Russia, Ukraine, Kazakhstan, Azerbaijan and Belarus are the top CIS countries from which India imports goods. As per the trade report released by Export Genius, Russia (In CIS region) is the largest trading partner of India and recorded USD 5937 million during Q1-Q3 2017. Check the following table to know the year 2017 values of India imports from CIS countries. 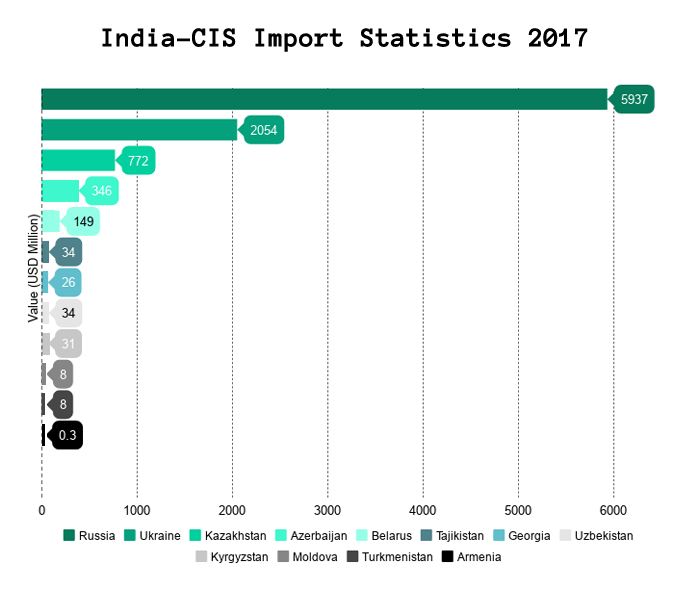 Bilateral Trade between India and Kazakhstan 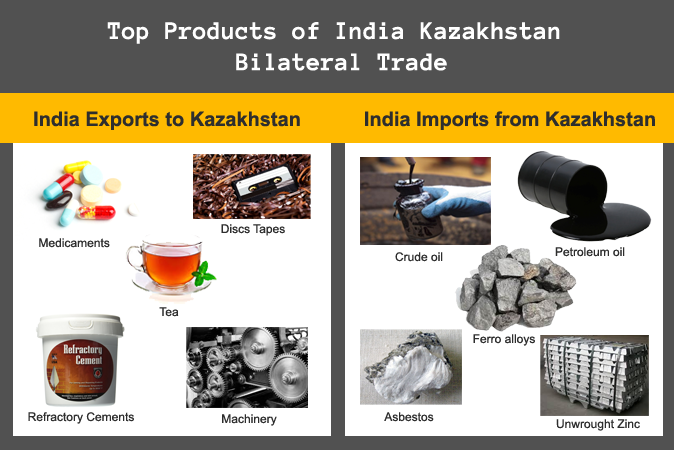 Here, we take a look at the bilateral trade between India and Kazakhstan. India exports to Kazakhstan stood at USD 92 million during Jan-Sept 2017 while it was USD 125 million in 2016. However, India export to this country is declined by 18% between 2012 and 2016. India pharmaceutical industry has remained its market in Kazakhstan and occupied top position. The demand of refractory cements, mortars, concretes etc. have been increased in the last five years and recorded a drastic annual growth by 270% of value from 2012 to 2016.

India Imports from Kazakhstan stood at USD 773 million during Jan-Sept 2017 while it was USD 320 million in 2016 which means India demand of products from this country is doubled as compared to last year. However, India imports from this country have been increased by 11% in terms of value during 2012-2016. Crude oil, petroleum oil, Ferro alloys, asbestos and Unwrought Zinc are India’s most imported products from Kazakhstan. The demand of Ferro alloys in India is increased in last five years.

Bilateral Trade between India and Russia 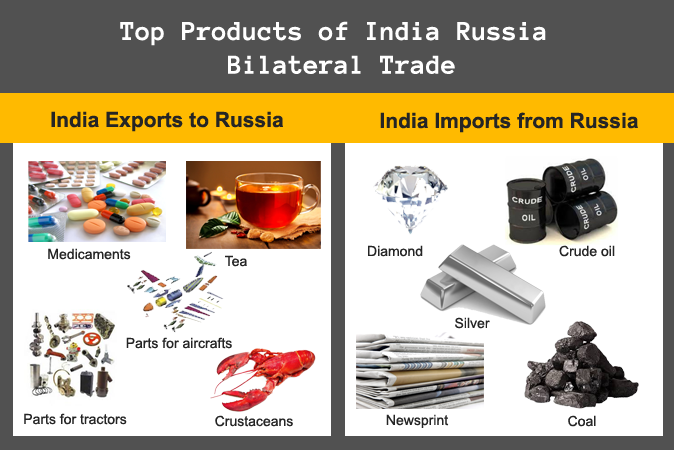 Russia is India’s largest trading country among CIS countries. Russia is one of the biggest markets for India from where the country imports products. India exports to Russia worth USD 1604 million during Jan-Sept 2017 and it was USD 1813 million in 2016. However, India’s export sale to this country is reduced by 7% from 2012 to 2016. Medicaments, tea, parts for tractors & aircrafts and crustaceans are the top products that India exports to Russia.

India Imports from Russia worth USD 5937 million during Jan-Sept 2017 and it was USD 4782 million in 2016. The demand of products from Russia was increased by 3% of value between 2012 and 2016. Diamonds, crude petroleum oil, silver, newsprint and coal are the top import products of India from Russia.

Bilateral Trade between India and Ukraine 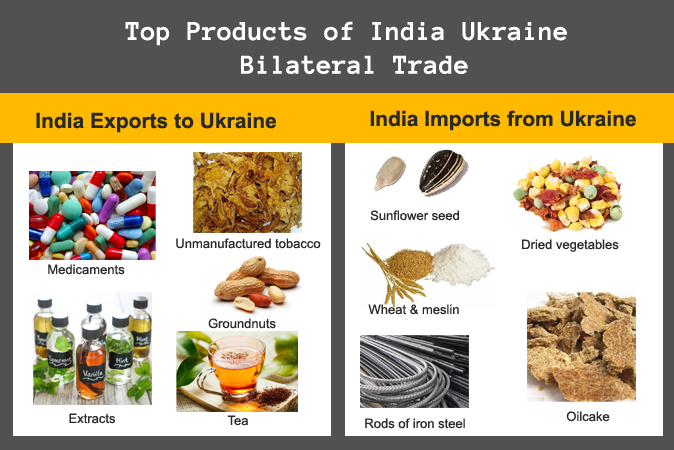 India exports to Ukraine worth USD 238 million during Jan-Sept 2017 while it was USD 291 million in 2016. India’s total exports to Ukraine have been declined by 17% in terms of value between 2012 and 2016. Medicaments, extracts, unmanufactured tobacco, groundnuts and tea are India’s most exported products to Ukraine.

India imports from Ukraine worth USD 2054 million from Jan-Sept 2017 while it was USD 1955 million in 2016. India has reduced its import from this country by 6% of value during 2012-2016. Sunflower seed, wheat & meslin, dried leguminous vegetables, oilcake and rods of iron or alloy steel.

Bilateral Trade between India and Uzbekistan

India imports from Uzbekistan worth USD 34 million during Jan-Sept 2017 and it was USD 46 million in 2016. As the demand for products from this country in India has been increased by 12% from 2012 to 2016. Natural gums, dried leguminous vegetables, raw silk, copper wire and mineral fertilizers are India’s most imported products from Uzbekistan.

We at Export Genius providing the import export data of more than 60 countries. Are you seeking to target the CIS countries market? Get the list of importers or exporters of your product in this market and expand your business. Here is the sample of Kazakhstan imports of tea from India including the major data fields that we cover in our trade report.

The more details like importer name, exporter name, loading & unloading place etc. will be available after purchase only. You need to subscribe with us to get a report on India CIS trade. We provide authentic trade data based on actual shipment records.