India is a home of great spice varieties including Cumin, Red Chilli, Pepper, Turmeric, Green Cardamom, etc. These are the most sought-after in the world for their exquisite texture, aroma, flavour and medicinal value. Traditionally, varieties of Indian spices are grown in small land holdings with organic farming has been gaining prominence nowadays. India is the largest producer and exporter of spices around the globe. It produces more than half of the spice varieties listed by the International Organization for Standardization (ISO). Let’s follow up the Indian spices export statistics – Indian Spices Export Data of Q2 2017.

·         India exports spices mostly to the United States of America.

Top 5 Varieties of Spices in India

Spices export business in India has been on the great edge from the past decades. The country not only the world’s largest producer of spices but it is also the top exporting country of spices globally. If we analyse the latest information available on spices exports from India, we found that cumin is the largest variety of spice exported from India. During Q2 of 2017, it recorded 39% share in value of total spice exports. Let’s analyse export data of top 5 Indian spices list with picture. 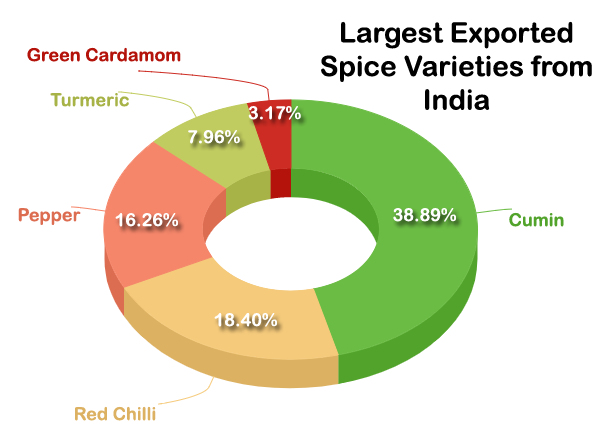 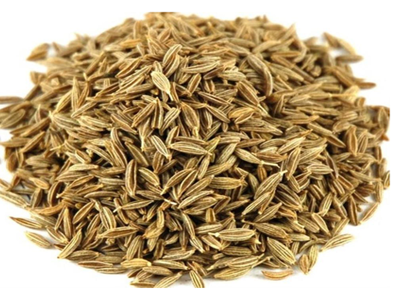 Cumin is the dried and white fruit with greyish brown colour of a small annual herb. In India, it is popular called as Jira or Jeera in Hindi language. It is used as a condiment and an ingredient in curry powders. India is the largest producer of cumin spice.

The cumin export data of India shows that the country exported cumin spice the most in Q2 of 2017. Its total value in USD % and USD stood at 38.89% and 212542273 respectively. The three month export value of cumin is given below:

This means India recorded decline in export value of cumin in May and June. In fact, both the months registered half the value of April month. India exported cumin maximum to the United States of America, which registered 18.61% share in value and USD 101724023 total value. And maximum shipments of cumin took place from Mundra Sea, which recorded 28.48% share in value and USD 155617707 total value. Click on Cumin Export Sample of India to know shipments of the product. 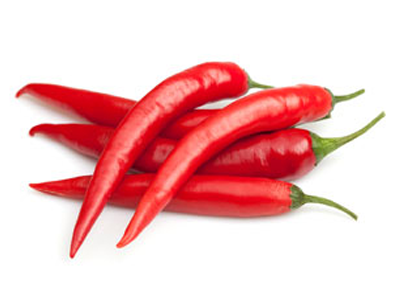 Red Chilli is the fruit, which belongs to the genus Capsicum. It is the member of the nightshade family, Solanaceae. It is widely used in many cuisines to add spiciness to dishes. Red chilli has become famous around the world because of its features like taste, pungency and flavour. Red chill is another variety of spices, which is exported from India.

According to red chilli export data of Q2 2017, it was 2nd most exported variety of spice from India. Its total value in USD % and USD stood at 18.40% and 100577510 respectively. Here are three month figures of red chilli recorded in second quarter of 2017. 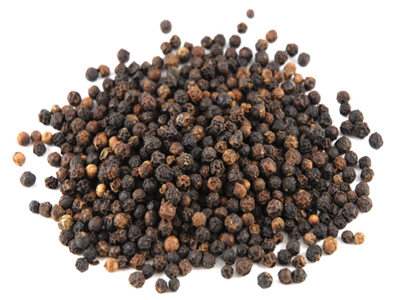 Pepper is a pungent hot-tasting powder and belongs to Piperaceae family. It is prepared from dried & ground peppercorns and used as a spice to flavour cuisines. It is the 3rd most exported variety of spice from India.

As per black pepper export data India, the country registered 16.26% share in value of total spice exports in Q2 of 2017. Its export value stood at USD 88872567 in the given period. The pepper export statistics of India registered in the three months are given below.

So, after rising in the month of May, export value of pepper fell in June month. Like red chilli, India exported pepper mostly to Vietnam in Q2 of 2017. Its value in USD % and USD recorded 6.11% and 33377828 respectively. Kattupalli stood as the largest sea port from where maximum numbers of pepper shipments were departure from India in the said period. Click on Pepper Export Sample of India to understand data fields. 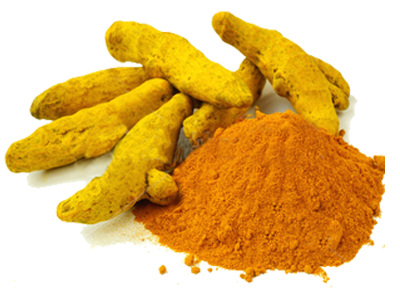 Turmeric is a rhizomatous herbaceous perennial plan, which belongs to the ginger family. It is used as the best Ayurvedic medicine to tread various health disorders. India is the largest producer of turmeric, which is exported as the 4th largest variety of spices.

Turmeric export data of Q2 2017 shows that India recorded 7.96% share in value of this variety of spice. Its export value stood at USD 43525565. Month-wise export values of turmeric are given below.

After rise in export value of turmeric in May, India recorded a decline in value of the product in June month. India’s exports of turmeric were highest to Iran in the second quarter of 2017, which registered USD 5956184 total value. Maximum export shipments valued USD 25395745 of turmeric were recorded from JNPT. Click on Turmeric Export Sample of India to find columns of the data. 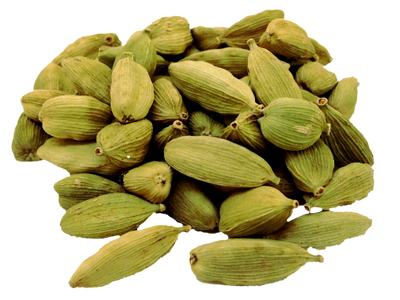 Green Cardamom is seeds from several plants in the genera Elettaria and Amomum family. It is the world’s third most expensive spice. In India, it is widely grown spice and exported all over the world. In fact, green cardamom is the fifth largest variety of spice.

A report on green cardamom export from India shows that the country recorded 3.17% share in value and USD 17327896 total value of this variety of spice in second quarter of 2017. Here is export value of three months.

For your reference, a list of spices exporters in India is given below:

How to Get Spices Export Data of India?

There can be many possible free ways to get list of spices exported from India, like government websites, Indian or foreign embassies, global trade events, etc. but all these resources provide limited information. So, choose a reliable market research company just like Export Genius and get paid spices export data of India with complete shipment records. It provides business intelligence report based on shipping details that are received from valid sources. Following major information on spice exports from India is covered in the data:

·         Which spice varieties in India are exported from the country?

So, whether you want to know turmeric export prices or green cardamom export price in India or simply want to get the list of Indian spices, our report is beneficial. For export samples of Indian spices under chapter 09, visit @ http://www.exportgenius.in/export-data/india/hs-code-09.php.