China is one of the biggest import markets for pharmaceuticals in the world. Recently, the Chinese government has exempted the import tariffs on 28 drugs including all cancer drugs, cancer alkaloid based drugs and imported innovative drugs. It will boost drug exports from India and benefit the Indian pharmaceutical industry which is known for exporting high quality drugs at affordable prices. This will also help to reduce India’s trade deficit with China. India’s trade deficit with recorded USD 64.77 million during the year 2017. China’s move to exempt import tariffs is not only India specific and is applicable to all the member countries of WTO. Both countries also agreed to promote bilateral trade in pharmaceuticals including the purpose of issues of Indian pharma products exports to Chinese markets, Export Genius market research report reveals. This market research company will provide you the pharmaceuticals import export data (based on genuine shipment records) of China, India and 60 more countries.

The decision of Chinese government to remove import duties on key medicines is an attempt to bring down healthcare cost. The exemptions given to import tariffs will bring down drug prices on cancer drugs, cancer alkaloid based drugs and other medicines by at least 20% and the market for antineoplastic drugs, used to fight tumors in China is about USD 19 billion. Since the year 2016, the Chinese government has reached agreements with pharmaceutical companies in China on the prices of various drugs including 17 cancer medicines and adding that 3.5 million new cancer patients are identified in China annually. However, any company from any country can avail this concession. Let’s take a detailed look at India-China pharma bilateral trade.

During joint economic group of meeting, India has pointed concern regarding the long existing trade imbalance with China. India requests for market access and committed to addressing these concerns through the broad framework provided by trade cooperation between these two countries. It means the issue of trade imbalance was discussed in detail and China on its part promised to address the trade gap issue.

India is a global player in generic pharmaceutical manufacturing and having reasons to believe that it has the ability to export low cost, high quality medicines to China. India has sought investments from China and China has agreed to set up the industry park in India to increase investments and bridge trade deficit. Here is the Indian pharmaceuticals export data with China. 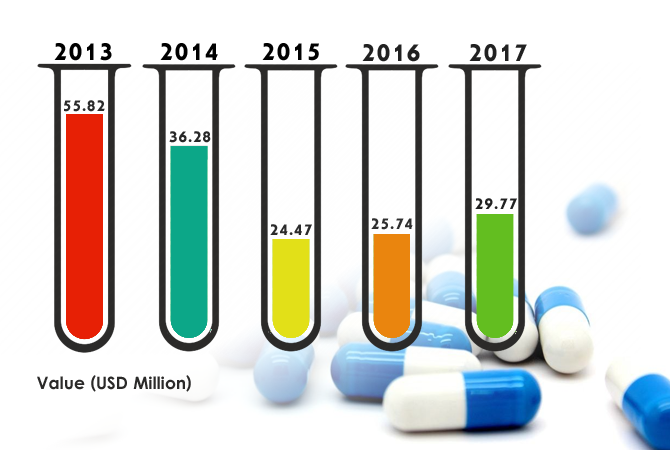 The cost of production of pharmaceutical items in India is nearly 33% lower than that of the USA and labour costs are 50% cheaper than in western countries. Also, the cost of setting up a production plant in India is 40% lower than in the west. India pharma exports to China have been declined between 2013 and 2017.

What are the reasons behind India’s low exports to China? 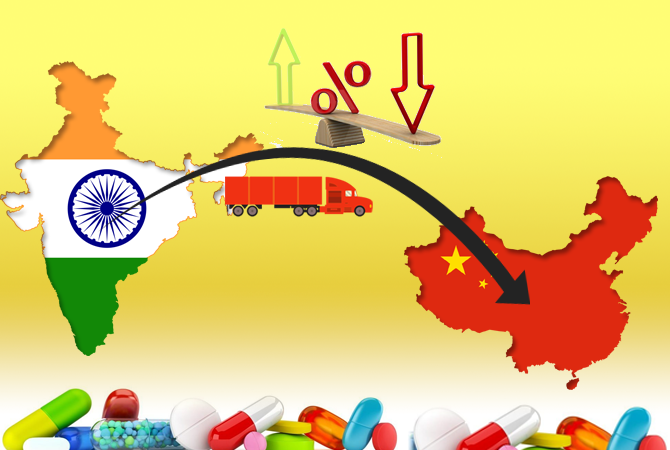 According to pharmaceutical export promotion council of India, 90% of its exports were to North America, Africa, European Union, ASEAN Nations, Latin America, Middle East and CIS Countries. India’s pharmaceuticals exports to Nepal, Myanmar and Bangladesh is more than China during last year. The tariff exemption has more to do with China’s increasing demand for these medicines than any offering to any country.

There are various entry barriers to export into China including high import duties along with regulatory delays and barriers to better penetration of the Chinese market by foreign producers. The exemption of tariff barrier is not the complete solution as Chinese domestic manufacturers sell directly to customers. The traders exporting to China face a complex and highly fragmented distribution system made up of various local distributors and wholesalers. The transportation quality and regulations vary by locality and mark-ups at various stages push up a final cost of the product.

Product approvals, timelines, fees, penalties, analytical procedures are all posing problems for Indian drug companies that are keen to enter Chinese market. China’s priority is not to encourage import of generic medicines. The country wants to attract MNCs to import and manufacture innovative products in China.

How China’s tariff exemption will be beneficial for Indian Exporters?

China import tariff exemption will boost India’s pharma industry exports. Pharmaceutical companies in India can target the Chinese market to boost their business. One of the consistent demands from India in recent years has been fix to growing this trade gap by increasing its share of exports to China. The tariff barrier was the major problem that prevented major companies from making their presence in the world’s 6th biggest market, China.

India is one of the largest drugs export markets but not supplying majorly to China. Pharmaceuticals exporters in India will have opportunity to fulfil the market demand and to cover the Chinese market in all aspects. They need to make contacts with active Chinese buyers and offer them good quality at low prices as compare to other countries exporters.

Finding buyers in China is not a tough job now. At Export Genius, you can easily find the genuine list of pharmaceutical buyers in China with their addresses. Filter the buyers list according to your business requirement and expand your business reach across China. With the help of trade data, you will be able to track the trading activities of Chinese pharma importers. Trade data mainly includes shipment based data fields such as monthly & yearly values, importer name, exporter name, origin country, destination country, loading & unloading place etc.