India and the US are sharing a trade agreement for the trade of commodities in fruits. The trade agreement between both countries involves the sharing of the resources both countries require from each other. These fruits include Indian mangoes and pomegranates exports to the US, while cherries and alfalfa hay, along with pork products from the US to India.

Shown below are the quarterly exports of Indian mangoes to the world for the taken time range. The period ranging from January 2020 to December 2021 covers a time period of 2 years that shows a comparison between the mango’s exports in the year 2020 and 2021.

According to the National Investment Promotion & Facilitation Agency, India’s food processing industry accounts for 10.4% of India’s overall exports and has a share of 32% in India's food market. There is a 15% rise in India’s agricultural and processed food exports, representing in the duration of April 2021 to October 2021, perhaps.

Represented India export data 2021 represents the country’s approximate share value in exports of edible fruits and nuts (Chapter 08) globally for the year of 2021 (till November as per available data). The highest edible fruits exports India recorded in the month of March with an approximate value of 17.02% in overall India’s exports for 2021. There is a constant downfall in values after March till June 2021, from where we see an upward trend till November. 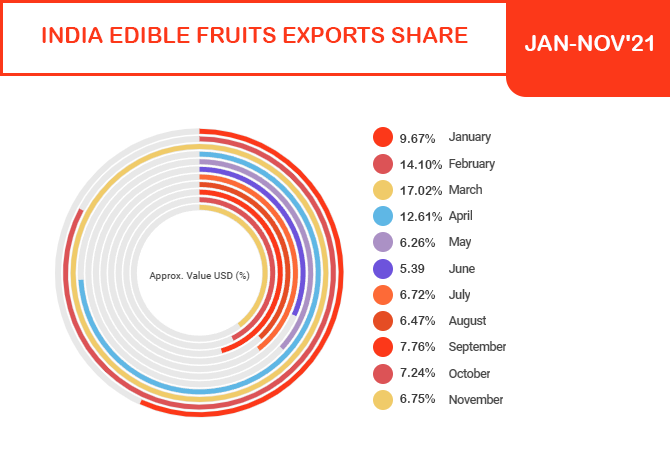 India’s top importing countries for edible fruits and nuts (Chapter 08) are represented in the below provided India export data 2021, with their corresponding export values from India. Top countries that India exports its edible fruits consist of the United Arab Emirates on the top with an export value of $297.57 million, followed by the Netherlands and Bangladesh with respective export values of $184.30 million and $133.10 million for the time period highlighted below, i.e., January to November (2021). The USA is the 7th largest importer of India’s fruits & nuts. 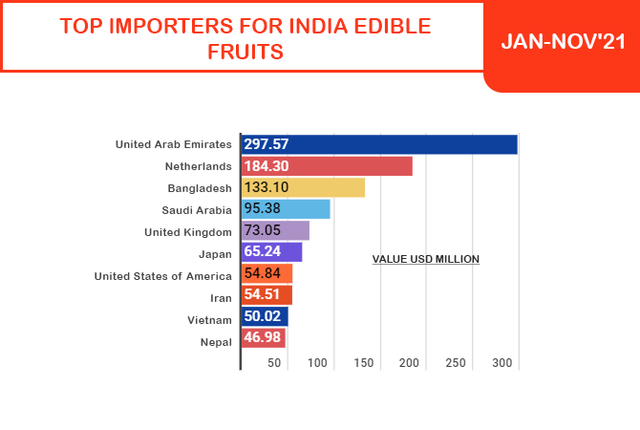 The top exporting countries for edible fruits & nuts (Chapter 08) to India are shown below in the representation of India import data. The USA is pretty evidently the largest exporter of edible fruits & nuts to India as per the time period from January 2020 to November 2021. The USA stands at the top of the list with an import value of $1.85 billion, followed by Afghanistan and Iran with respective values of $0.65 billion and $0.51 billion for India. 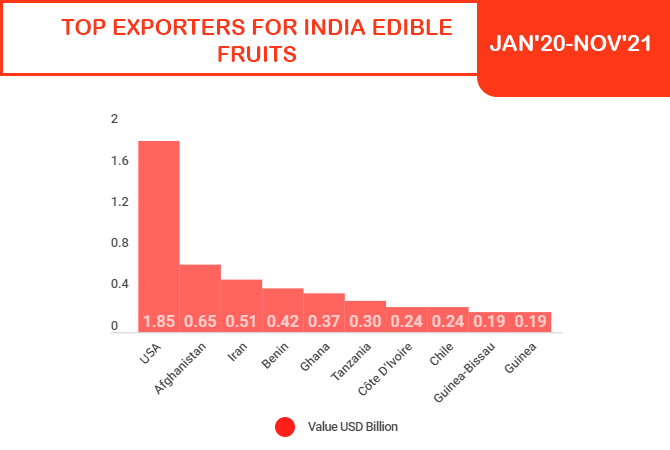 India imports from the US for edible fruits and nuts (Chapter 08) are shown below in the tabular format and graph, both. Evaluated from India import data, the following figures give us an overview of the flow of trend for the US’s edible fruits in India for the time period from January 2020 to November 2021, as per the availability of India trade data. 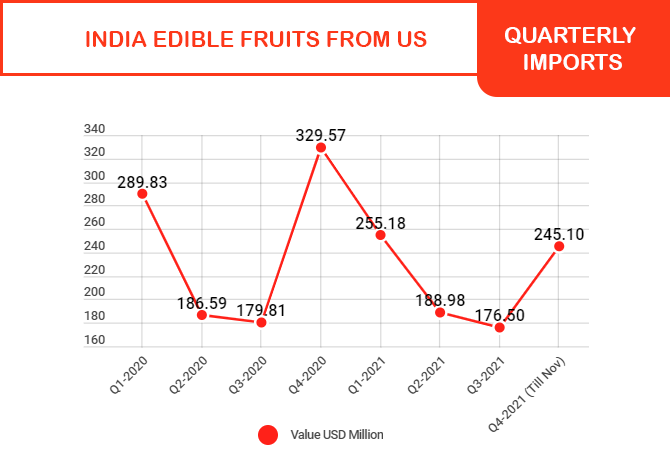 India has also allowed the entry of US’s pork market into India’s markets, marking a benchmark decision of, as stated by the United States Secretary of Agriculture, “removing a longstanding barrier to U.S. agricultural trade.” The official further adds that this is a crucial decision that allows both India and the US to grow US-India bilateral trade relationships.