India and the United Arab Emirates enjoy strong bonds of friendship based on age-old cultural, religious and economic ties between the two nations. The ranking of India’s share in world trade 2017 is 14 (imports) and 20 (exports), while UAE rank 17 (imports) and 16 (exports). Export Genius authentic report on India-UAE bilateral trade shows that India’s total imports from UAE amounted to USD 17593 million and India’s total exports to UAE amounted to USD 23347 million from January to September 2017. And so, bilateral trade value between both the countries stood at USD 40940 million in the said period. Let’s have a clear picture of trade between India and UAE and analyse their business relations.

The United Arab Emirates is the 10th largest investor in India in terms of FDI (Foreign Direct Investment). UAE’s investments in India are concentrated mainly in five sectors:

During Indian PM Modi visit to the UAE in 2015, both the countries have decided to boost trade by 60% over the next five years.

The traditionally close and friendly India-United Arab Emirates relations have evolved into a significant partnership in the economic and commercial sphere. On the occasion of the 6th World Government Summit in Dubai, Indian Prime Minister Narendra Modi visited the United Arab Emirates on February 10 and 11 2018, in which he meet with his counterpart Crown Prince of Abu Dhabi Mohamed Bin Zayed Al Nahyan, who was guest of honour on India’s 68th Republic Day. It was his second visit after 2015, which has decided a new path of India-UAE trade. Both the leaders have agreed to further strengthen their economic and commercial ties especially in the industries of trade, energy, climate and civil aviation. PM Modi has become 2nd Indian Prime Minister who visited UAE after long 34 years. Earlier Mrs. Indira Gandhi visited the UAE in 1981.

Bilateral trade between India and UAE amounted to about USD 53 billion in 2016-17, according to a report prepared by Export Genius. Both the countries have decided to increase trade by 60% over the next five years. India is considered to be the UAE’s primary trade partner, accounting for about 9.8% of its total non-oil trade. It is also the largest importer of products from the UAE, buying about 14.9% of the country’s total exports and about 8.7% of its re-exports. Economists are expecting that the trade between India and the UAE is likely to hit USD 100 billion by 2020.

India ranks 2nd among countries that import products from the UAE, which accounted USD 11255 million value. India UAE trade statistics of 2017 show that the country imported crude petroleum oil and other petroleum products & mineral fuels the most from the UAE. Here are some facts and figures of UAE exports to India. 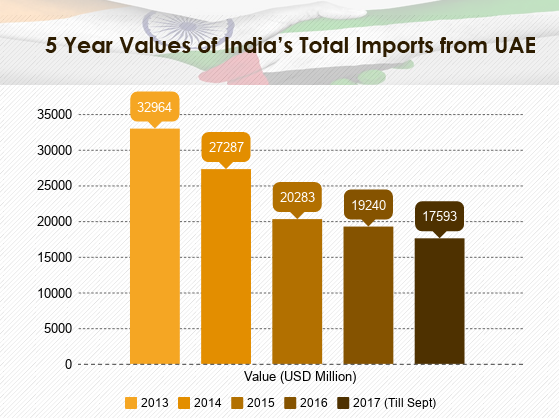 India’s major import products from the UAE are – Petroleum and Petroleum Products, Precious Metals, Stones, Gems & Jewelry, Wood, Chemicals and Minerals. India and UAE relations are basically highlighted from India’s imports of crude petroleum oil, diamonds and gold. In fact, till September 2017, India has imported mineral fuels & oils under Chapter 27 and natural or cultured pearls & precious stones under Chapter 71 valued USD 14827 million together. Here is the list of 10 largest India’s import items from UAE in 2017. 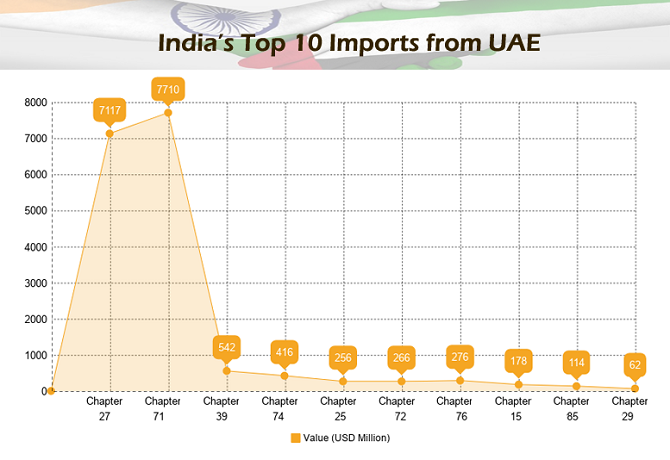 The UAE is also India’s second largest destination for its exports, accounting for about 11.5% of the total imports by the UAE from India. Relationship between UAE and India is basically depend on their trade of natural or cultured pearls & precious stones and mineral fuels & oils that are largest exports from India to UAE. In fact, India buys crude petroleum oil from UAE and at the same time, India supplies petroleum products to UAE. Both the products fall under Chapter 71, according to HS Coding System. Here are some facts and figures of UAE imports from India 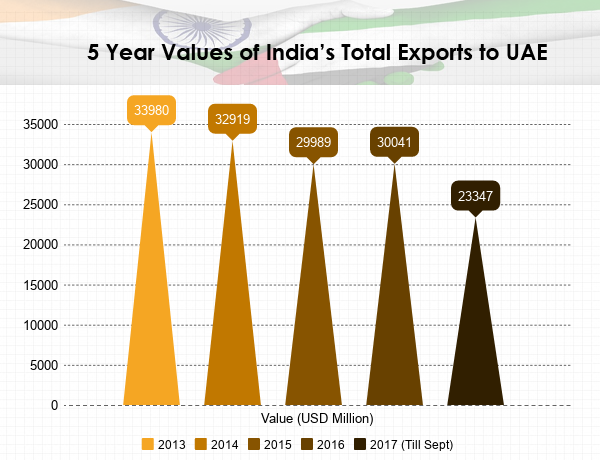 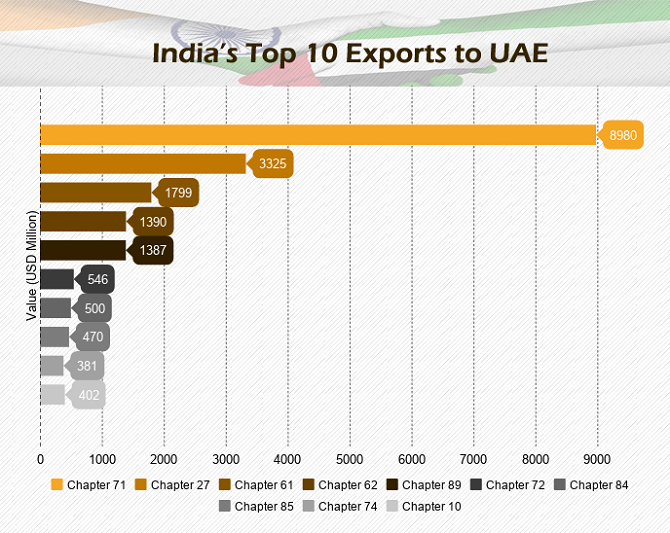 If you want to export any product from India to UAE or import any item from UAE to India, you must have sufficient knowledge about trade between India and Dubai. This is possible from Export Genius report on India UAE imports and exports statistics. Here are key questions that are answered from this report:

1.    How much India exports products to the United Arab Emirates?

2.    How much India imports items from the UAE?

3.    Which are the largest industries of India and UAE?

4.    Who are the importers and exporters in India and UAE?

5.    What is the price of products in Indian and UAE market?

For your reference, see India export sample of HS Code 71011020 (Fresh Water Pearl) in which the United Arab Emirates is the foreign country.

We provide import export data of 60+ countries and customized reports on products of 20+ countries with authentic customs-based details.